Click on the banner above to buy this item!

“The high-end video game market is booming,” says Vincent Zurzolo, COO of ComicConnect, which is handling the Castlevania sale.

When Nintendo released its first Castlevania NES game in 1987, it sold for about $60. Less than 35 years later, an extremely rare, unopened first edition is up for sale for $1,250,000 — right on trend with rapidly-escalating video game values.

“Just a few weeks ago, a graded Super Mario 64 game sold for $1,560,000,” notes Zurzolo. “Castlevania is right up there with Mario and Zelda in terms of desirability — and this particular copy is exceptional.” 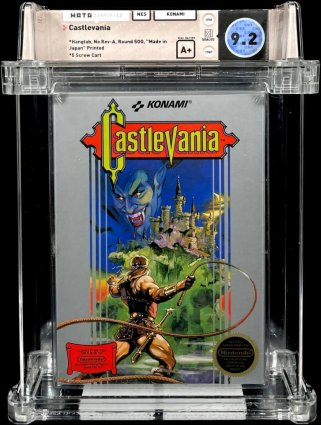 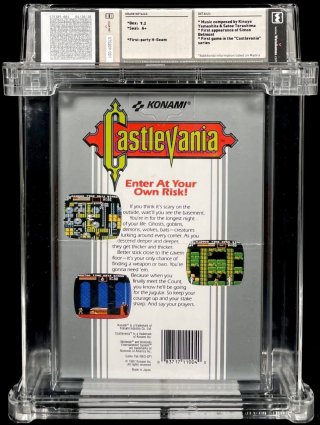 Castlevania was the opening entry in Konami’s still-thriving action-horror franchise. Over the years, it’s spawned dozens of videogames, comics, toys, and anime series. In fact, it is so popular, Netflix recently wrapped up a fourth season of its hit anime series and announced a new spinoff.

Earning a 9.2 A+ Seal Rating from the video-game grading company Wata. This particular copy is the highest graded copy and one of just five graded copies known to exist.

Making it rarer still: it’s what’s known as a third-party hang-tab copy. Produced by a company other than Nintendo, it features a built-in tab for hanging on store shelves. Nearly always, these tabs were popped open when games reached the stores. The fact that this one was left intact makes it an extraordinarily rare find.

Adding to its historical value and rarity: this copy features Nintendo’s original Round SOQ (Seal of Quality), which it changed to an Oval shape in 1989. And it does not feature Nintendo’s REV-A logo, which became standard in 1988 — further proof of its authenticity.

“The protagonist is Simon Belmont, the descendant of a legendary vampire hunter,” says Jeff Maza, ComicConnect's Video Game Expert. “The game is his quest to destroy Count Dracula in his castle.”

Castlevania was a hit from its release and is widely considered one of the best video games of all time.

Through purchasing and consigning multiple video game collections, the ComicConnect team has established itself as a premiere retailer of high-end video games. Castlevania is one of more than 500 graded games recently added to its inventory in a massive 7-figure purchase.

So, if the $1,250,000 price tag is out of your range, you’ll undoubtedly find another favorite childhood video game that’s within reach — but may not be for long. Click here to view all new video games for sale!