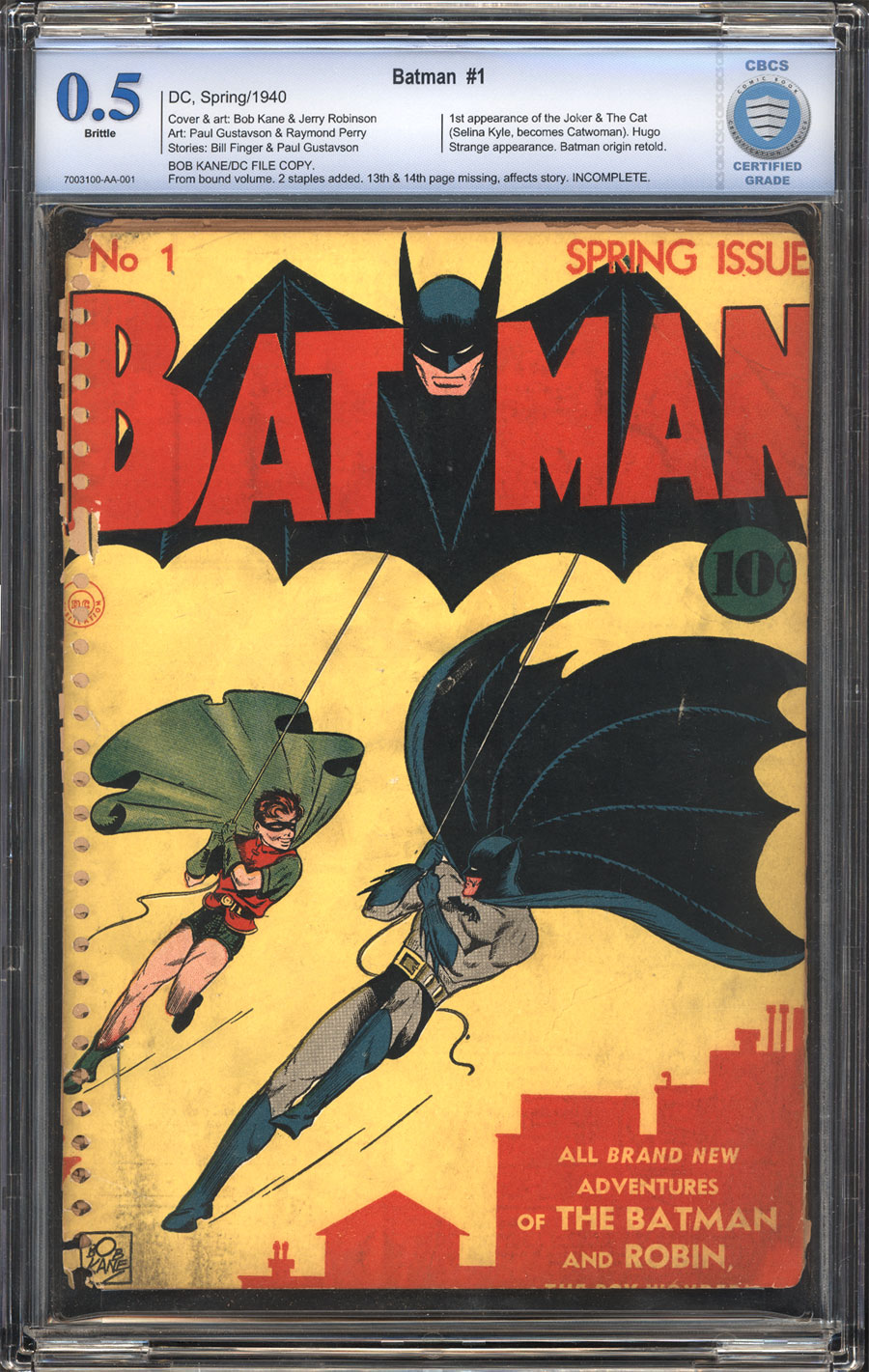 --
Accepting Offers
--
Offers
FYI there's no need to include decimal points(.).
Offer Confirmation
You are about to submit an offer of . If accepted, you are legally obligated to purchase the book. Are you sure you want to continue?
FYI there's no need to include decimal points(.).
Buy Confirmation
You are about to buy this item for , and will be legally obligated under the terms of our User Agreement to pay for it in a timely fashion. Continue?
PUBLISHER: DC
COMMENTS: Bob Kane/DC File Copy from bound volume, trimmed, brittle pages. 2 extra staples added, not manufacturing, 13th & 14th pages missing (affects story) but pages 13, 14 from another copy included)
One of the most iconic covers of the Golden Age! 1st app. Joker; 1st app. Catwoman (Spring 1940); Comic Book Impact rating of 10 (CBI)
Bob Kane File
Read Description ▼
Sell One Of These Inquire About This

Watch
Bob Kane/DC File Copy from bound volume, trimmed, brittle pages. 2 extra staples added, not manufacturing, 13th & 14th pages missing (affects story) but pages 13, 14 from another copy included)
One of the most iconic covers of the Golden Age! 1st app. Joker; 1st app. Catwoman (Spring 1940); Comic Book Impact rating of 10 (CBI)
Bob Kane FileOne of the most famous comics of the Golden Age, featuring one of the most iconic covers, Batman #1 is the perfect cornerstone for any new GA collector; an accessible comic that only increases in value and popularity year after year, featuring the debut of fan favorites the Joker and the Cat, later dubbed Catwoman.

This issue is from the personal collection of Batman creator Bob Kane. While having a Bob Kane File Copy in your collection is a prize in and of itself the bound volume from which it came were gifted to Mr. Kane by DC Comics, so it is also a DC File Copy. Because these items were in a bound volume, the books still retain their striking colors. This is a once in a lifetime opportunity to snatch up not only iconic issues of the Dark Knight himself, which are rare in any grade, but also copies that were touched by the character's co-creator, Bob Kane.


We are sure you have noticed that the comic you are viewing is graded by a new company, CBCS. Comic Book Certification Service (CBCS) is an impartial certification company for comic books started by comic grading veteran Steve Borock. Steve brings over 35 years of comic grading and restoration detection experience to the table and along with his expert staff, combined with Steve, have over 200 years in grading experience. CBCS are well equipped to quickly and accurately grade and perform restoration detection on comic books from the 1930s to present. All comic books are encased in archival-safe, state-of-the-art holders with the CBCS label stating the grade, page quality and any conservation or restoration detected. Key and art comments, as well as any other pertinent information pertaining to the comic book, are also noted. The back of the label has a QR code, so that you can get the grading notes for free and understand how CBCS came to any given grade.

8/7/2014 Correction: Item has been graded by CBCS and is missing 2 pages.
Artists Information