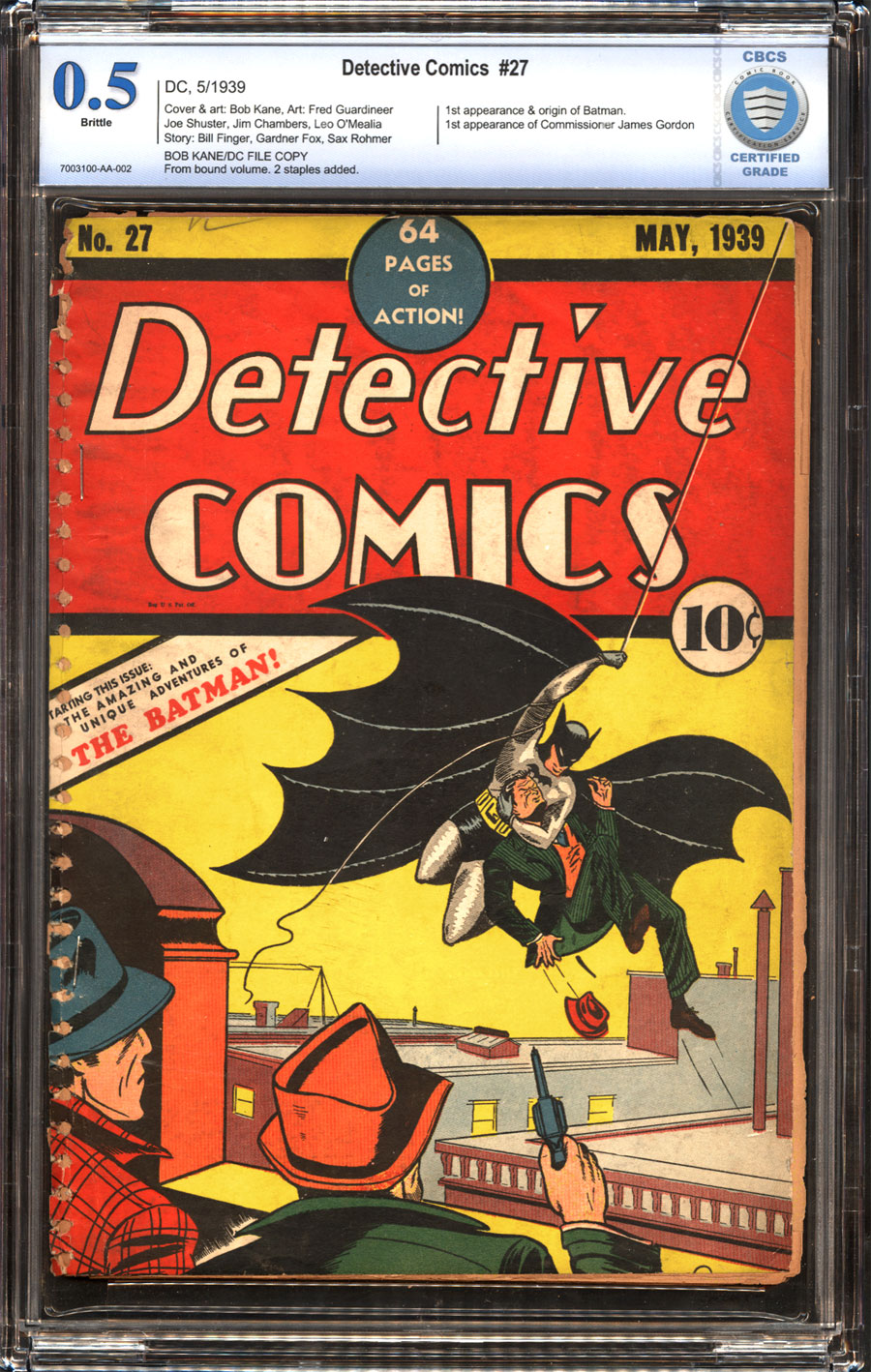 --
Accepting Offers
--
Offers
FYI there's no need to include decimal points(.).
Offer Confirmation
You are about to submit an offer of . If accepted, you are legally obligated to purchase the book. Are you sure you want to continue?
FYI there's no need to include decimal points(.).
Buy Confirmation
You are about to buy this item for , and will be legally obligated under the terms of our User Agreement to pay for it in a timely fashion. Continue?
PUBLISHER: DC
COMMENTS: brittle pgs, from bound volume, 2 extra staples added
1st app Batman by Bob Kane; one of the top three most important comics ever published! Comic Book Impact rating of 10 (CBI)
Bob Kane File
Read Description ▼
Sell One Of These Inquire About This

Watch
brittle pgs, from bound volume, 2 extra staples added
1st app Batman by Bob Kane; one of the top three most important comics ever published! Comic Book Impact rating of 10 (CBI)
Bob Kane FileAfter DC Comics' huge success with Superman, editors were looking for another superhero to cash in on, and young creators Bob Kane and Bill Finger came up with The Batman. The team was inspired by Douglas Fairbanks' portrayal of Zorro, Lee Falk's comic strip The Phantom, Leonardo DaVinci's ornithopter (glider) blueprints which had large bat-like wings, the classic mystery film The Bat Whispers, and the mystery novel The Circular Staircase. As a result, in May of 1939, DC hit pay-dirt again with one of the most memorable and iconic fictional characters in history, Batman! Witnessing the murder of his parents as a child leads millionaire Bruce Wayne to train himself to physical and intellectual perfection and don a bat-themed costume in order to fight crime. Detective Comics #27 is one of the most desirable and valuable comic books to own, an important part of American pop culture history.This issue is from the personal collection of Batman creator Bob Kane. While having a Bob Kane File Copy in your collection is a prize in and of itself the bound volume from which it came were gifted to Mr. Kane by DC Comics, so it is also a DC File Copy. Because these items were in a bound volume, the books still retain their striking colors. This is a once in a lifetime opportunity to snatch up not only iconic issues of the Dark Knight himself, which are rare in any grade, but also copies that were touched by the character's co-creator, Bob Kane. UPDATE: DC's original binder, which contained this issue and was embossed with Bob Kane's name, will be offered to the winning bidder for an additional 2% over the final bid.

We are sure you have noticed that the comic you are viewing is graded by a new company, CBCS. Comic Book Certification Service (CBCS) is an impartial certification company for comic books started by comic grading veteran Steve Borock. Steve brings over 35 years of comic grading and restoration detection experience to the table and along with his expert staff, combined with Steve, have over 200 years in grading experience. CBCS are well equipped to quickly and accurately grade and perform restoration detection on comic books from the 1930s to present. All comic books are encased in archival-safe, state-of-the-art holders with the CBCS label stating the grade, page quality and any conservation or restoration detected. Key and art comments, as well as any other pertinent information pertaining to the comic book, are also noted. The back of the label has a QR code, so that you can get the grading notes for free and understand how CBCS came to any given grade.

8/7/2014 Correction: Item has been graded by CBCS and has updated scans.
Artist Information