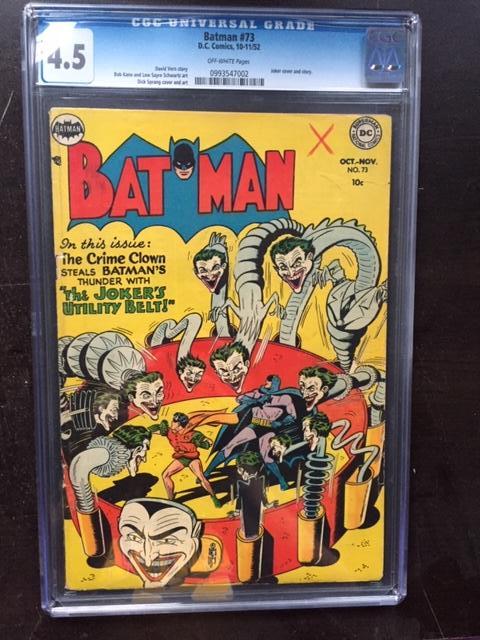 $808.00
Highest Offer
1
Offers
Offer Confirmation
You are about to submit an offer of . If accepted, you are legally obligated to purchase the book. Are you sure you want to continue?
Buy Confirmation
You are about to buy this item for , and will be legally obligated under the terms of our User Agreement to pay for it in a timely fashion. Continue?
PUBLISHER: DC
COMMENTS: Off-White pages
classic Dick Sprang Joker cvr
Read Description ▼
Sell One Of These Inquire About This

Watch
Off-White pages
classic Dick Sprang Joker cvrCover pencils by Dick Sprang, inks by Charles Paris. What Do You Know about Other People? public service announcement with Binky, script by Schiff, art by Mortimer. "Guns For Hire!", pencils by Sprang, inks by Paris; Gotham City criminals have developed a new method of committing crimes with rented firearms; Batman and Robin start investigating the case without success until Bruce disguises himself as a criminal. . "Vicki Vale's Secret!", script by David Vern, pencils by Bob Kane (Batman and Robin figures only) and Lew Sayre Schwartz, inks by Charles Paris; Vicki Vale goes to Wayne Manor, desperately looking for help; She explains that she has brought doom upon herself, but passes out before saying anything else; Bruce and Dick leave her with Alfred while they investigate at Vicki's house as Batman and Robin. "The Joker's Utility Belt!",
Artist Information