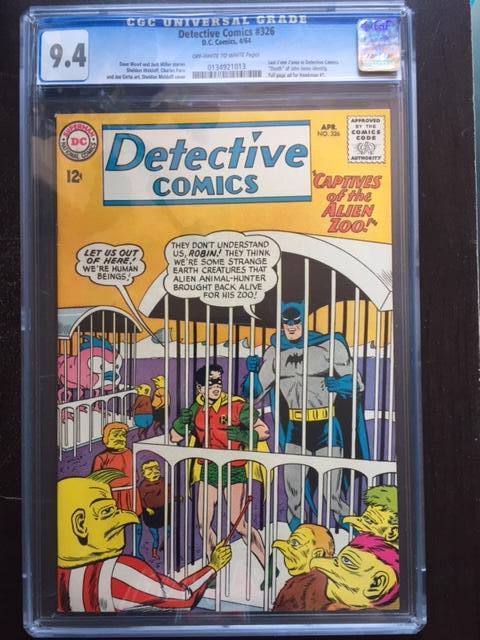 --
Accepting Offers
--
Offers
FYI there's no need to include decimal points(.).
Offer Confirmation
You are about to submit an offer of . If accepted, you are legally obligated to purchase the book. Are you sure you want to continue?
FYI there's no need to include decimal points(.).
Buy Confirmation
You are about to buy this item for , and will be legally obligated under the terms of our User Agreement to pay for it in a timely fashion. Continue?
PUBLISHER: DC
COMMENTS: Off-White to White pages
Moldoff sci-fi cover; last Golden Age costume; last Martian Manhunter in title
Read Description ▼
Sell One Of These Inquire About This

Watch
Off-White to White pages
Moldoff sci-fi cover; last Golden Age costume; last Martian Manhunter in titleCover art by Sheldon Moldoff. The Golden Rule public service announcement starring Bob Hope, script by Jack Schiff, art by Mort Drucker. "Captives of the Alien Zoo!" starring Batman and Robin, script by Dave Wood, pencils by Sheldon Moldoff, inks by Charles Paris; Batman and Robin are mistaken for two-legged animals by alien hunters, are captured and are placed on display in an alien zoo; The Dynamic Duo manage to escape the alien zoo and they are able to locate the authorities of the alien planet, who inform them that the hunters that captured them are in fact criminals who use exotic animals for their crimes; Batman and Robin help the authorities of this world to capture the criminals and later they are sent back to Earth on a special spaceship. Casey the Cop humor page by Henry Boltinoff. Four-Legged Sleuth article. "The Death of John Jones, Detective" starring John Jones Manhunter from Mars, script by Jack Miller, art by Joe Certa; A criminal steals the idol head of Diabolu unaware that once it's opened it will release an ancient evil at each full moon; Jones is apparently killed by the first monster. Manhunter vows to hunt down each monster until he finally finds the idol head.
Artist Information