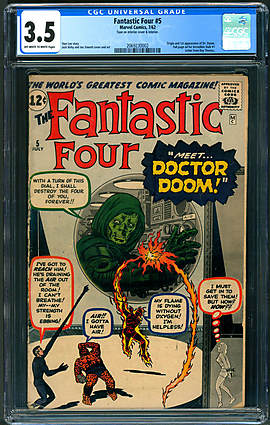 $3,200.00
Last Bid
14
Bids
This auction has ended.
This listing has been remove from the website.
PUBLISHER: Marvel
COMMENTS: ow/white pgs; tp on int cvr and int
Origin & 1st Dr. Doom; bondage cover (7/62); Dr. Doom Movie Rumors!
Read Description ▼
Sell One Of These Inquire About This

DESCRIPTION
Share This:
ow/white pgs; tp on int cvr and int
Origin & 1st Dr. Doom; bondage cover (7/62); Dr. Doom Movie Rumors!Dr. Doom, according to Jack Kirby, was modeled after the Middle Age concept of Death, hence the skull-like mask and hood. Kirby claimed that Doom, a genius inventor, sorcerer, and leader of Latveria, is inherently evil, and as a result of his facial disfigurement and hatred for Reed Richards, he lashes out against the world in perpetual vengeance. He is one of comics' greatest and most complex villains ever created and he makes his debut here in Fantastic Four #5. Created by the team of Kirby and Stan Lee, this character has been copied and imitated many times over the last fifty years, most notably as one of Lucasfilm's inspirations in creating Darth Vader. This era of Kirby covers defined the industry aesthetic of the period and the dynamic composition informs the reader of what they can expect inside the book's hallowed pages.