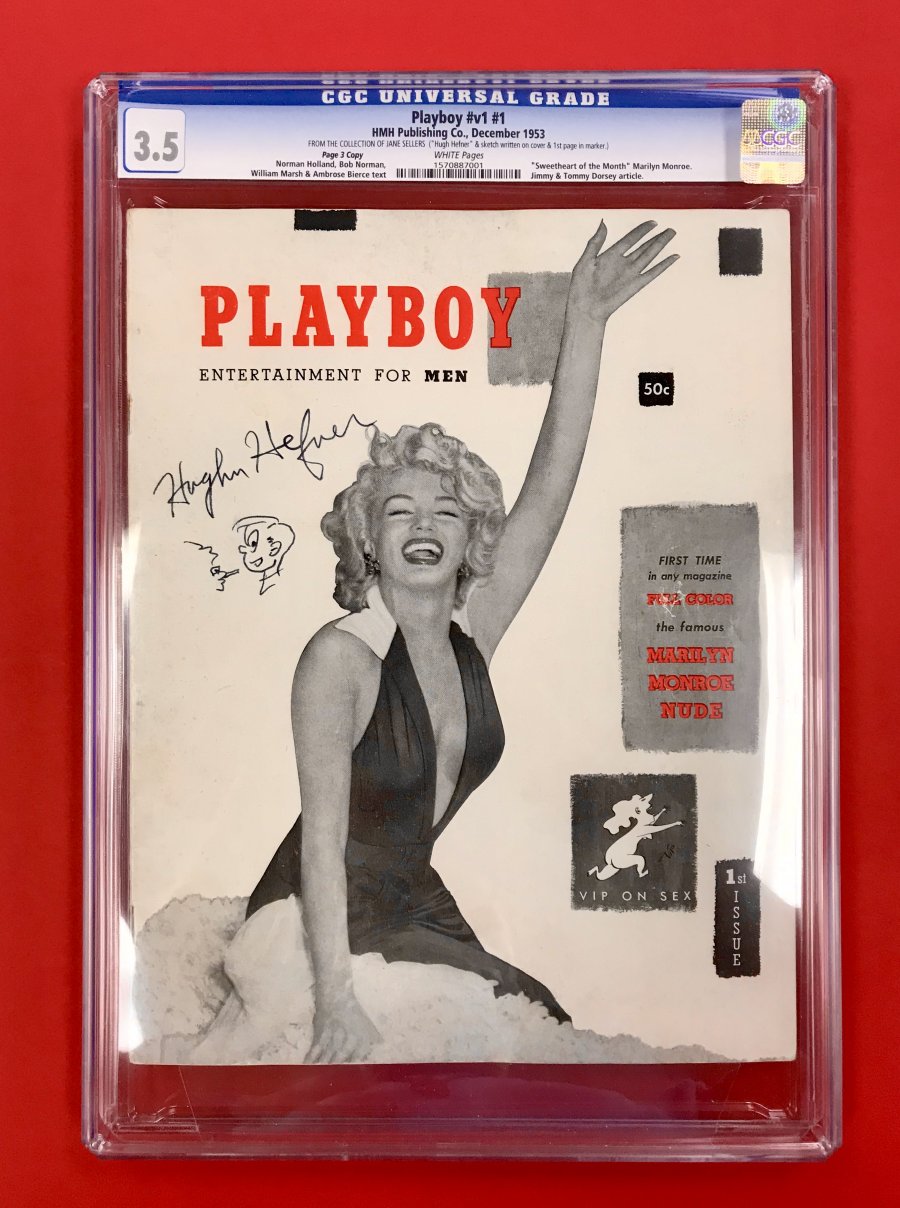 --
Accepting Offers
--
Offers
FYI there's no need to include decimal points(.).
Offer Confirmation
You are about to submit an offer of . If accepted, you are legally obligated to purchase the book. Are you sure you want to continue?
FYI there's no need to include decimal points(.).
Buy Confirmation
You are about to buy this item for , and will be legally obligated under the terms of our User Agreement to pay for it in a timely fashion. Continue?
PUBLISHER: HMH Publishing Co.
COMMENTS: World's Only Playboy TWICE Hugh Hefner Autographed and TWICE Hugh Hefner Caricatured. white pgs; original owner, Eldon Sellers, the man who named Playboy, Original Notes written Hugh Hefner, photograph of pg. 3 showing 2nd signature.
"Sweetheart of the Month" Marilyn Monroe
Read Description ▼
Sell One Of These Inquire About This

Watch
World's Only Playboy TWICE Hugh Hefner Autographed and TWICE Hugh Hefner Caricatured. white pgs; original owner, Eldon Sellers, the man who named Playboy, Original Notes written Hugh Hefner, photograph of pg. 3 showing 2nd signature.
"Sweetheart of the Month" Marilyn MonroeMarilyn Monroe. We know her, and we love her, that is one of the reasons she was chosen by Hugh Hefner to grace the cover of the very first Playboy Magazine. The premiere of Playboy was undated as Hef was unsure there would be a second issue when he put this magazine together in his kitchen in Hyde Park. The centerfold was not original content produced for Playboy, but was actually an unused image from a photoshoot for Monroe's popular calendar. The marketing strategy was centered around the starlet's nudity and, the strategy worked, Playboy was a respectable success, the first issue sold out within weeks of release. Since the known circulation was less than 55,000 that makes this example an amazing find.

Inside, as well, there is "Sherlock Holmes" fiction by Sir Arthur Conan Doyle, "VIP On Sex" cartoons by Virgil Partch, a "Big Band" article featuring Tommy and Jimmy Dorsey, sports ("The Return of the All-Purpose Back") and much more. Here, then, is "The Holy Grail" of all Playboys, the magazine that launched the Playboy Empire and a must for any true collector of Americana!

World's Only December 1953 #1 Playboy TWICE Hugh Hefner Autographed and TWICE Hugh Hefner Caricatured. Eldon Sellers, man who named Playboy, original owner of this #1 Playboy magazine: Eldon gave it to his ex-wife, Janie, and Janie sent it to Hef and the rest is history! CGC Label Provenance.

Items in the Offering:
(1) CGC 3.5 Universal (Blue Label) Grade "PAGE 3" v1#1 PLAYBOY Magazine (December,1953). WHITE Pages. Certification#:1570887001.
(2) Original Typed, Signed & Dated Statement Transferring Ownership of this #1 Playboy from Jane Sellers to her son, Rorick Sellers.
(3) Original personal notes: "To Janie - with love, Hef", written by Hugh Hefner on an HMH sheet of Playboy notepad and a note ("Jane - Here's the magazine!") from Hef's personal assistant, Peter Glassberg, written in pencil, that also came with this magazine.
(4) Photograph of page 3 of this magazine showing second Hugh Hefner autograph and accompanying pipe-smoking bunny on this page. This photo was taken prior to this magazine being sent to CGC for grading and encapsulation.
(5) 5 Playboy books personally signed by Hugh Hefner to Janie Sellers over the years & commemorating their lifelong friendship.

This Playboy magazine was originally owned by Eldon Sellers...yes, the same Eldon Sellers who came up with the name "Playboy" for this iconic American magazine. It is one of the first ones printed, as evidenced by its being a "Page 3" #1 Playboy. Eldon gave this Playboy magazine to Jane Sellers, his wife. When Janie sent her ungraded #1 Playboy to her lifelong friend Hugh Hefner, she asked him to sign it. What he did, instead, was portray the depth of his feelings for her by creating something that he never had done, nor would ever do, for another person. To say that there is nothing even remotely like it is an understatement of immense proportions.

This Playboy magazine has had four owners; Eldon Sellers, Jane Sellers, Rorick Sellers (their son) and now, the current owner. The Sellers family owned it for 65 years (December,1953 to December, 2018), and now it is in the current owner's possession. Are you its next owner?