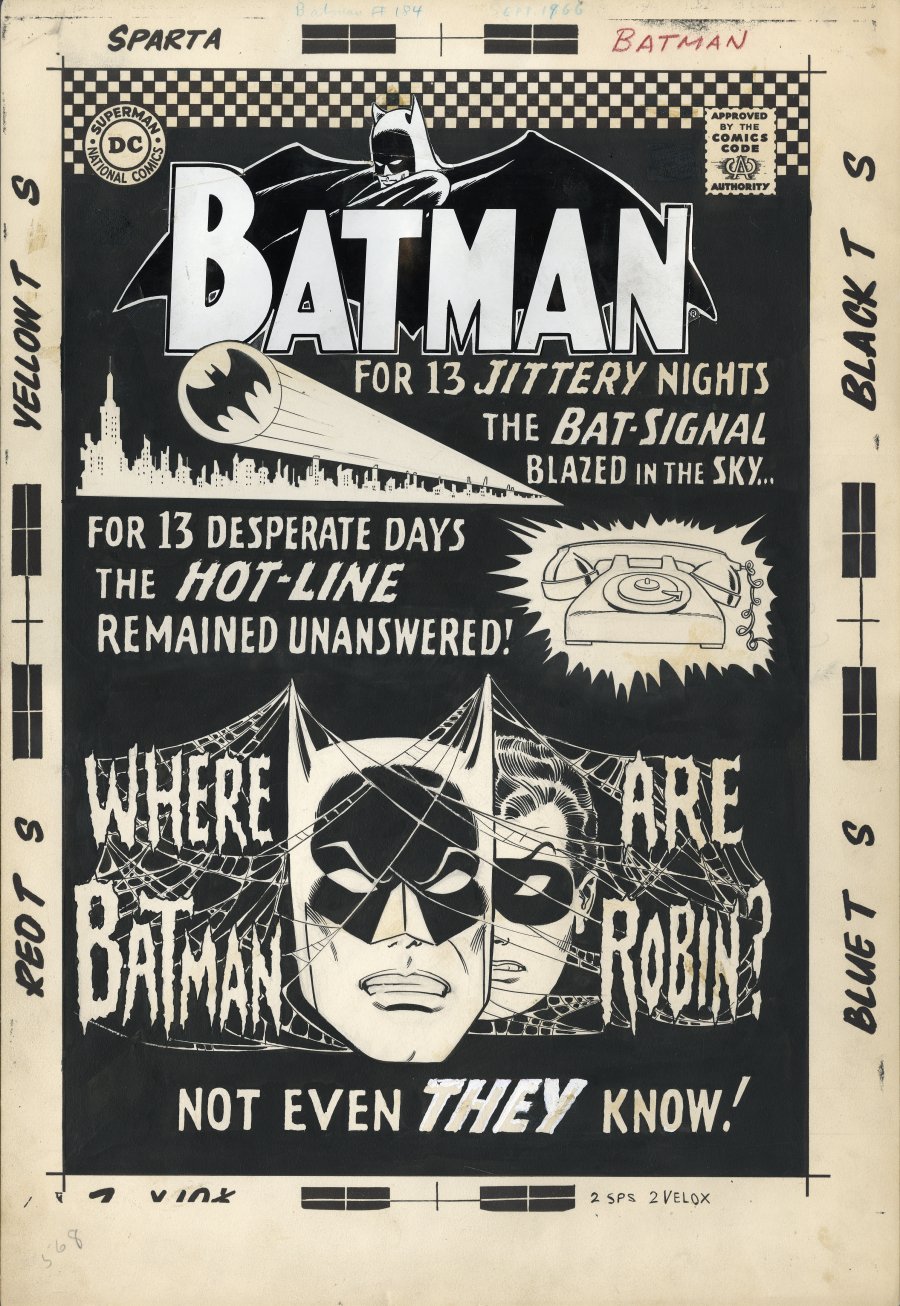 Watch
Carmine Infantino pencils/Murphy Anderson/Joe Giella inks; cover; 1966; image size 18.5" x 12.5"'Where are Batman and Robin? Not even they know!'

Extraordinary Batman cover by Infantino from 1966, with inks by what we believe to be a combination of Murphy Anderson and Joe Giella. There is a signature box in the artwork with Giella's name in it that is blacked over, this is likely due to the fact that it was a collaboration of the two over Infantino. Anderson and Giella were two of the finest inkers of DC's Silver Age, they each had a distinctive hand in defining the look of the era. Arguably the most important DC artist of the Silver Age was Infantino, whose introduction of Barry Allen as The Flash kicked the whole thing off, he would then go on to almost single-handedly transform the look of the entire line of titles.

ComicConnect’s owner, Vincent Zurzolo, received a call from a gentleman who started the conversation by telling him that due to the pandemic he was stuck at home and cleaning out old boxes in his closets. As he sifted through box after box, mostly filled with old clothes and other junk, he came upon a few interesting pieces of pop culture memorabilia. As a boy he loved the Batman TV series and he unearthed a few yellowed autographed photos of Bat-Villains like Burgess Meredith as the Penguin. Then he found what he thought was a large print, but after some cursory research he realized he had the original cover art to Batman 184 from 1966 by the legendary team of Carmine Infantino and Murphy Anderson! When you think of all the things that could have happened to it sitting in a box for over 50 years it was quite a find. When asked how it came into his possession he explained that his father wrote a letter to DC and they sent him the art. DC, as well as Marvel, did give away art done back in the day! What Bat-tastic luck to actually get a cover!

The cover features dark, lush inking and webbing create a mysterious atmosphere daring you to buy the book to learn what nefarious plot has been unfurled against our heroes. The cover is an instant Infantino classic with a go-go check banner as well as a silhouette of the Gotham cityscape, the Bat Signal and the Bat Phone. All evoking nostalgic memories of the great 60's TV show featuring the caped crusaders! In fact, when Adam West, star TV series was asked what were his favorite Batman comic covers, he replied Batman 1 and 184. He said he loved 184 because it reminded him of the TV show and, of course, because Batman looked like him!

Pen and ink. Art is in excellent condition. The logo stat is original.