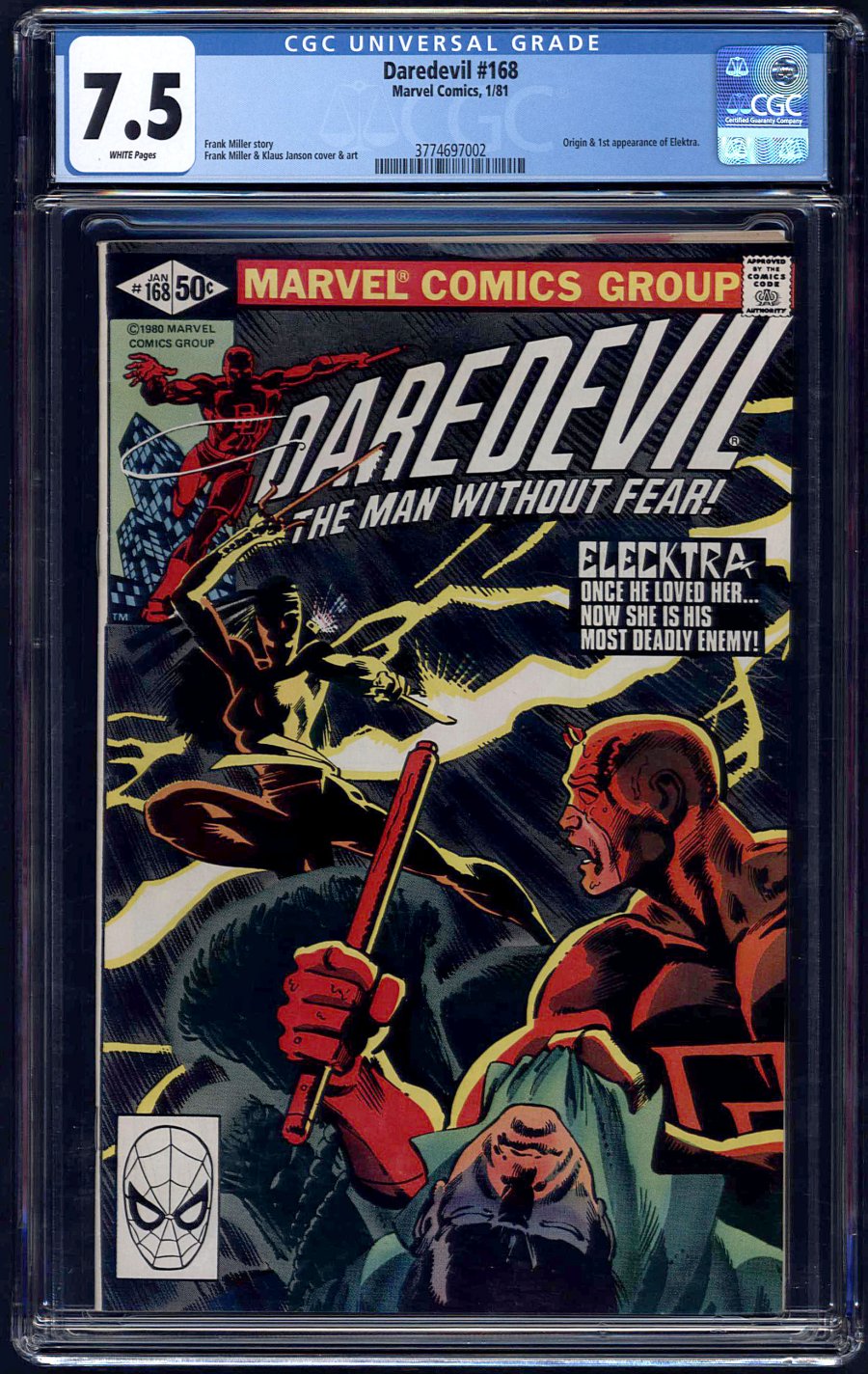 Auction Ends In
$39
Current Bid
9
Bids
NEXT MIN. BID: $40
FYI there's no need to include decimal points(.).
Bid Confirmation
You are about to submit a bid of . If you win this auction, you are legally obligated to purchase the book. Are you sure you want to continue?
Don't Show Again (except when higher than min. bid)
(No Reserve)
PUBLISHER: Marvel
COMMENTS: A 15% BUYER'S PREMIUM WILL BE ADDED TO THIS ITEM AT CONCLUSION OF THE AUCTION
white pgs
origin and 1st app. Elektra by Frank Miller
Kentucky Collection
Read Description ▼
Sell One Of These Inquire About This

Watch
A 15% BUYER'S PREMIUM WILL BE ADDED TO THIS ITEM AT CONCLUSION OF THE AUCTION
white pgs
origin and 1st app. Elektra by Frank Miller
Kentucky CollectionFor those comic book fans who were around when Frank Miller took the reins of the Daredevil series, it is remembered as a moment in the industry that was a certifiable game changer. Miller, previous to his run on DD, had been honing his craft as a bullpen artist for Marvel, doing spot work on a variety of titles, but once he became the main artist for the sagging Daredevil, he came into his own, and changed the landscape of comics forever. His sparse and emotional style lent itself to a wide palette of techniques, playing with panel design, and employing a surreal manga-influenced approach, Miller turned Daredevil into a hot ticket as well as an enduring topic of conversation around the comic book community. In issue #168, he introduces one of his most enduring characters, the tragic and magnificent Elektra, love interest and deadly opponent of Matt Murdock. Elektra originally lived for just a handful of issues, meeting her fate at the hands of Bullseye, but was resurrected, rebooted, retconned and reincarnated repeatedly, as you just can’t keep a good character down. The sai-wielding assassin just refuses to stay dead. And this is where it all began. The fate of Daredevil is currently a big question mark thanks to Disney+ pulling the plug on Netflix’s hit series, but odds are that ‘ol Hornhead will show up again in the MCU, and, it stands to reason, his popular paramour will not be far behind.