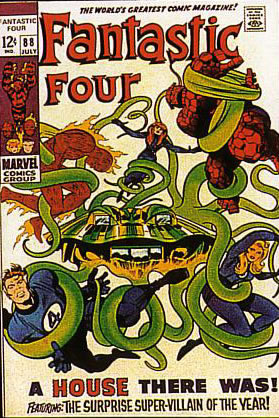 $63
Sold For
1
Offers
PUBLISHER: Marvel
COMMENTS: Off white pages
Kirby cvr/art; Mole Man app.
Read Description ▼
Sell One Of These Inquire About This

Watch
Off white pages
Kirby cvr/art; Mole Man app."A House There Was!" Script by Stan Lee. Pencils by Jack Kirby. Inks by Joe Sinnott. Cover by Jack Kirby and Joe Sinnott. A jubilant Fantastic Four reunite with baby Franklin and Alicia after their episode in Latveria ended last issue! Reed, Sue, Ben, Johnny, and Crystal are ready for some rest, relaxation, and house-hunting! Following a realtor's tip, the Invisible Girl leads the team to a contemporary house located in a secluded forest. Seems like a strange place for a modern house. But everything goes smooth as Reed and Sue move in and then sit down for their first meal with Johnny and Crystal. However, shortly thereafter everything goes dark! The foursome are suddenly blind! Who owns this house?! Could there be a mole inside? Or perhaps more specifically…a mole man? Last 12¢ issue.
Artist Information