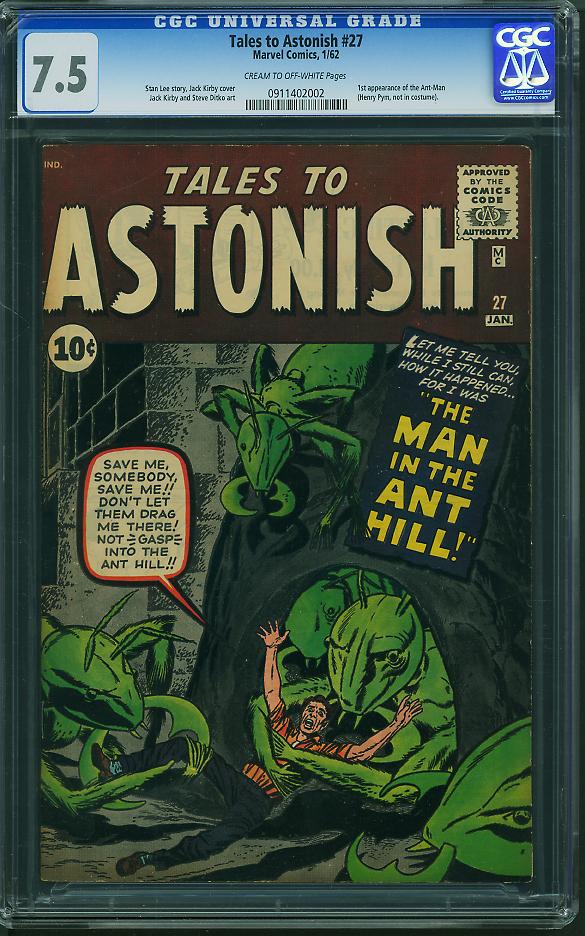 $3,891.64
Sold For
23
Bids
This auction has ended.
PUBLISHER: Marvel
COMMENTS: CGC #0911402002, Universal Holder, Cream to Off-White pages
Read Description ▼
Sell One Of These Inquire About This

Watch
CGC #0911402002, Universal Holder, Cream to Off-White pagesThis is the great "hidden" success story of Marvel keys -- at nearly every convention we've attended in the past ten years, this book has sold quickly, it ends up on pretty much every want list we get. Even before Marvel's recent reinvention of the character, this was the secret key, rarer than most, and seemingly in huge if subtle demand. Not anymore -- this book has now exploded in desirability and value, thanks both to its scarcity and the sudden resurgence of interest in Ant-Man. The cover of this classic book hearkens back to the sci-fi monster mashes of the 1950s that were popping up like weeds all over the TV dial at the time of this issue's publication. It's likely that Lee and Kirby were trying to cash in on the popularity of giant-bug movies among their adolescent readership, but also retain the flexibility to sneak the anthology title slowly into the superhero realm that would prove to be Marvel's bread and butter before too long.
Artist Information