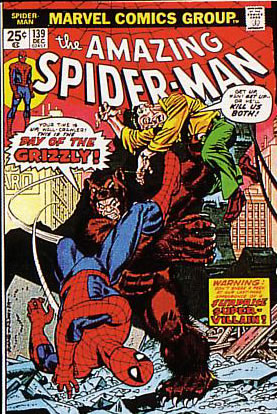 Watch
wtr stns; rsty stpl
Gil Kane/John Romita cvr; 1st app. of the Grizzly (Maxwell 'Crazy Max' Markham)"Day of the Grizzly!" Part 1 of 2. Script by Gerry Conway. Pencils by Ross Andru. Inks by Frank Giacoia and Dave Hunt (backgrounds). Cover by Gil Kane (pencils) and John Romita Sr. (inks). Peter Parker finds a new place to live at 410 Chelsea Street! And when he stops by the Daily Bugle to tell his friends...the Grizzly attacks! Whoa, were did this 9-foot super-villain come from? There's no time for questions or answers as the web-slinger leaps into action! But the Grizzly is loaded for bear and then some! All the amazing one can do is save J. Jonah Jameson while the Grizzly escapes! However courtesy of the Jackal, the rematch is coming next issue! First appearance of the Grizzly. Cameo appearances by Betty Brant, Liz Allan, and Joe Robertson.
Artists Information