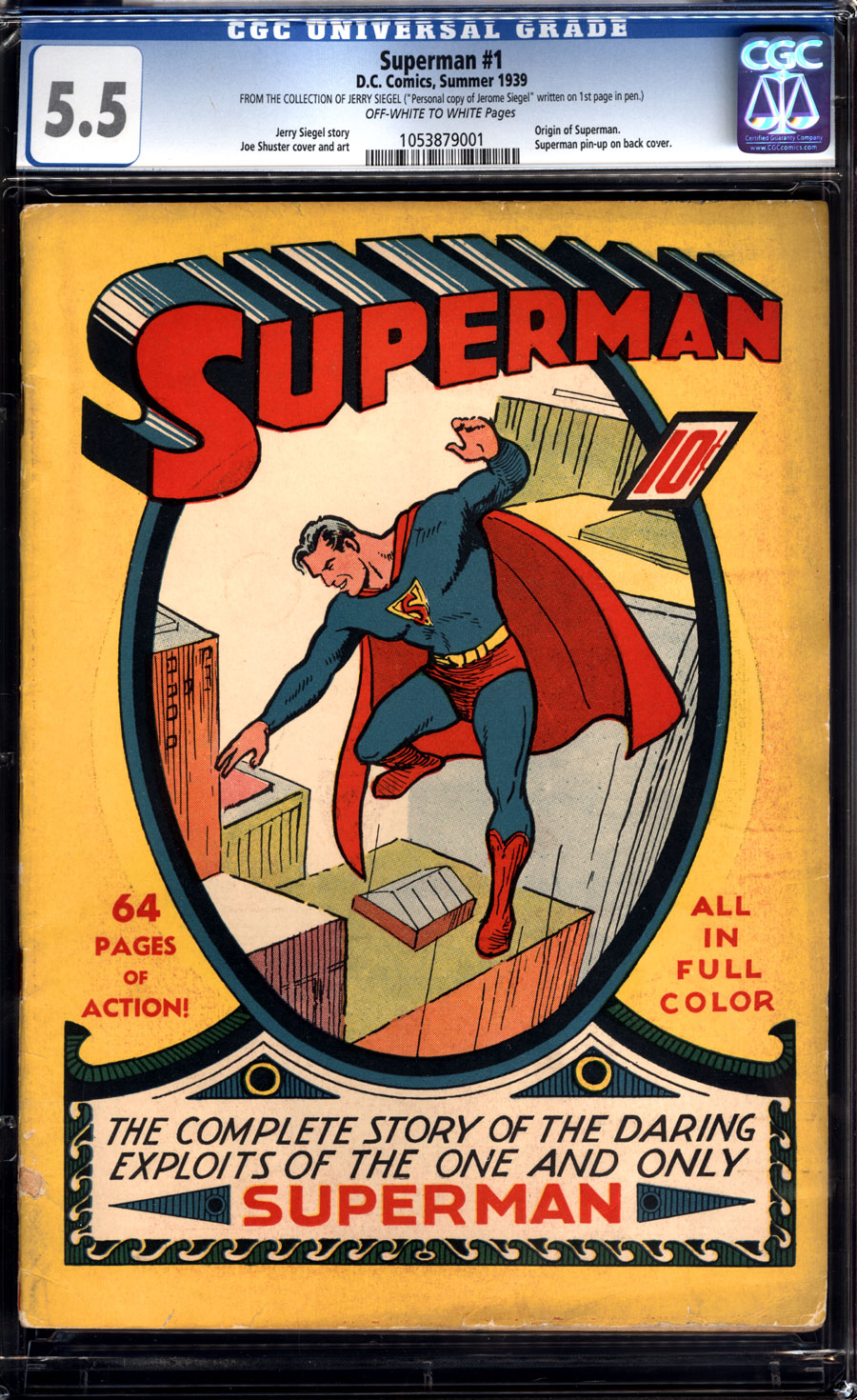 Watch
ow/white pgs UNRESTORED "The Creator of Superman's Superman #1" (please read bidding requirements in listing description)
Joe Shuster cvr/art; origin story, pin-up bc; Comic Book Impact rating of 10 (CBI)
Jerry Siegel CollectionThe first name in superheroes has always been Superman. "Look, up in the sky, it's a bird, it's a plane, it's...Superman!" Those words identified the character for decades and the big red "S" on his chest is one of the most-easily-recognized symbols in the world. Created by Jerry Siegel and Joe Shuster, Superman has enjoyed decades of popularity and has been featured in cartoons, serials, movies, television shows, and pretty much anything else you can put a price tag on. As one of the top Golden Age keys, this issue features Superman's origin story, a must-read for Man of Steel zealots. Often overlooked is the historical importance of this book, which showcases three of the most important supporting characters in the Superman pantheon: Ma and Pa Kent, as well as Lois Lane.
The Creator of Superman's Superman #1!

Originally from the collection of Jerry Siegel, here is a beautiful, unrestored copy of Superman #1 that never saw a 1939 newsstand! This unique Superman #1 is the one and only personal copy owned by Superman writer/creator Jerry Siegel. It went directly from the printer to Jerry's Cleveland home in 1939 before other copies of the book hit the newsstands.
The day he got it, Jerry (who was known as Jerome in his family) wrote "Personal Copy of Jerome Siegel" at the top of the first page so that there would be no mistaking who it belonged to. It remained in his possession until he passed away in January 1996 at the age of 82.
Superman was the hottest selling character in comics from his first appearance in Action Comics #1 in 1938. Although Superman was clearly the star of Action Comics, other comic characters appeared in that publication, but fans demanded a book that contained ONLY Superman. A few months later, the first all Superman comic appeared, containing 64 full color pages of action-packed stories and features written by Siegel including the Scientific Explanation of SUPERMAN's Amazing Strength - - !
Opportunities to own a book of this magnitude are few and very far between. Collectors go wild for pedigree books that at the end of the day do not carry with them much historical significance. Could there be such a thing as a "super-pedigree"? If so, this book is it.
Graded by CGC at a very respectable 5.5 FN- with ow/white pages. We have had the opportunity to appreciate and evaluate this book before it was graded by CGC. It is tight, bright and has the feel, heft and weight of a high-grade, fresh off the newsstand copy. A small chip out near the bottom of the spine keeps it out of a much higher grade category.

We realize many of you would like to bid on this auction lot, so for this listing, ComicConnect.com offers a 3 month, interest free, time payment plan with a 20% non-refundable deposit paid by check, money order or wire transfer.