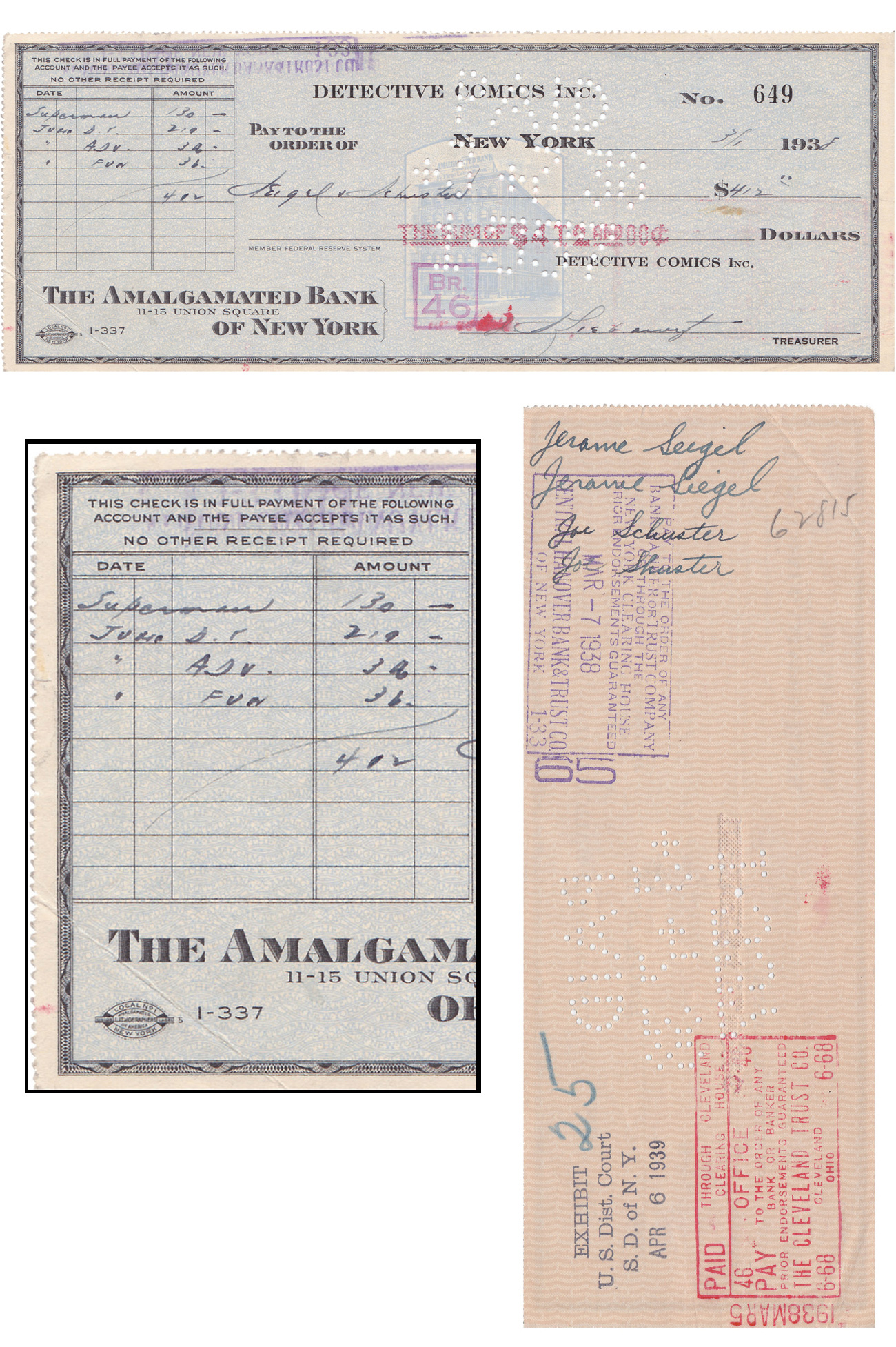 $161,001
Sold For
33
Bids
This auction has ended.
PUBLISHER: DC
COMMENTS: The historic March 1, 1938 Detective Comics Inc. check for $412 payable to "Seigel & Shuster" with $130 line item for the ownership and rights to the character, Superman. (please read bidding requirements in listing description)
Read Description ▼
Sell One Of These Inquire About This

Watch
The historic March 1, 1938 Detective Comics Inc. check for $412 payable to "Seigel & Shuster" with $130 line item for the ownership and rights to the character, Superman. (please read bidding requirements in listing description)

On May 24, 1626, Peter Minuet bought an island for $24 worth of goods. That island later became known as Manhattan.


On December 19, 1919, the New York Yankees bought a baseball player from the cash-strapped Boston Red Sox. That player was Babe Ruth.


On March 1, 1938, DC Comics gave two young men from Cleveland $130 for the rights to a comic character named Superman. That $130 check essentially created a billion dollar industry and set in motion nearly 70 years of legal battles that continue to this day. Without this check being written out by DC Comics, there would be no Superman, and thereby no Batman, Wonder Woman, Spider-Man, X-Men, and all the characters that came into existence after the concept of "the superhero" was born with Superman.


Much has been made of the original 1938 $130 payment to Jerome Siegel and Joe Shuster. Did DC Comics take advantage of two eager young men looking for their big break in the comic business, or was this an unequivocally fair business practice between comic book writers and publishers in 1938 America? Whatever you believe, the $130 check is the quintessential symbol of the debate.


But whatever happened to the check? The consensus has always been that it had been simply lost to time, thrown out by some DC employee without a second thought. Or so we thought ...


In the early 1970 ns, Jerry Siegel & Joe Shuster once again found themselves embroiled in an unsuccessful legal battle with D.C. Comics for the rights to Superman. The decision of the court, once again in D.C. s favor, was rendered in August 1973, and at the time was felt by all parties to be the last word on what was then a 35 year old dispute. (Unknown to anyone in 1973, Congress would soon pass the 1976 Copyright Act that allowed creators to take back certain copyrighted works under certain conditions, which would in turn launch the next 35-year high-stakes battle that is still not fully settled!)


So it was no wonder that one afternoon in the autumn of 1973, a group representing the triumphant legal team and the D.C. Comics executives had a "final" celebratory lunch meeting at the Metropolitan Club in New York City. Celebratory because, after all, D.C. Comics had prevailed not just in the latest litigation but in all of the prior disputes, dating as far back as the very first D.C. lawsuit in 1939 against Victor Fox and Wonderman. When the lunch meeting ended, a box of old court documents that had accumulated over the years was handed over to one of the D.C team. When the box was delivered back to the D.C. executive office, the employee was told, "Just throw it all out. We don't need any of it anymore!"


In addition to the piles of court papers and corporate records, the "Original Check" written to Siegel and Shuster for Action Comics #1 was discarded in the trash. Knowing that the check would have historical relevance, the D.C. employee salvaged it. For the next 38 years it was kept safe in a dresser drawer... until now.


This March 1, 1938 Detective Comics check, signed by Jack Liebowitz, is made payable to Jerome Seigel and Joe Schuster. (You would think that DC would have spelled Siegel and Shuster's name correctly for a character as important as Superman!) The check, in the amount of $412, includes an account of items being paid for. At the very top is "Superman $130." Next is the payment for the June, 1938 Detective Comics at $210. Following that are payments of $36 each for Adventure Comics and More Fun. DC Comics also used this check as evidence in their 1939 lawsuit against Victor Fox, with the evidence stamp from the case clearly visible on the reverse of the check, along with Siegel's and Shuster's actual endorsement signatures.


The final clincher is that the check exactly matches the signed agreement between DC and Siegel and Shuster, which transfers to DC exclusive right to the use of Superman in consideration of $130.  The date of this agreement is March 1, 1938: the same date as the check.


In the comic collecting world, we often fixate on a character's or an artist's first issue, or on a book's condition. This item is completely different, a truly unique pop-culture artifact. The value must be considered in the same breath as the most valuable contracts, checks and signatures known to exist in the collecting world.


Included with this auction lot is a third party letter of authenticity to verify the check, signatures and provenance.

ComicConnect.com's COO Vincent Zurzolo met with Stan Lee at a comic convention about the check and tells the story of his meet with The Man!


"He was blown away and instantly recognized how important it is. I mentioned to him that without that check being written he and I would not be standing at the convention that day. Stan wittily replied 'You're right! I'd be doing something respectable' to which I laughed.
Afterward he asked 'What's it currently at in the auction?', at the time it was $36,000. He then leaned back to me and said 'If that check sells for less than $100,000 it would be a steal!' I asked Stan if I could quote him and, ever the promoter, he said "I'd be disappointed if you didn't!"


We realize many of you would like to bid on this auction lot, so for this listing, ComicConnect.com offers a 6 month, interest free, time payment plan with a 20% non-refundable deposit paid by check, money order or wire transfer.

If you are a new customer planning to make a first-time purchase over $25,000, please contact us at 212.895.3999 or support@comicconnect.com so that we may approve your account for bidding. (This policy was instituted to protect consignors and bidders against bids from fraudulent accounts, and to ensure the integrity of the bidding process).