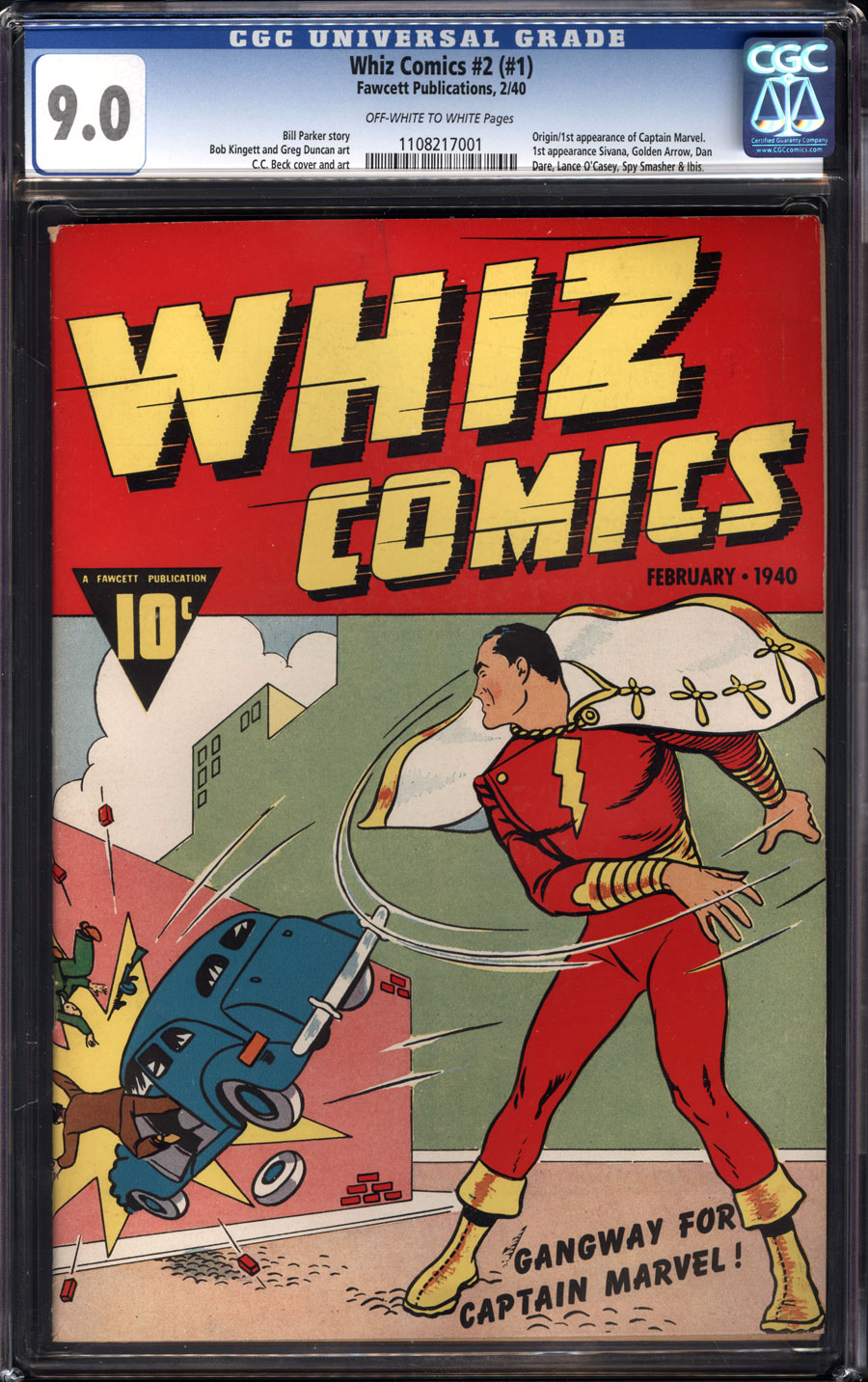 Watch
ow/white pgs, 1 of 1! Library of Congress Copyright copy
#2 (#1); C.C. Beck cvr/art; origin & 1st app. Captain Marvel; Comic Book Impact rating of 10 (CBI)
Highest GradedIt's hard to imagine now, but for about a decade, Superman's most fearsome nemesis was not Lex Luthor or the Toyman, but the Big Red Cheese, Captain Marvel. His colossal popularity and mammoth sales eclipsed even the Man of Steel's as he moved as many as five million copies per issue. DC gathered an army of lawyers to pummel Fawcett and eventually drove them out of the funny book business as court costs skyrocketed just when sales began to lag. It's no surprise that DC would raise an eyebrow at the Captain when you see the Action #1 inspired cover of this first appearance.

It's in the pages within, however, that C.C. Beck and Billy Parker put their immortal spin on the new superhero mythology, as young orphan, Billy Batson, imbued the story with an unexpected poignancy. The moody, mysterious origin tale, with unfathomable caves, ancient gods, and atmospheric visuals set this series apart from all others of the day. Rich and detailed, instantly appealing, and perfectly tailored to its troubled times, Fawcett's family of Marvels remains a literary triumph and a comics cornerstone.This recently discovered Golden Age gem is part of a collection of books unearthed from the Library of Congress. This copy is the highest graded first appearance of Captain Marvel in the form of a CGC graded 9.0 VF/NM Whiz Comics 2 (#1) with ow/white pages from February 1940 (the reason for the 2 is due to continuity with the ash-can version featuring Captain Thunder). Created by Bill Parker and drawn by C.C. Beck, Captain Marvel was an instant hit with adults and children; his sales even surpassed Superman during the Golden Age. This drew the wrath of DC who sued Fawcett as they believed Captain Marvel too similar to Superman and wanted to put Fawcett out of business. Legal issues aside Captain Marvel and Whiz continued to sell well for years. This issue also premieres Dr. Thaddeus Sivana, Spy Smasher, Ibis the Invincible and many more. A truly monumental book, difficult to find in unrestored condition and one of the top Golden Age comics to collect and invest in.

But that is just part of the picture. This is the very copy that Fawcett Publications sent to the U.S. Copyright office at the Library of Congress in Washington, D.C. to secure the historic contents published in Whiz Comics 2. While the original copyright registration card has been lost to the ages, the faint outline of the paperclip that originally held it in place can be seen at the top of the front cover. Truly Historic.

If you are a new customer planning to make a first-time purchase over $25,000, please contact us at 212.895.3999 or support@comicconnect.com so that we may approve your account for placing offers. (This policy was instituted to protect consignors and bidders against bids from fraudulent accounts, and to ensure the integrity of the bidding process).