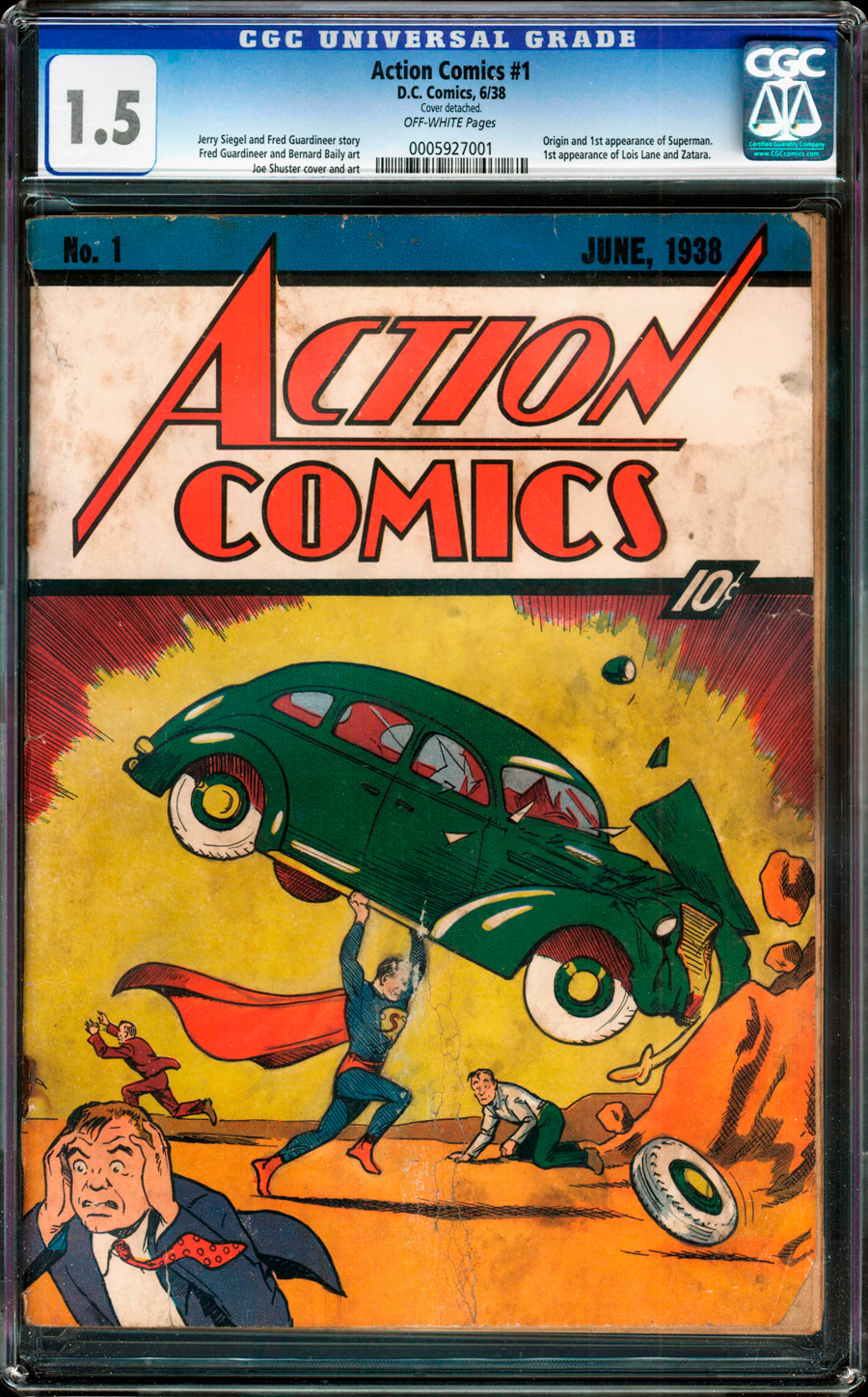 $177,000
Sold For
47
Bids
This auction has ended.
PUBLISHER: DC
COMMENTS: off white pgs; cover detached
origin & 1st app. of Superman by Siegel and Shuster
Read Description ▼
Sell One Of These Inquire About This

Watch
off white pgs; cover detached
origin & 1st app. of Superman by Siegel and ShusterThe most important comic book in history, Action #1 stands as the introduction of the archetype of all other heroes to come as Superman transcends comics and pop culture as an icon of truth, justice, and the American way!

Probably the most unusual copy of this comic we've ever offered, this 1938 holy grail of Superman comic books was found hidden in the wall of an abandoned home.

The owner, a humble and hardworking contractor, named Gonzales, has spent years tearing down old walls and putting up new ones for his home-renovation clients. He's made a habit of leaving a quarter or dollar bill behind them, thinking that sometime in the future, someone will find his treasure and wonder who put it there. But the "hidden treasure" in the walls of the first home he'd ever purchased and renovated on his own yielded the most unusual find he could have imagined. When renovation began on the house, which was built in 1938, he and his crew started finding old newspapers from the 1930s used as insulation in the walls. But he also found a comic book, which stood out to him, because it had Superman on the cover. Curious, Gonzales looked up the comic book online-and discovered it was Action Comics 1-Superman's first appearance.

Now free from its confines after more than seventy years, this copy, though showing the effects of its long service as insulation, boasts bright, sparkling colors and sturdy off-white pages. ComicConnect has become the undisputed industry leader in selling copies of this seminal issue, including holding sales records for the most expensive copies ever sold. With ComicConnect's worldwide reputation and monumental client base at its disposal, the sky's the limit for this attractive copy, which will appeal to collectors looking for an affordable example in attractive condition. This hidden treasure's provenance will only intensify interest in this fantastic book and the auction as a whole.

As for the house that Superman "built?" Our hero plans to finish the rehab, but swears he will never sell it.