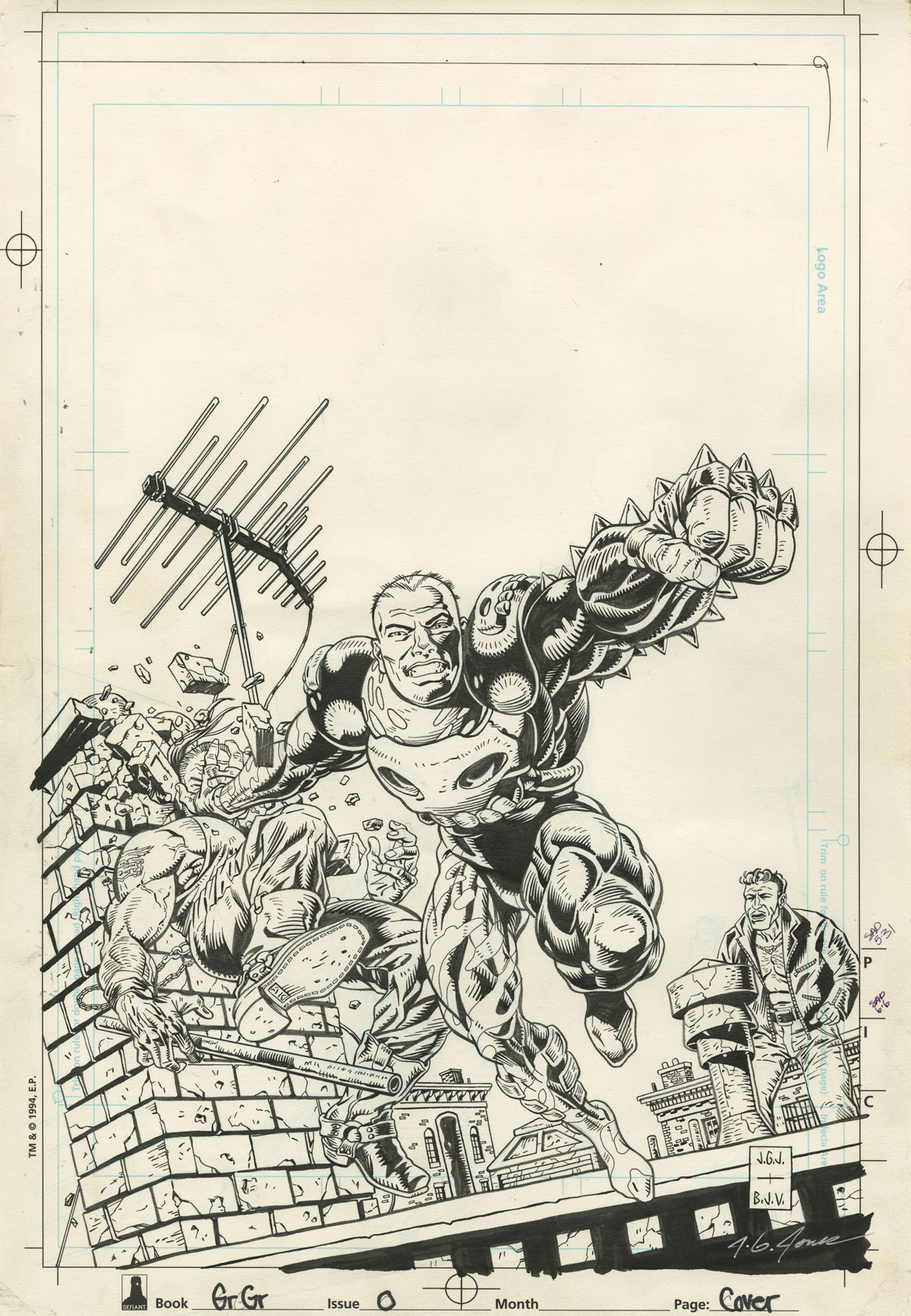 $261.90
Sold For
15
Bids
This auction has ended.
PUBLISHER: Defiant
COMMENTS: 11" x 17" with pencils by J.G. Jones and inks by Jose Delbo
Read Description ▼
Sell One Of These Inquire About This

Watch
11" x 17" with pencils by J.G. Jones and inks by Jose DelboIn 1993, Jim Shooter launched the comic book company DEFIANT, taking a new direction with the science-infused, imaginative storytelling he had demonstrated in The Korvac Saga  in the pages of The Avengers at Marvel, in Star Brand in Marvel s New Universe, and in Alpha and Omega  in Solar, Man of the Atom at VALIANT.

Jones was clearly a stand-out.

Following his work at DEFIANT, Jones again teamed with Shooter for Fatale at Broadway, and then in short succession worked with writers Tony Bedard, Chris Golden and Tom Sniegoski on several Shi projects at Crusade, with Brian Augustin on Painkiller Jane/Darkchylde at Event, and Black Widow and Marvel Boy at Marvel before landing graphic novel Wonder Woman: The Hiketeia at DC Comics. His most recent work on comic book interiors came on DC s recent Before Watchmen: Comedian mini-series with Brian Azzarello.

In 2003, he and writer Mark Millar launched the six-issue mini-series Wanted at Top Cow Productions. It was made into the 2008 movie of the same name staring Angelina Jolie.

Once his career took off, Jones became known as an excellent cover artist. With the notable characteristics of energy, vitality, power and great composition, his covers are known for catching  and holding  the eyes of comic buyers.

Among other achievements, he provided the covers for all 52 issues of DC s weekly limited series 52, as well as a series of landmark covers for Brian K. Vaughn's Y: The Last Man #1-17 at DC s Vertigo imprint. While the majority of his cover output has been for DC, he has also illustrated covers for Black Bull, BOOM! Studios, CPM Manga, Crusade, Dark Horse Comics, Dynamite, Marvel, Image Comics, Speakeasy, and Wildstorm Productions.

His cover for Grimmax #0 holds a distinction like none of the others, though. According to Jones, it may have been the first time he was ever commissioned to provide a cover for comic for he did not illustrate the interior.

Grimmax #0 (billed on the cover logo as The Great Grimmax #1) was an original, eight-page comic by Defiant issued in the polybag of Hero Illustrated #15. With a story by Ed Polgardy (now a film producer) and Shooter, a script by Shooter, pencils by former Legion of Superheroes and X-Men artist Dave Cockrum, inks Jose Delbo, colors by Su McTeigue and edits by Debbie Fix, it was designed to kick off a series featuring the character.

Jones had illustrated the company s Dark Dominion #7-9, following Steve Ditko on #0, editor Joe James on #1-3 and #5, Charlie Adlard (The Walking Dead) on #4, and Louis Small, Jr. (Vampirella) on #6, but this was his first time out of the gate as a cover artist.

J. G. Jones was amazing from the get-go. He started at outstanding. It was easy to see he was going to develop into one of the great ones, and he has,  Jim Shooter told Scoop.
"This cover rocks. The power and dynamism in the foreground figures is startling. It's a milestone. It has great significance with regard to J.G.'s brilliant and rising career. It brings to mind those unforgettable, early-career covers by Frank Miller and Bill Sienkiewicz."

I was an absolute neophyte at this point, still trying to learn how to make comics. Jim, JayJay, and Joe spent a lot of time with me, teaching me storytelling and all of the nuances of working in comics. I had no idea what I was doing, but I was game to try anything,  Jones said.

I was very disappointed that DEFIANT closed its doors before the big Schism crossover storyline came out. It was to cross all of the storylines in all of the DEFIANT books into one big narrative, and I had already drawn much of the first giant, oversized issue, which never saw print. I think that my art was finally improving, at that point, and I was implementing the lessons that Jim and the crew had been trying to hammer into my peanut sized brain,  he said. It was all so new to me then; I had no idea what I was doing. I'm glad that I had amazing guides to teach me the craft of comics.

We were crazy about J.G. back then. He quickly became like one of the family. We not only thought he was talented, we felt he had the kind of all around creator potential that he would have already achieved if not for being held back,  said JayJay Jackson. J.G. is a perfect storm of talent and ideas.

ABOUT GRIMMAX
The cover and title subject The Great Grimmax  was the greatest player of Splatterball, the favorite sporting distraction on the Org of Plasm, the organic, alien world at the center of DEFIANT s Warriors of Plasm series, which had been created by Shooter and developed by Shooter and Lapham.

In the sense that everything was recycled, Plasm was very eco-friendly. But the culture placed little or no value on individuality or individual life, so conditions were frequently harsh and almost as often deadly. On this world, there was some personal fame accorded to the greatest of all the Splatterball players, Grimmax.

Like any sport, Splatterball needed a star player and the revolution needed an inspirational icon. The Great Grimmax is not Spartacus, who was one of the oppressed, nor is he Jonathan E, who loved his sport and unintentionally became an icon of individuality because of his prowess,  Shooter said.

I wanted a man who arrived at his reverence for life by thinking things through. His accomplishments on the field made him realize he was unique, and therefore, were not others? In several scenes, he expresses respect and admiration for opponents,  he said. Eventually, he arrives at the radical, heretical conviction that he doesn't want to kill them. Or anything else. How did I come up with him? I just thought things through. And David Lapham provided a visualization that's, well, killer,  Shooter said.

Grimmax #0 depicted the incredible Splatterball player with a newfound respect for life transported to Earth, where he attempts to fit in and live his life by his newly adopted principles.

The original cover art for Grimmax #0 has been held privately by one collector since approximately 1996, when it was purchased from the artist.