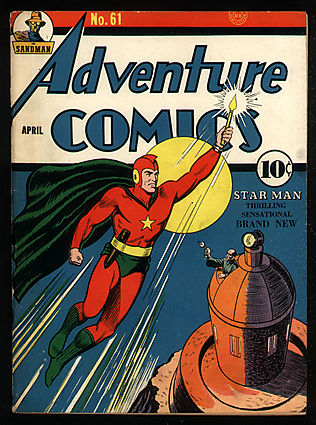 DESCRIPTION
Share This:
trimmed, top edge
Burnley cvr/art; 1st app. StarmanAstronomer and engineer Ted Knight invented the "gravity rod" (and later the "cosmic rod") which allowed him to fly and manipulate energy - becoming Starman. This book marks Starman's introduction and first appearance. A mainstay in the DC Universe, Starman later became a member of the Justice Society of America. Ted Knight was the start of a line of Starman characters, including Stargirl and Star-Spangled Kid. Starman, in one form or another, has been a constant in the DC Universe, holding his own title more than once and teaming with other staples in the DC Universe regularly. This key DC comic marks the beginning of the Adventure Comics Starman storyline, which ran through issue #102.