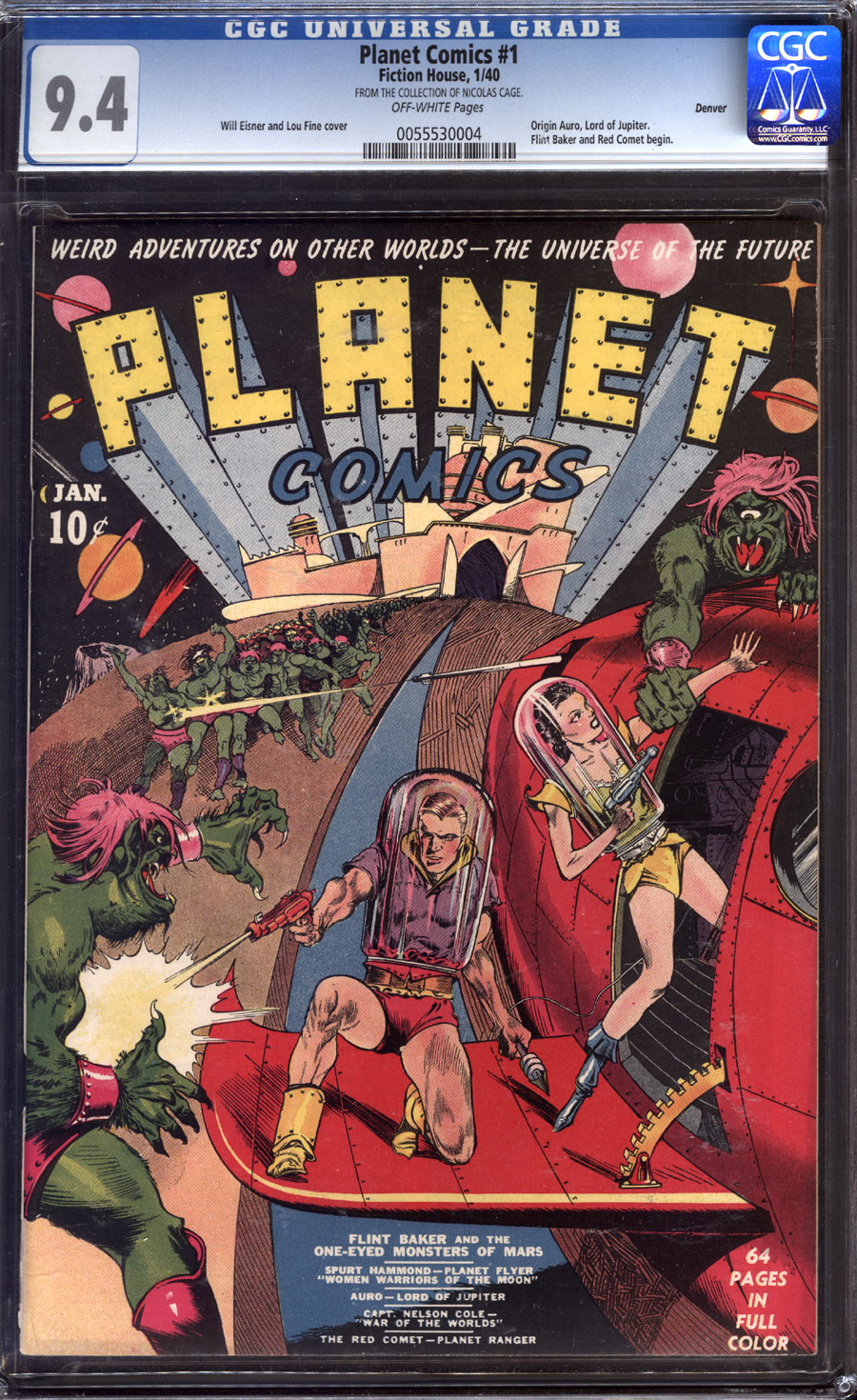 Auction Starts In
$1
Starting Bid
--
Bids
NEXT MIN. BID: $1
FYI there's no need to include decimal points(.).
Bid Confirmation
You are about to submit a bid of . If you win this auction, you are legally obligated to purchase the book. Are you sure you want to continue?
Don't Show Again (except when higher than min. bid)
(No Reserve)
PUBLISHER: Fiction House
COMMENTS: off white pages; QES certified - criteria met: exceptional spine + perfect staple area + perfect cover edges From the Collection of Nicolas Cage
Eisner/Fine cvr; Kiefer art; origin of Auro, Lord of Jupiter, Flint Baker and Red Comet begin
Denver Copy
Highest Graded
Read Description ▼
Sell One Of These Inquire About This

Watch
off white pages; QES certified - criteria met: exceptional spine + perfect staple area + perfect cover edges From the Collection of Nicolas Cage
Eisner/Fine cvr; Kiefer art; origin of Auro, Lord of Jupiter, Flint Baker and Red Comet begin
Denver Copy
Highest GradedThe first comic book devoted exclusively to science fiction, the scrappy genre that grew from the sweaty fever dreams of Victorian fantasists and exploded in the pages of the pulps, to eventually become the major American pop genre, and the modern mythology that continues to captivate the attention of the world. Planet was the four-color inheritor of publisher Fiction House's sci-fi pulps, boasting spectacular covers, soaring storytelling, barrel-chested heroes, and the eye-popping art of most of the period's major illustrative talents. Soaked in mystery, drama, high science, and a generous dose of cheesecake, these majestic works brought the grand scale and brash spirit of sci-fi to a new readership of young and impressionable minds, many of whom, inspired, went on to create their own worlds in galaxies far, far away, and in final frontiers around the universe. It's impossible to stress how important this series was to sci-fi history and a glance at these remarkable covers will seem like a Rosetta Stone for modern science-fiction enthusiasts.

Planet Comics #1 was released as a companion book to Fiction House's Planet Stories pulp novels. The comic features art by legends Will Eisner and Lou Fine as well as Murphy Anderson (under the pen name Leonardo Vinci). The book also features the origin of Auro, Lord of Jupiter and appearances by Flint Baker, Spurt Hammond, and The Red Comet. A 9.4 NM CGC graded Planet Comics #1 ties for the highest graded CGC copy. Over 80 years old now, it is an astounding feat to find this comic at all, let alone in such pristine condition. Coming from the collection of superstar Nicolas Cage, with off-white pages, QES Certification, and a Denver Copy pedigree, this book is truly stunning. The central figures look exceptional, the monsters terrifying, and the landscape amazing. This is a historic gem, and marks a major turning point for pulps, comics, and science-fiction as a whole.