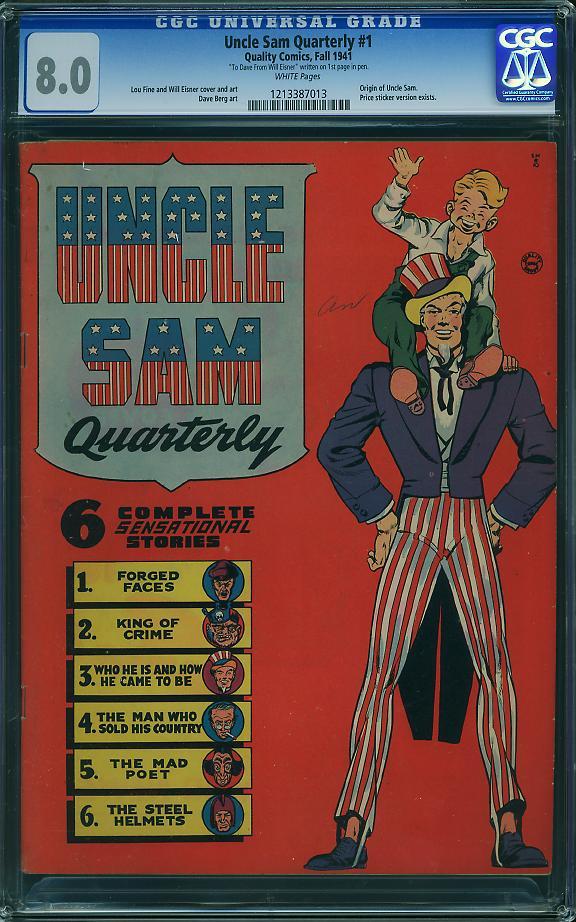 --
Accepting Offers
--
Offers
FYI there's no need to include decimal points(.).
Offer Confirmation
You are about to submit an offer of . If accepted, you are legally obligated to purchase the book. Are you sure you want to continue?
FYI there's no need to include decimal points(.).
Buy Confirmation
You are about to buy this item for , and will be legally obligated under the terms of our User Agreement to pay for it in a timely fashion. Continue?
PUBLISHER: Quality
COMMENTS: CGC #1213387013, White pages, Fall/1941 - Origin & 1st appearance of Uncle Sam, Lou Fine and Will Eisner cover.
Lou Fine/Will Eisner cvr! origin of Uncle Sam (Fall 1941)
Read Description ▼
Sell One Of These Inquire About This

Watch
CGC #1213387013, White pages, Fall/1941 - Origin & 1st appearance of Uncle Sam, Lou Fine and Will Eisner cover.
Lou Fine/Will Eisner cvr! origin of Uncle Sam (Fall 1941)Although Uncle Sam first appeared in National Comics #1 this is his 1st appearance in his own title! Legendary creators including Lou Fine, Will Eisner and Jack Cole's work can be found in this premier issue. Uncle Sam was an interesting character in the annals of comicdom, one of the few based on existing Americana in the tradition of Paul Bunyan or Johnny Appleseed, and although undergoing several iterations through to the Modern Age, Sam always took his visual cues from the iconic J.M. Flagg recruitment poster, which was a self-portrait.
Artists Information