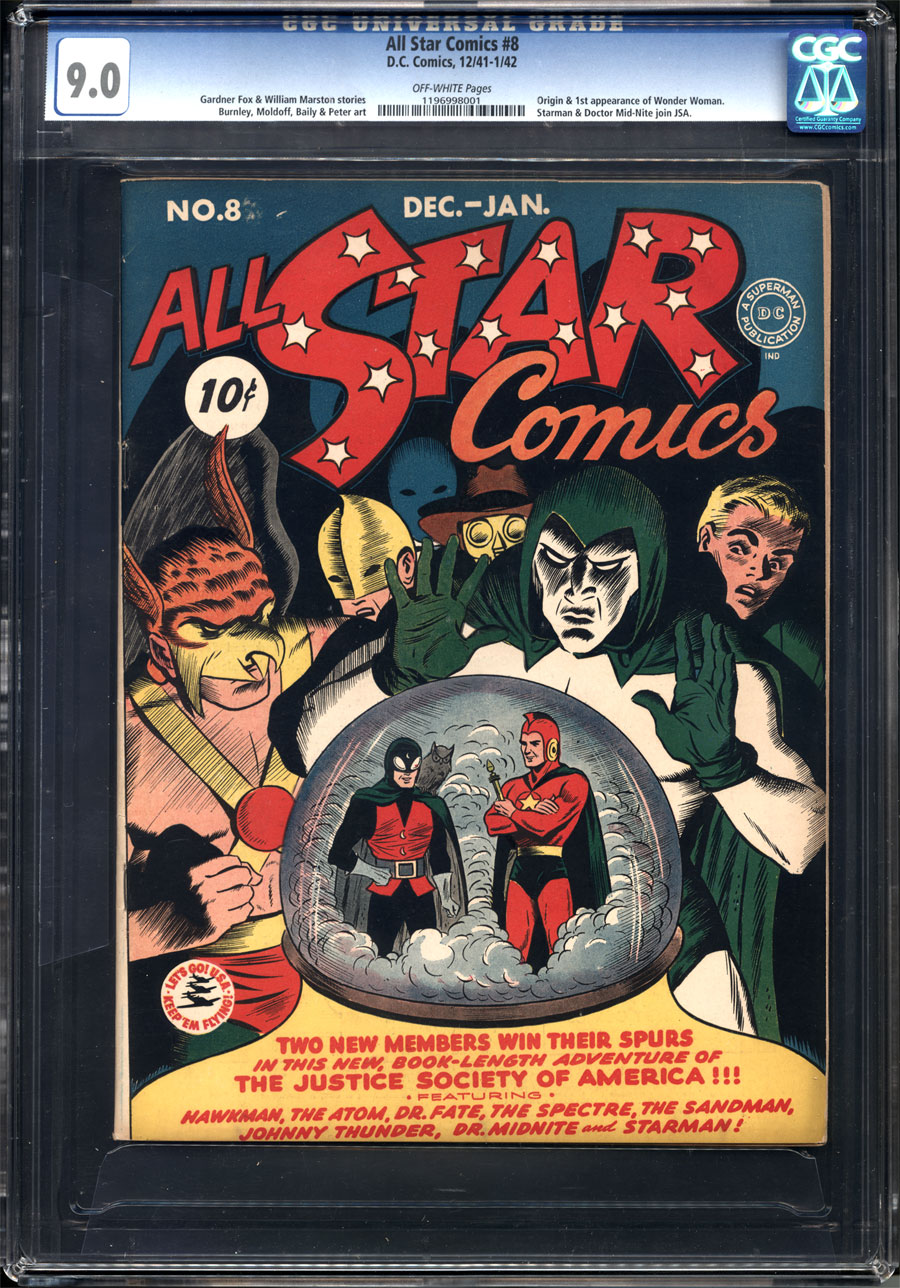 $411,001
Sold For
108
Bids
This auction has ended.
PUBLISHER: DC
COMMENTS: off white pgs
origin and 1st app. Wonder Woman; one of the scarcest major Golden Age keys!
Highest Graded
Read Description ▼
Sell One Of These Inquire About This

Watch
off white pgs
origin and 1st app. Wonder Woman; one of the scarcest major Golden Age keys!
Highest GradedDC's Big Three were blessed with auspicious beginnings. All Star Comics #8 did for Wonder Woman what Action #1 and Detective #27 did for Superman and Batman. America's Guardian Angel was an instant hit who served as a graphic representation of the women's war effort during WWII, predating Rosie the Riveter by two years. The daughter of Hippolyta rescued fighter pilot Steve Trevor, whose pursuit of a Nazi spy ended with his crash landing on Paradise Island. Men were forbidden on the island, but in divining his past, Hippolyta recognized that he was a hero worthy of sacrifice. The Amazons decided to aid the war effort to defeat the vile Nazis with the lovely Diana ultimately chosen for the assignment. The upside potential of this issue cannot be stressed enough. Wonder Woman's overdue solo film received critical acclamation and birthed a whole new generation of fans and feminists alike, "Wonder Woman 3" is slated for a 2023 release.

Click here to view the interior page of the first appearance!
This isn't merely one of the most historically significant comics ever printed, it's also one of the two highest-graded copies on the planet!

Tied merely with 1 other copy, both containing off-white pages. The only other All Star 8 9.0 is locked deep in a private collection, the buyer has no intent to ever sell. This is one of the scarcest of major Golden Age keys, the upside potential of this issue cannot be stressed enough. With Wonder Woman making her latest film appearance in Batman v Superman: Dawn of Justice, due for release this March, and her own film slotted for June 2017, she's poised to inspire a whole new generation of warrior princesses.