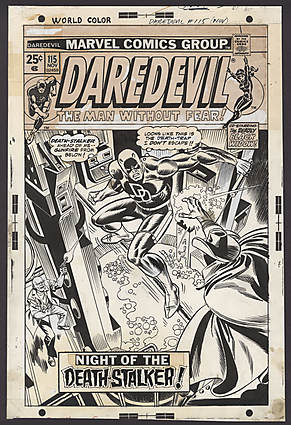 DESCRIPTION
Share This:
Gil Kane pencils, Frank Giacoia inks; image size 10" x 15.5"Coming from the great tradition of young immigrant artists that helped build the nascent comic book industry, Gil Kane cut his teeth at Archie publisher MLJ before working at DC on his epic run of Silver Age Green Lantern and Atom titles and then moving over to Marvel, where he would serve in a journeyman capacity for many years, working on a variety of classic titles. This thrilling Daredevil Kane cover is a quality example of 70s Marvel adventure which really places you at the center of the action through the use of perspective and dramatic framing, enhanced by Frank Giacoia s powerful inks. This cover shows Hornhead precariously balanced over a vat of caustic liquid while being hemmed in by the fearsome Death-Stalker, who makes his debut in this very book, only to be killed off by Frank Miller when he took over the title in issue 158. A few other notable facts about Daredevil 115: the issue features cameos by Man-Thing and Gladiator as well as an ad for Hulk 181, which provided readers with a sneak preview of Wolverine a week before his debut. Simply stated this is a prime example of a SA Marvel cover, iconic and collectible under any circumstances. In years to come the price on this excellent piece of comic art will seem like a steal.

Other than some yellowing and a few stains, art is in excellent condition.