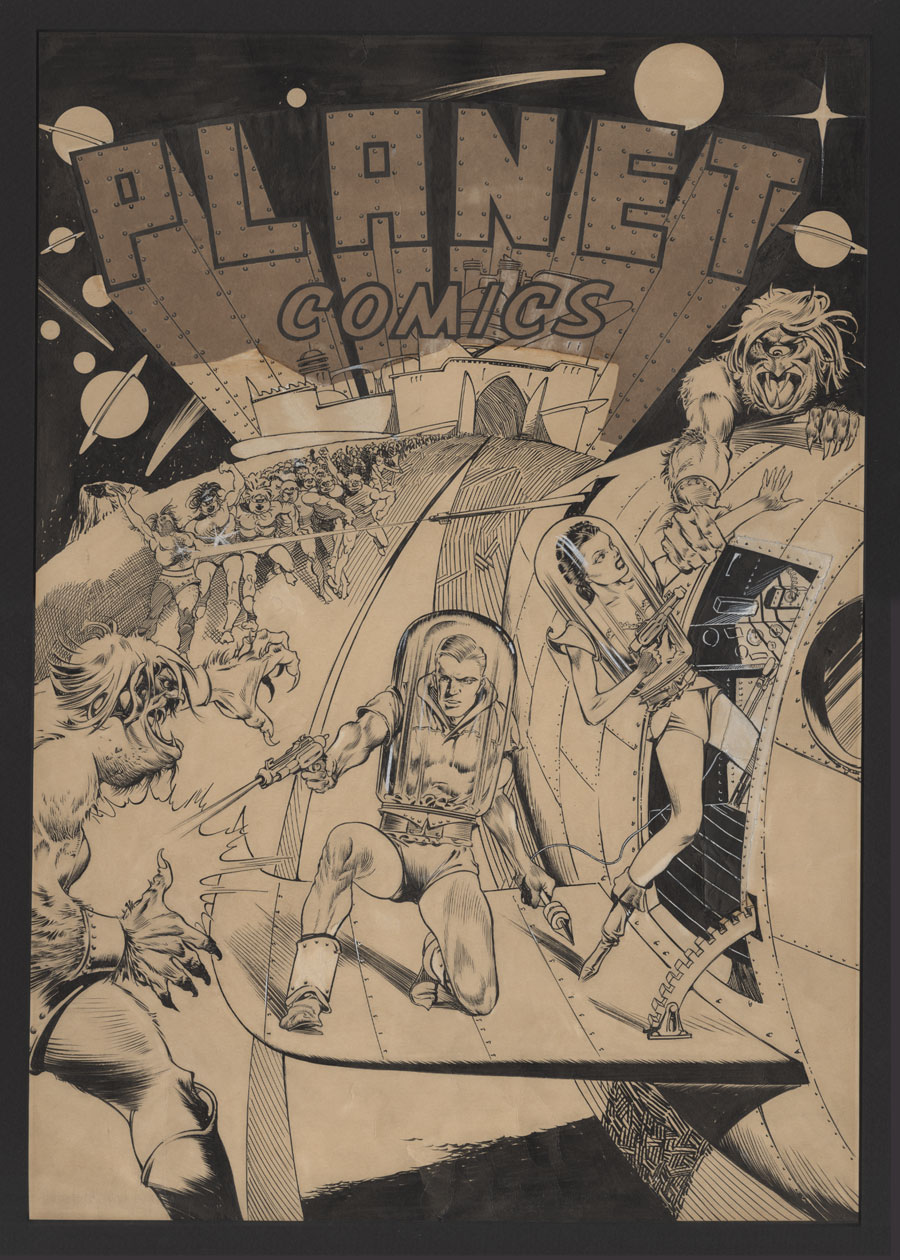 $117,555
Sold For
57
Bids
This auction has ended.
PUBLISHER: Fiction House
COMMENTS: Lou Fine pencils and inks; 1940; matted 18.5" x 25"
Jon Berk Collection
Read Description ▼
Sell One Of These Inquire About This

Watch
Lou Fine pencils and inks; 1940; matted 18.5" x 25"
Jon Berk Collection "Every now and then you find the unexpected, find the 'I did not know that existed', find that item that, for one's collecting interests, is the 'end of the trail'. Rarely do those converge. But for me at the end of one San Diego ComicCon that is exactly what happened."

"Engaging in idle chatter with one high end art dealer, while mooning over some the terrific golden age covers he had, he remarked 'You know, on Tuesday, I'm picking up the cover for Planet 1.' The statement slowly registered. I did not know it even existed. As some may know, I am a Lou Fine groupie, a true 'Fine-atic'. "

"I was dumbfounded, awestruck, and reduced to incoherent babbling for a bit. 'Is it for sale?' The answer was a qualified yes. The owner of the piece wanted to extract some of my Mile Highs and cash. While the parting of some quality Mile Highs was painful, I realized that they were just comicbooks, and in return I was obtaining a piece of history. This was original art by the great Lou Fine, specifically one of the first products of the Eisner-Iger shop for Fiction House, a classic cover of the classic science fiction comicbook series, created a mere eighteen months after the advent of Superman."

"When I finally got the piece, I looked into its provenance, fascinated by its story. Over time, it emerged that one of the first in-house editors for Fiction House, Gene Fawcette, came into possession of the cover along with a couple of others where they remained for many years. Fawcette stated, and Will Eisner confirmed, that while Eisner did a separate layout for the cover, the finished art is one hundred percent Fine. Fawcette lived in a small town in Connecticut, and stored his art in a barn where he had a small studio. Finally, he sold it to a local comicbook collector in his local town, who after a couple of years worked out a deal with a soon to be well-known comicbook retailer. Since the mid-1980s, I am the (lucky, fortunate) third owner of the piece."

"I have been the custodian of this treasure for many years, and am now honored to pass it along to the next lucky owner, who will surely treasure it as I have."

PS -- Jon contacted us shortly after this was written to point out that the seller contacted him several days after buying the piece, offering $10,000 not to go through with the deal. Needless to say...