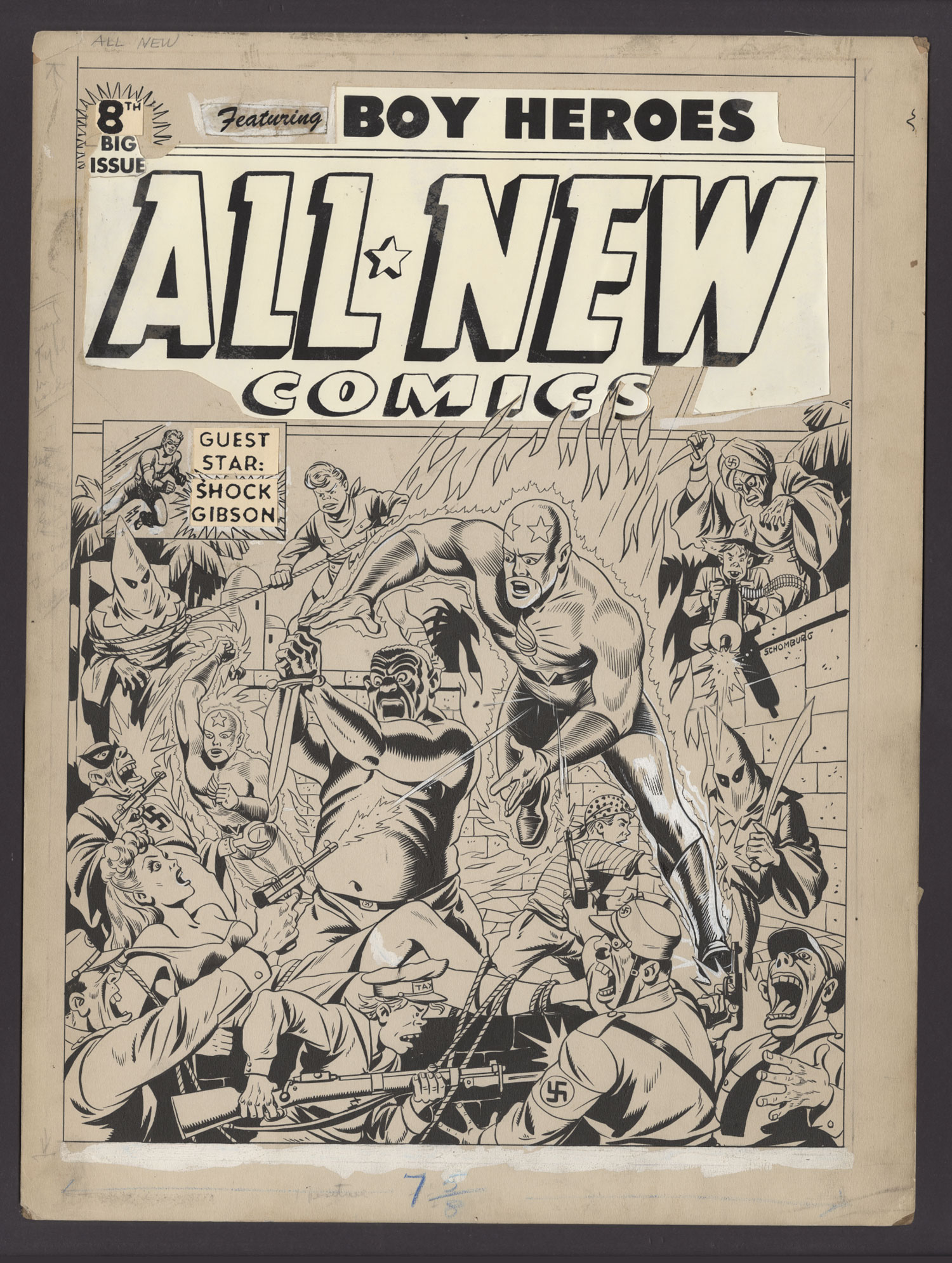 "The last issue of CBM spotlighted the run of Suspense Comics, and particularly the third issue with the classic Schomburg cover. Other than the postage size reproduction in the Gerber Photo-Journal and occasionally viewing the book from afar at infrequently attended comicbook conventions, I had never had an opportunity to view the third issue with any degree of care until it was reproduced in the color gallery of CBM 30. After looking at it a bit, it seemed oddly familiar, as if I had seen it in some other form.

"I pulled out a copy of All-New Comics 8. There it was. Another Schomburg cover. As viewed, there was a bound blond threatened by an upturned sword. Both issues have the woman surrounded by monstrous Nazis, some hooded in Klu Klux Klan fashion. Both impending executions are set in a tropical locale surrounded by raised walls or land with desperate rescues in sight. In one, a Nazi shoots a revolver from the lower right to the upper left while in the other the shot starts from the lower left and goes to the upper right. Instead of the spear set to be flung from up above in Suspense 3, there is a machine gun firing down into the scene of impending mayhem. Of course, the All-New cover prominently features the Red Blazer and the Boy Heroes, the title's resident heroes. However, the overall composition and feel of each cover are obviously similar. Mere coincidence?

"Suspense 3 has an April 1944 cover date while All-New 8 has a cover date of May 1944- only one month apart! Logic would dictate that Schomburg had to have created these covers in close temporal proximity to one another. Commencing with issue 6, All-New's prior sporadic output went on an every other month schedule. One could hypothesize that the owner of the title would want to insure a regular schedule by having several issues already prepared. The first Schomburg cover was with the seventh issue. Could Schomburg have created the cover for issue 8 well in advance of its scheduled release? Is it possible that the cover to number 8 was the prototype/inspiration for one of the classic comicbook covers of all time? Is it possible that the cover to issue 8 was created before Suspense 3?

"All-New Comics contained a text feature that was entitled 'The Story Behind the Cover'. The text would then relate a short story. The cover to a particular issue illustrated a dramatic moment from that story. Obviously the text piece and cover in issue 8 involved the comic characters of that title. The story in All-New 8 involved the abduction and planned execution by Nazis of the daughter of the French commander in North Africa. However, these plot elements apply with equal force to the cover of Suspense 3 as demonstrated by the following abbreviated excerpt from All-New 8:

"'Marianna Le Clair was of that startling beauty which made all stop to stare... Yes, she was a famous general's daughter. [As she strolled through a bazaar] ...on a hot sultry day... a dirty rough hand... went across her mouth... a sharp blow struck her temple... and she lost all consciousness. A shrill woman's cry stabbed the sultry air. ...[T]russed by heavy rope, lying limp and helpless was pretty Marianna... Over her hovered devilishly fantastic creatures, garbed in weird costumes. To a side, a fiendish-face Nazi squatted. In the center of the piazza a ...man stood raising a wicked short sword...'

Click here to view the cover of Suspense Comics #3!