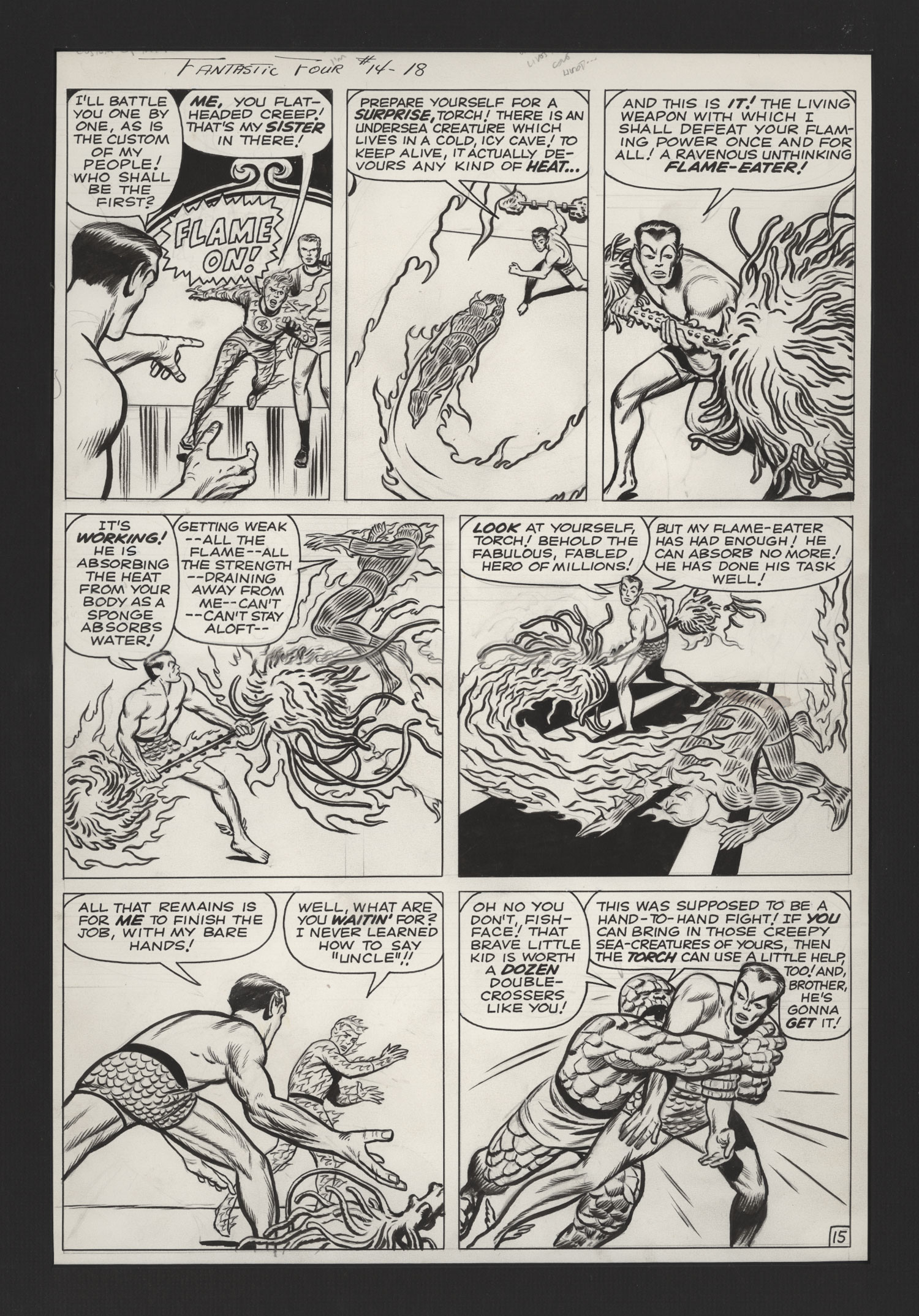 $31,000
Sold For
30
Bids
This auction has ended.
PUBLISHER: Marvel
COMMENTS: Pg. 18; "The Merciless Puppet Master" Jack Kirby pencils, Dick Ayers inks; 1963; 18" x 24.5"
Featuring the Sub-Mariner, the Human Torch and the Thing
Jon Berk Collection
Read Description ▼
Sell One Of These Inquire About This

Watch
Pg. 18; "The Merciless Puppet Master" Jack Kirby pencils, Dick Ayers inks; 1963; 18" x 24.5"
Featuring the Sub-Mariner, the Human Torch and the Thing
Jon Berk CollectionThe action in these classic Jack Kirby Fantastic Four panels portrays Namor squaring off against the Human Torch and the Thing; a direct result of the evil machinations of the Puppet Master, who is manipulating the Sub-Mariner to exact revenge on the FF. The thrilling battle is one of the preeminent examples of "King" Kirby in his prime. Two of Marvel's Golden Age powerhouses are showcased alongside the new fan favorite in a hyperkinetic piece that zings. It's pieces like this, this muscular, bruising display of a super-showdown that got the nascent Silver Age boom ba-DOOMING. Observant art lovers can almost witness the progression of Kirby's style on this page, drawing from his past glories depicting motion and power, but also foreshadowing his growing penchant for strange devices and the bizarre sci-fi tropes that would define his future work. ÿý

ÿýIf you are a new customer planning to make a first-time purchase over $25,000, please contact us 24 hours in advance of the item closing at 212.895.3999 or support@comicconnect.com so that we may approve your account for bidding. (This policy was instituted to protect consignors and bidders against bids from fraudulent accounts, and to ensure the integrity of the bidding process.) Once approved, please log out of your account and then log in, for the approval to take effect.ÿý

ÿýWe realize many of you would like to bid on this auction lot, so for this listing, ComicConnect.com offers a 6 month, interest free, time payment plan with a 20% non-refundable deposit. Time Payments invoices can only be paid by cash, check, money order or wire transfer. LEARN MOREÿý