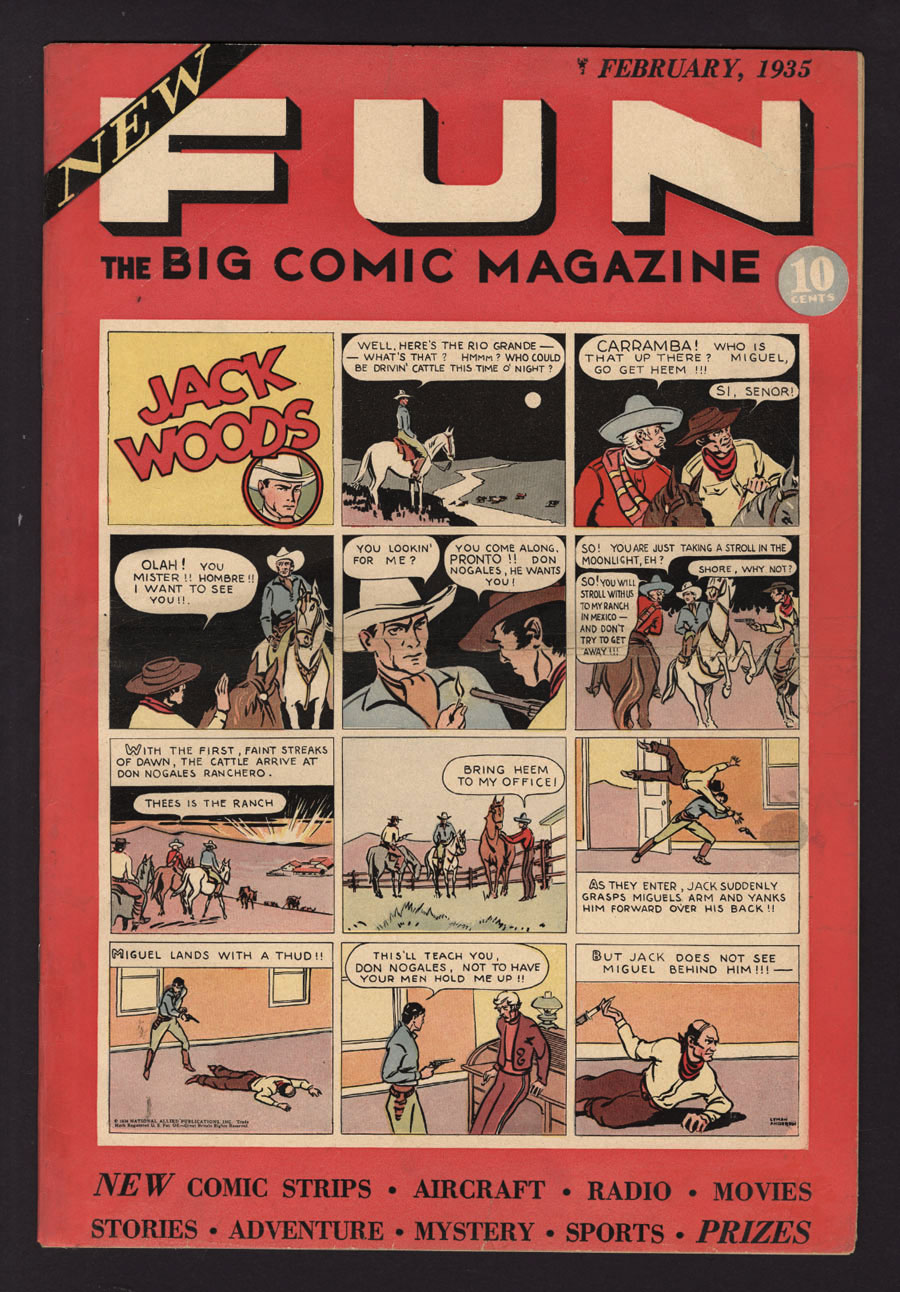 Watch
rice paper support, ct, tr sls, chip replacement
VERY RARE! 1st DC comic
Jon Berk CollectionNew Fun Comics #1 is the first publication released by what would soon become the biggest, and longest-lasting powerhouse in comics, DC Comics. The importance of this book has little to do with its contents, and much to do with its place in history, for it is in these oversized pages that the worldwide pop culture phenomenon known as the comic book got its start. Featuring a variety of original single-page and short stories by a bunch of artists that will not ring any bells with the comic-collecting crowd, even those well-versed in the Golden Age, these humble origins are akin to silent movie shorts or the Gutenberg Bible, or Pong for the video game fans out there. It is the beginning of something big, and, as such, commands attention and respect. "New Fun went beyond their predecessors and presented original adventure strips as well as the traditional funny pages. Although greatness was in store for this title and the company that produced it, New Fun had a shaky start. Published at the initiative of Malcolm Wheeler-Nicholson, a retired major who had previously tried his hand at writing adventure stories for pulp publications, New Fun contained a liberal mix of adventure and humor strips, none, until the third issue, were produced in color (and then only about half were in color, a common occurrence in early comicbooks). Additionally, the first four issues were only thirty-two pages long. Issues five and six expanded to forty pages, however, many of those pages were taken up with text pieces, puzzles, and articles about various topics. Only the first three issues had slick covers, while the remainder were on uncoated paper stock. Nonetheless, although lacking in page count and color, it was clear from the outset that something 'New' was indeed underway."

"The features set the standard for the anthology titles that were soon to abound in the marketplace. Spy thrillers were represented by 'Sandra of the Secret Service' by Bringham, westerns by Lyman Anderson's 'Jack Woods', and science fiction by 'Don Drake on the Planet Saro'. However, it is within the last issue of New Fun that the seed of a character is found that was to change the comicbook business, leading to the lucrative industry it was to become in the 1940s."

"The sixth issue featured 'Dr. Occult the Ghost Detective' by Leger and Reuths -- a pen name for Jerry Siegel and Joe Shuster, a young writer/artist team from Cleveland, Ohio (The pen name was used because Siegel and Shuster had contributed another strip in this sixth issue, and it was common practice to use aliases for individuals who contributed more than one strip per title to make it appear that the bullpen staff was larger than it was). Dr. Occult, in one story arc, incorporated several elements that set the prototype for Superman, and, for this reason, the historical importance and value of New Fun #6 cannot be overstated."