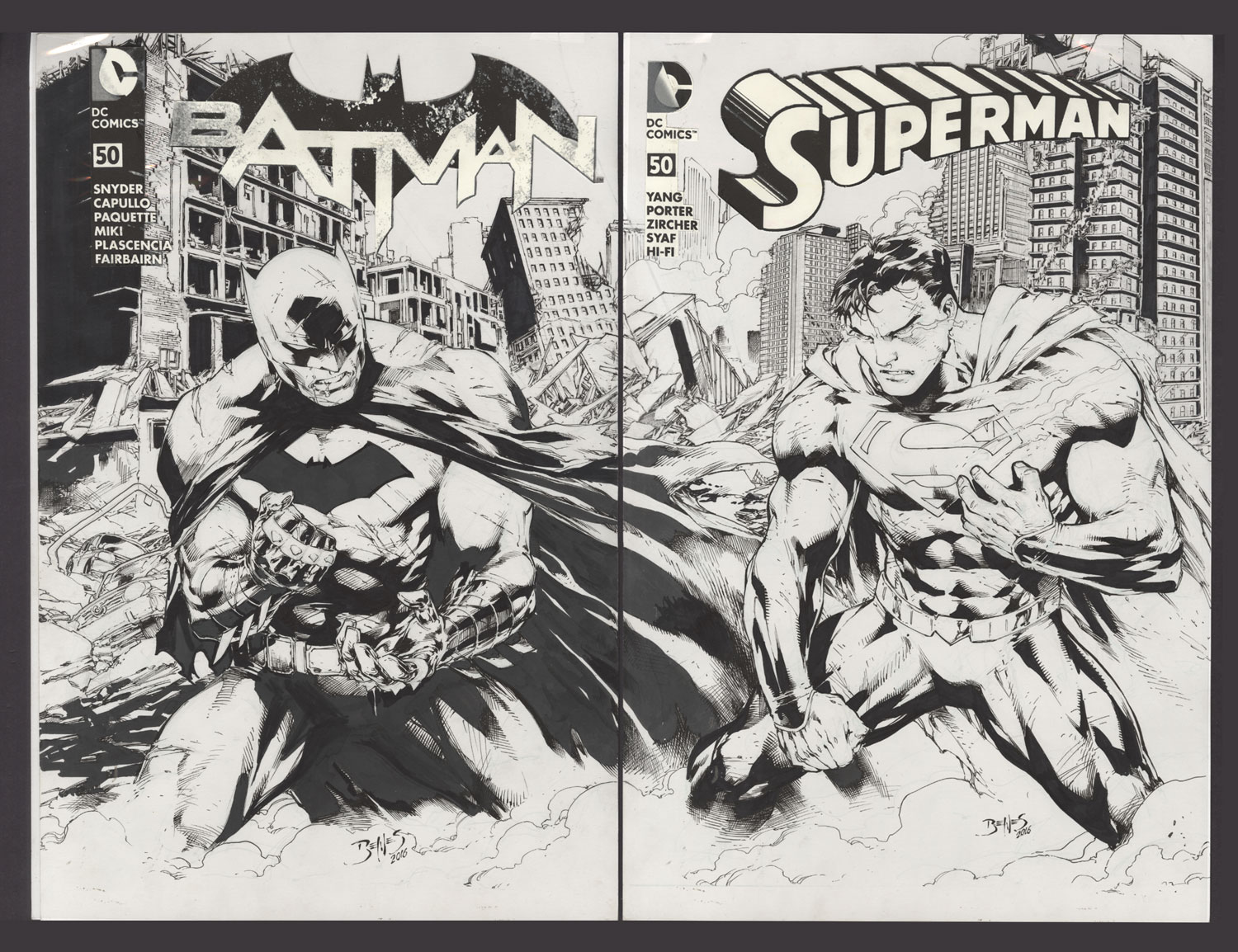 Watch
Batman #50 and Superman #50 Ed Benes Beyond Comics Cover Variants; Ed Benes pencils, inks and signed; 2016; 17.25" x 23"Many scoffed at DC's radical reinvention of their legendary hero roster in their line-wide New 52 initiative, but it was the DC editorial staff that had the last laugh, as their across-the-board reboot not only brought in Marvel fans who were intimidated by the publisher's labyrinthian history of series, some that stretched back as far as WWII, but also older readers who had dropped out entirely, leading to a renaissance that's still going strong. One of the major artistic influences of the new look for DC, a mix of Adams-esque photorealism and Jim Lee-style cinematic grandeur, was Ed Benes, whose covers had already been proven champs on the increasingly crowded comic shop shelves.

Benes' Brazilian roots are apparent in his aggressively hyper-romanticized physical forms and sheer love of the human body. His male heroes are massive, sculpted, and decisive, and his heroines are notoriously supple, confident, and mega-sexualized. His sharp, fussy line work, clearly influenced by the widescreen gonzo look of 90's Image comics, adds an angular, restless atmosphere, giving his covers a startling clarity. This massive split cover, which graced the variant 50th issues of Batman and Superman, is an immediate classic, providing a nearly definitive glimpse of the modern incarnations of the Man of Steel and Dark Knight. Few modern comic book artists command the rabid collector base and top-tier prices of the Silver and Golden Age greats, but Benes is in that rare company. If you're an old-school collector who doesn't get modern comics, this astonishing image will surely change your mind and your outlook. If you're a modern comic art collector, well, you're probably already bidding furiously. An impressive and unforgettable work from one of the 21st century's most commanding illustrators.
Artist Information

José Edilbenes Bezerra (born November 20, 1972 in Alto Santo, Ceará, Brazil), better known by his professional name Ed Benes, is a Brazilian comic book artist, known for his work for DC Comics, on such titles as Birds of Prey, Supergirl, Superman, and Justice League of America.