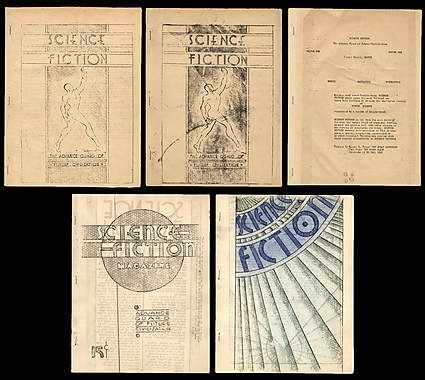 $40,000.00
Highest Offer
2
Offers
OFFER:
Offer Confirmation
You are about to submit an offer of . If accepted, you are legally obligated to purchase the book. Are you sure you want to continue?
BUY:
Buy Confirmation
You are about to buy this item for , and will be legally obligated under the terms of our User Agreement to pay for it in a timely fashion. Continue?
PUBLISHER: Siegel & Shuster
COMMENTS: Issues 1-5; Complete set from the Forry Ackerman collection
(1933-1934) Issue #3 contains the legendary story Reign of the Superman
Hidden Valley Collection
Read Description ▼
Sell One Of These Inquire About This

DESCRIPTION
Share This:
Issues 1-5; Complete set from the Forry Ackerman collection
(1933-1934) Issue #3 contains the legendary story Reign of the Superman
Hidden Valley CollectionWritten by Jerry Siegel and Drawn by Joe Shuster.Comic book history doesn't get much rarer or more important than highlight #4 of the Hidden Valley Collection. The earliest known published work by one of comics' most-important creative teams, this extremely rare complete set of five fanzines hearkens from the pre-convention early days of science fiction fandom. Personally mimeographed by Superman creators Jerry Siegel and Joe Shuster in an extremely small run (less than 50 by some estimates), the third issue boasts the legendary and rarely seen "Reign of the Superman". Originally presented as a world-beating villain, and resembling eventual arch-enemy Lex Luthor more than the Man of Steel, Siegel and Shuster quickly realized the potential of the character as a hero, and soon after reworked the concept into a pitch for newspaper strip editors.

Fanzines were, in the pre-internet era, the easiest way for fans to network, communicate, and share ideas, and Siegel and Shuster were among the earliest and most active in sci-fi fandom. When pulp publishers repeatedly failed to print their submissions, the young duo took to their mimeograph, self-publishing their delirious tales of adventure and mayhem with surprising style and professionalism. This hand-printed set originally comes from the collection of sci-fi legend and literary agent Forrest J. Ackerman, who likely acquired them when they were originally published in 1933. These copies have been in the hands of the Hidden Valley Collection's owner since being auctioned off by Sotheby's over 25 years ago. Not only does this set boast the first-ever "Superman" tale, but also what is believed to be the first printed mention of King Kong in issue #4. Notably, issue #5 informs readers that, although the fanzines will no longer be produced, a very exciting new development was coming soon, and subscribers should "stay tuned." It has been said that statement referred to their finally convincing a publisher to believe in their concept of a superhero with super-powers, which was unfathomable to their efforts prior. Thus, the origins of Superman, the Hero!

The comic publishers of the Golden Age, after repeatedly rejecting Siegel and Shuster, finally bought into the superhero concept, and as a result, ushered in a new world, whose scope and impact would continually expand in importance and influence until the current day, and with the unequaled success of superhero movies and TV series, there seems to be no end in sight, and all because of this humble, mimeographed fanzine, created by two motivated dreamers all those years ago.

While showing signs of wear, and betraying its humble origins of inexpensive paper stock and hand-cranked printing, these issues are in very fine shape for their age and rarity. It's not often that one gets to see American pop-culture history in the making, and this remarkable collection set, one of only two complete sets known to have survived, is among the most-important lots we've ever had the privilege to offer, a once-in-a-lifetime collecting opportunity. Along with the Hidden Valley Collection's Action Comics #1, Superman #1, and Action Comics #1 hand-colored Silver Print, this legendary run of fanzines completes a group of four pillars that form the foundation of this amazing and historical auction, the likes of which will never be seen again!