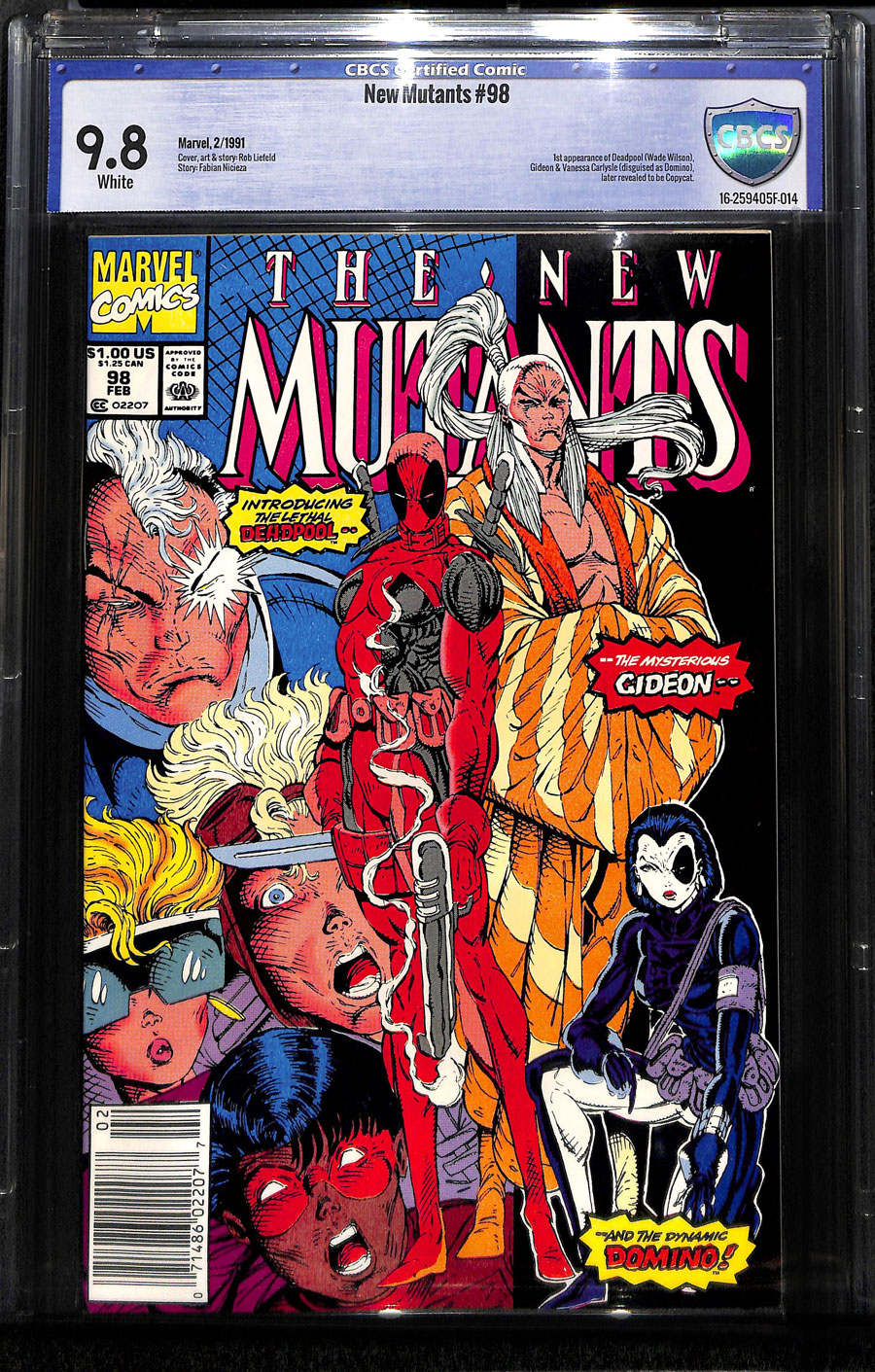 DESCRIPTION
Share This:
white pgs
Liefeld cvr/art; 1st app. Deadpool (Wade Wilson)One commonly asked question when you search New Mutants #98 online is “is it worth the investment?” The short answer is yes, as this book is not only influential to comic book history but gave birth to the highest-grossing R-rated movie in cinema history. New Mutants #98 is a highly sought-after book mostly due to a single character, Deadpool, “the merc with a mouth.” This issue features the first appearance of Deadpool, Domino, and Gideon, with the former being one of the most-popular breakout stars of the Copper Age. Wade Wilson aka Deadpool was created by Rob Liefeld and Fabian Nicieza as a disfigured mercenary with a superhuman healing factor and heightened physical abilities. Liefeld also came up with the design for Deadpool naming Spider-Man and Wolverine as his inspiration, he even gave the new creation a similar Weapon X origin to Wolverine, while writer, Fabian Nicieza, created Deadpool's personality. Nicieza is also credited with giving Deadpool the alter ego Wade Wilson as an inside joke because the character resembles DC's Slade Wilson aka Deathstroke. Deadpool resonated with fans mostly thanks to his insane personality, he often talks to his opponents while fighting employing silly behavior as a distraction, and he is hyper aware that he is a character in a comic book, consistently breaking the fourth wall which has become a running gag in his many appearances. Despite starting life as a supervillain Deadpool was quickly changed into an antihero with a heart of gold, thanks to his popularity among readers. Deadpool has been featured in a number of solo titles and team-ups with Domino and Cable, who are his main partners, he often appears as a wild card in major crossover events, however. As of late he's been more of a central figure. Deadpool is currently at the peak of his popularity after appearing two mega-hit movies starring Ryan Reynolds. One will assuredly see a plethora of cosplayers at any convention dressed up as “the regenerating degenerate” as he even has female spin-offs. Although most franchises Marvel licensed to Fox are being rebooted after the Disney merger, plans to continue the Deadpool series are still underway, so this book is definitely going to continue to drive up in value.