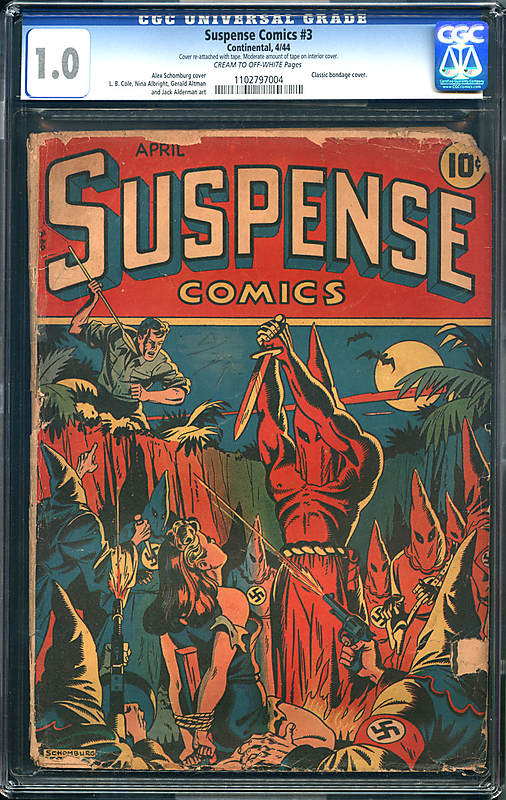 Watch
crm/ow pgs; cvr re-attchd w/tp, mod amt tp on int cvr
classic ultimate bondage cvr by Alex Schomburg; L.B. Cole artOne of the classic images of the Golden Age, this Alex Schomburg cover can be described as a Nazi/Bondage/Horror/War hybrid. It's as striking today as it was in the 1940s and is listed in the Overtsreet Price Guide as one of the Top 100 Golden Age books. Here you have the unforgettable image of a hooded Nazi holding a sword, ready to plunge it into the heaving breast of a captive woman in peril. Meanwhile, spear in hand, her would-be savior stands poised to strike at the dastardly soldiers gathered around a fire, as one of them makes a futile attempt to protect their ill-gotten prize. This book also features interior art by the legendary L.B. Cole.
One of the scarcest of Golden Age books, and one of the most instantly recognizable, we are happy to offer this stalwart example of pre-code weirdness at a grade that makes it attractive to buyers seeking to acquire a classic without raiding their savings, but remaining attractive and appealing enough to allow its striking cover imagery to deliver maximum impact.