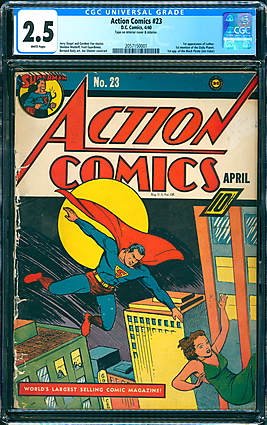 $8,655.00
Last Bid
26
Bids
This auction has ended.
This listing has been remove from the website.
PUBLISHER: DC
COMMENTS: white pgs; tp int cvr and int
Joe Shuster cvr/art; 1st app. of Lex Luthor; 1st mention of Daily Planet
Read Description ▼
Sell One Of These Inquire About This

DESCRIPTION
Share This:
white pgs; tp int cvr and int
Joe Shuster cvr/art; 1st app. of Lex Luthor; 1st mention of Daily PlanetJust as Sherlock had Moriarty, so does Superman have his Alexei "Lex" Luthor, the template for all super-nemeses to follow, and arguably one of the best-known literary creations of the 20th Century in his own right. Initially, a standard evil-genius-with-a-death-ray stereotype developed by Siegel and Shuster for one of the anti-war potboilers for which the series was first known, Luthor quickly gained a style all his own, with a subsequent fan following, and flourished into one of the all-time great comic baddies. This comic is the first appearance of the character and is among the rarest of Golden Age keys.The color quality of this 2.5-graded Action Comics #23 is as brilliant as it is stunning. The clarity of its tone and overall brightness set it apart from Golden Age books of a similar grade and give it splendid curb appeal and aesthetic value for such an accessible, well-loved piece.