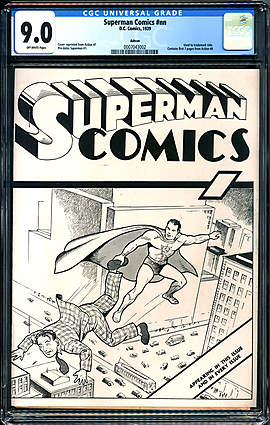 $83,000.00
Last Bid
40
Bids
This auction has ended.
PUBLISHER: DC
COMMENTS: Ashcan; off white pgs; 1 of 1!
Used to copyright the title of a new series; SUPER RARE!
Highest Graded
Read Description ▼
Sell One Of These Inquire About This

DESCRIPTION
Share This:
Ashcan; off white pgs; 1 of 1!
Used to copyright the title of a new series; SUPER RARE!
Highest GradedThe Superman ashcan edition is arguably one of the most important comic books in existence, as it's the first time that the iconic Superman logo ever appeared on the cover of a comic. For 80 years the Superman logo has appeared on not only comic books but on tens of thousands of consumer products from toothpaste to t-shirts. The logo was created by legendary DC Comics designer Ira Schnapp, who devised many, if not most, of the famous logos for DC comic books well into the 1960s.

Ashcans were quickly and cheaply printed "proof" copies compiled by comic publishers to assure copyright for a planned title, only a handful were usually ever printed, with most of them discarded after copyright was attained. This makes these essential missing links of comic history extremely valuable and sought after amongst rarity comics collectors. The cover art on this ashcan is from Action Comics #7 - the rare second cover appearance of Superman. The interior is the complete Superman story from Action Comics #8.

One of only three known copies, this book was acquired in 1986 by the hobby's foremost authority on Golden Age ashcans, Gary Colabuono, directly from Sol Harrison, former president of DC Comics. He then sold this copy in 2001 for $37,000, and it subsequently changed hands in 2007 for $90,000. This is a once-in-a-lifetime opportunity to own an important piece of super-rare comic book history.