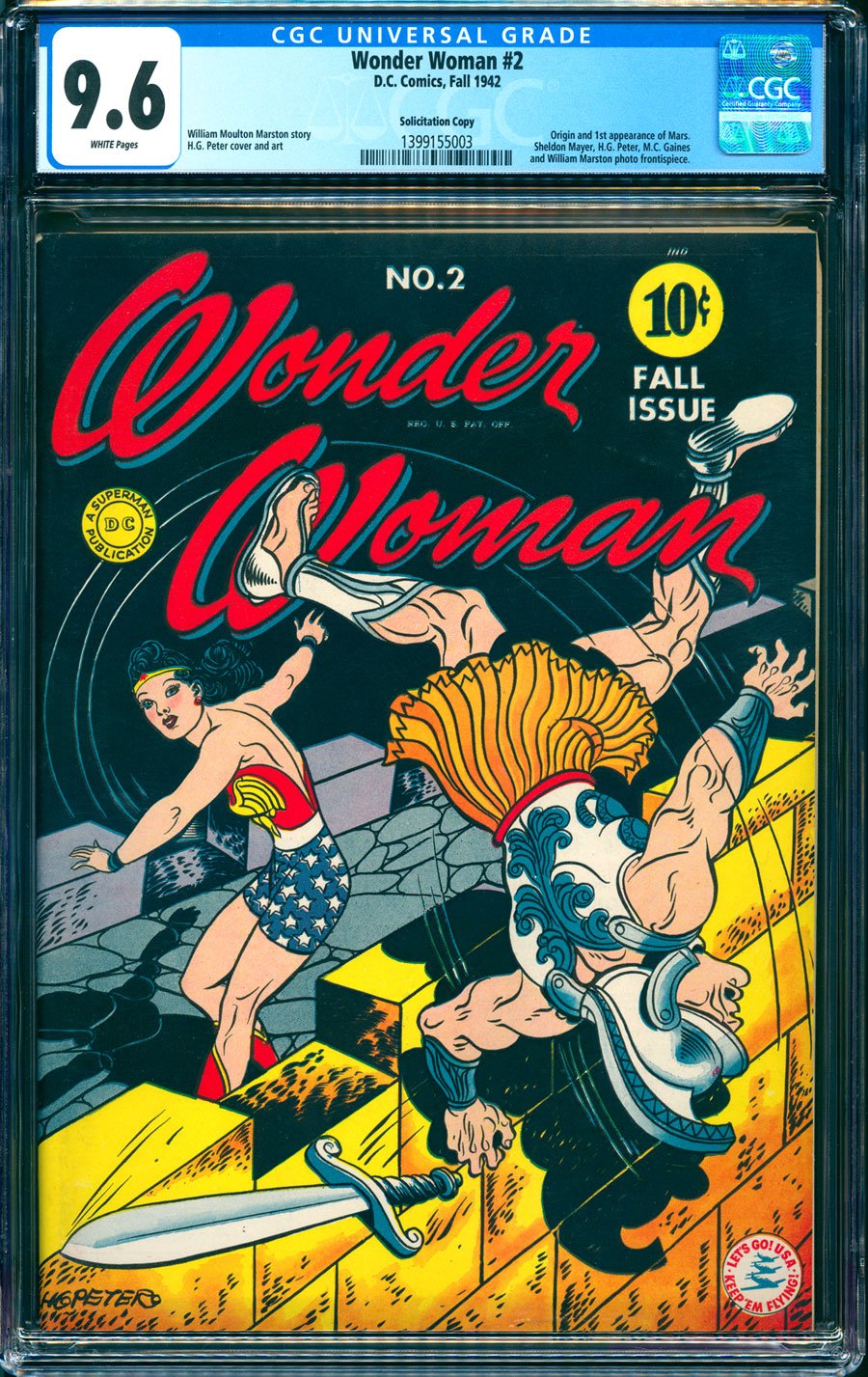 DESCRIPTION
Share This:
white pgs; Solicitation Copy; Alice Marble letter to Harper's Magazine and editorial clipping from the Hartford Courant included (see extended comments)
H.G. Peter cvr/art; origin & 1st app. Mars (Fall 1942)
Highest GradedThe second issue of Wonder Woman is chock full of wartime thrills and mythological chills, not only does the Amazonian princess have to contend with Hitler, Hirohito, and Mussolini on the earthly plane, she also has her hands full with Mars, The Duke Deception, and The Count of Conquest in the realm of the gods. There’s even a subplot involving baseball, and the requisite expected bondage panels. Wrapped in another amazing H.G. Peter cover that depicts the titular heroine tossing a muscular soldier off of a rampart, this classic comic is a popular and affordable option for those who are priced out of the WW #1 marketplace.

When DC were set to launch their first superheroine, they knew they had something special on their hands. Where previous heroes had been beefy, masculine, adolescent power fantasies created by immigrant artists and hungry young cartoonists, this was something altogether different. Wonder Woman was a deliberately feminist-minded, artfully designed creation from a pop psychologist who was passionate about women's issues. To present this new creation in the best possible light, DC took several unprecedented steps, including debuting the character in two anthology titles nearly simultaneously (All Star #8, then Sensation Comics #1) before launching a solo series for the Amazon Princess; and this extraordinary promotional item, of which this is likely the only copy to survive. Presumably sent to editors at all of the major American weekly and monthly magazines, this press packet for the second issue was found in the papers of a former editor of Harper's Magazine. The promotional package shows the extent to which DC was determined to make a splash in the mainstream market with the exciting new creation of William Moulton Marston, Wonder Woman.


This lot presents possibly the first time a major publisher used modern PR tactics to get their new comic character in front of a mass audience.


Note the contents of the letter sent with issue #2 ( "B" image ), showing that DC (then All-American) associate editor Alice Marble was obviously succeeding in her goal of making contact and was continuing to have an impact on editors and publishers at major journals, as evidenced in the clipping from the Hartford Courant. The historical significance by itself makes owning this copy a necessity for the most demanding Wonder Woman collector or historian. Long undervalued, Golden Age Wonder Woman issues are finally getting the respect due by collectors and investors.