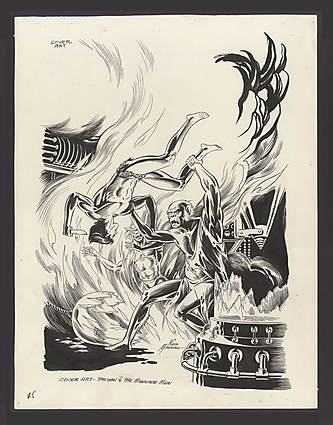 $3,300.00
Last Bid
18
Bids
This auction has ended.
This listing has been remove from the website.
COMMENTS: Russ Manning pencils, inks and signed; image size 12" x 17"; A Monster Man holds Tarzan in the air as he brandishes his knife
Read Description ▼
Sell One Of These Inquire About This

DESCRIPTION
Share This:
Russ Manning pencils, inks and signed; image size 12" x 17"; A Monster Man holds Tarzan in the air as he brandishes his knifeTitled "Tarzan and the Monster Men" this cover illustration by Russ Manning is an impressive stand-alone piece of comic art, the action up front shows the King of the Jungle being thrown around like a rag doll by a misshapen humanoid, while he brandishes his knife in an attempt to defend himself. The background is a mixture of flames and sci-fi contraptions, which completes the pulpy atmosphere on this piece, which is probably unpublished art by Manning. "The Monster Men" is the title of an Edgar Rice Burroughs book, but research has revealed no information on the existence of a comic book version from the period this piece was created, making it an even more desirable collectible.