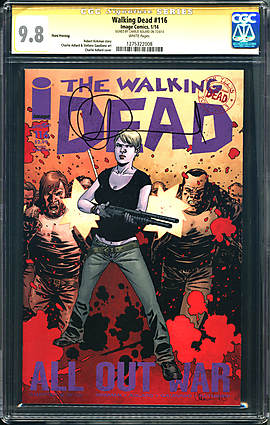 $2,501.00
Last Bid
25
Bids
This auction has ended.
This listing has been remove from the website.
PUBLISHER: Image
COMMENTS: white pgs; Charlie Adlard signature series; Third Printing
Kirkman script
Highest Graded
Read Description ▼
Sell One Of These Inquire About This

DESCRIPTION
Share This:
white pgs; Charlie Adlard signature series; Third Printing
Kirkman script
Highest GradedIn Walking Dead #116 Rick and his fellow survivors lay siege to the Saviors in the Sanctuary, leading a horde of walkers through the gate into Negan's stronghold. Part of the All Out War plot arc, this is one of the most action-packed issues of the storyline, featuring plenty of mayhem and scheming, an issue so popular it was reprinted several times.This copy of Walking Dead #116 is the extremely rare Third Printing, which is rumored to number around twenty-five copies, which were all handed out personally by Charlie Adlard while signing books, who was the first to notice their altered color scheme. This is one of the rarest TWD variants around, and when you add in the Adlard signature and the certified highest grade, you have one really cool and hard to find Walking Dead comic, sure to be a target for the title's fan base.