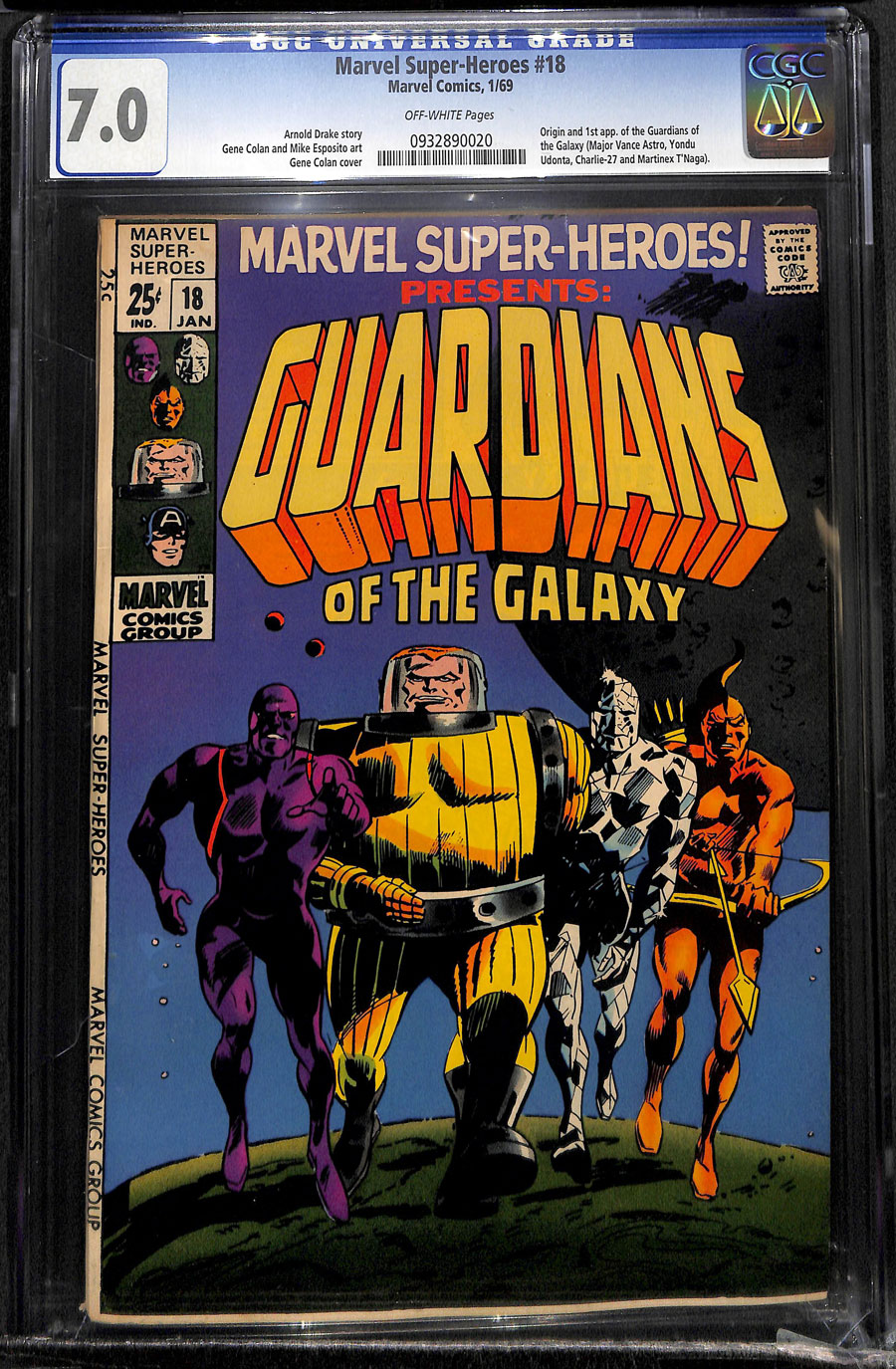 $396
Sold For
13
Bids
This auction has ended.
PUBLISHER: Marvel
COMMENTS: off white pgs
Origin and 1st app. Guardians of the Galaxy (1/69)
Read Description ▼
Sell One Of These Inquire About This

Watch
off white pgs
Origin and 1st app. Guardians of the Galaxy (1/69)Originally conceived by Roy Thomas as a Cold War-themed superteam, his idea was quickly retooled into a sci-fi motif by Stan Lee and writer Arnold Drake. This first appearance in try-out/reprint title Marvel Super-Hero would go on to find itself a key issue decades after its publication thanks to the enormous success of the GOTG movies and guest appearances in the MCU. In this issue the Guardians are assembled by Jupiterian Charlie-27 to fight against the sinister Badoon, who have attacked his home planet, traversing the universe he first enlists Martinex, diamond man of Pluto, and then goes to Earth to add human, Major Vance Astro, and Yondu Udonta to the crew, and lo, the Guardians of the Galaxy are formed. After five years of inactivity the team was brushed off as guest stars in a bunch of disparate titles, from Marvel Presents to Thor to Avengers, Two-In-One, well you get the picture, then the concept would lay dormant again for another decade. Tom DeFalco revived the GOTG again in the late 80s in an attempt to cash in on the popularity of Star Trek: TNG, and finally, the space opera gained traction, becoming a bit of a humorous adjunct to all the dark antihero themes of the 90s. Initially the team’s announced inclusion in the MCU met with some derision, as the title was viewed as minor league compared to some of Marvel’s marquee talent, but the combined charm of Star-Lord, Groot, Drax, Rocket Racoon and Gamora would prove to be box office gold, instantly vaulting the Guardians to the forefront of Marvel’s stable, and the rest, my friends, is history. From small beginnings come great things, and this humble little overlooked comic languished for years in obscurity only to find new life thanks to the great minds at Marvel, converting this book into a key issue, uncovered from the dust of time by the MCU.
Artist Information