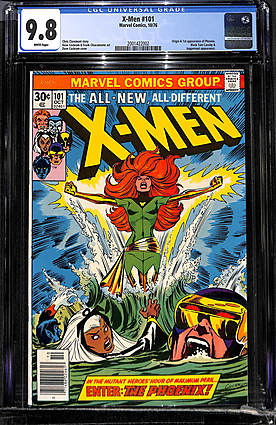 $4,800.00
Last Bid
24
Bids
This auction has ended.
This listing has been remove from the website.
PUBLISHER: Marvel
COMMENTS: white pgs
Cockrum cover; origin & 1st app. of Phoenix (10/76)
Read Description ▼
Sell One Of These Inquire About This

DESCRIPTION
Share This:
white pgs
Cockrum cover; origin & 1st app. of Phoenix (10/76)X-Men #101 sets in motion one of the most celebrated and tragic plotlines in the history of superhero comics, this is the issue where Jean Grey, previously known as Marvel Girl, transforms into the Phoenix. As X-Men fans know, the story of Jean Grey's stuggles to control the massive power she wields as the Phoenix will one day end up up destroying her, as well as crushing the spirits of her teammates and loved ones. The legendary tale is unanimously recognized as one of the best plots in comics history, as a maturing readership opened up to weightier fare in the late 70s and early 80s, a renaissance period in the comic indistry. This first appearance of the iconic character is already a popular investment book, and with an MCU reboot on the horizon, the sky is the limit on this issue.