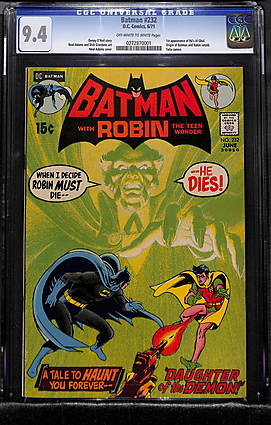 $1,265.00
Last Bid
22
Bids
This auction has ended.
This listing has been remove from the website.
PUBLISHER: DC
COMMENTS: ow/white pgs
1st app. Ra's al Ghul by Neal Adams
Read Description ▼
Sell One Of These Inquire About This

DESCRIPTION
Share This:
ow/white pgs
1st app. Ra's al Ghul by Neal AdamsObviously influenced by the Shadow and the pulp classics of the early 20th Century, Dennis O'Neil and Neal Adams sought to add a mystic, exotic flavor to the Batman rogues gallery, and created an able, immortal opponent for the Dark Knight by combining Arabic mythology, yellow peril tropes, and late-60s psychedelic flavor. Ra's al Ghul (whose name translates into the Demon's Head) was an immediate favorite with readers, becoming the first truly legendary addition to the Batman mythos since the introduction of the Riddler in the late 1940s, and arguably the second-most influential comics villain after the Joker. His megalomaniacal fervor, startling intelligence, and ferocious skill made his repeated clashes with Batman the stuff of legend, and the addition of his exotic and sensual daugher Talia gave an added frisson to the proceedings, leading to one of the most nuanced and consistently compelling dark romances of the modern comic era. This debut appearance survives in suprisingly low numbers, and the remaining copies almost never come to market, as they are hoarded jealously by fervid Bat-fans who refuse to part with this modern classic. Coupled with a classic Adams cover, making it even more appealing to serious Bronze collectors, this issue never fails to sell for multiples of guide in all grades on the rare occasion it creeps into the marketplace. Note that the character is slowly becoming a major player in the hit Arrow TV series, making his early appearances even more sought after.