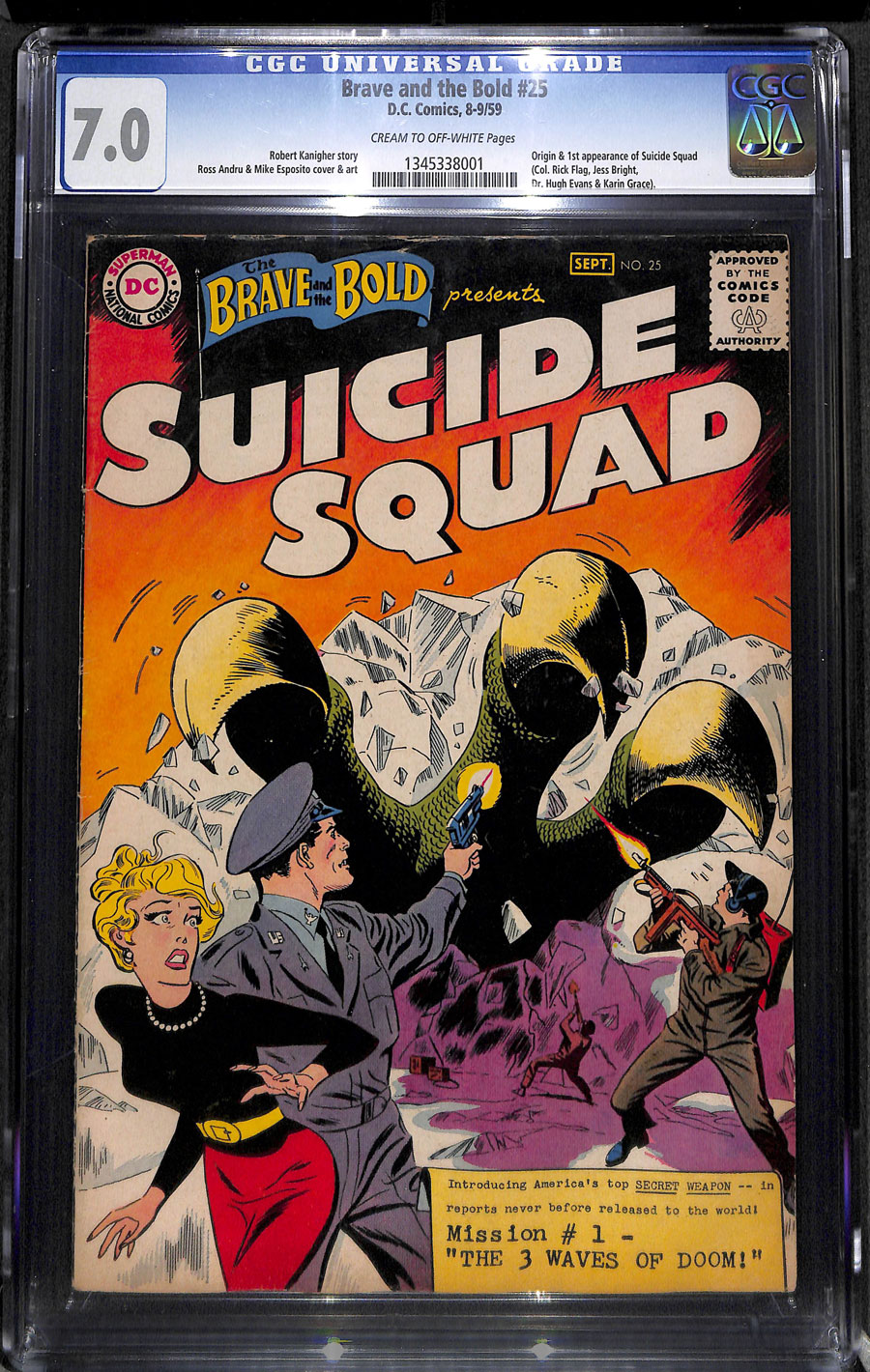 $3,000.00
Highest Offer
2
Offers
Offer Confirmation
You are about to submit an offer of . If accepted, you are legally obligated to purchase the book. Are you sure you want to continue?
Buy Confirmation
You are about to buy this item for , and will be legally obligated under the terms of our User Agreement to pay for it in a timely fashion. Continue?
PUBLISHER: DC
COMMENTS: crm/ow pgs
origin & 1st app. Suicide Squad (9/59)
Read Description ▼
Sell One Of These Inquire About This

Watch
crm/ow pgs
origin & 1st app. Suicide Squad (9/59)Starting out from their humble beginnings in Brave and the Bold #25, the Suicide Squad has undergone myriad iterations throughout DC’s history into the modern era, culminating in a feature film that was a huge box office draw. The original team from the Silver Age was comprised of Rick Flag, Jess Bright, Karin Grace, and Hugh Evans, these characters were relatively standard human beings, with scientific and military training, whose first mission involves a giant red wave that is hurtling across the ocean causing havoc to everything in its wake. It is soon revealed that an enormous, powerful creature was inside the wave and an Atomic Age kaiju style battle ensues, playing right into the popular cultural obsession of the era with sci-fi and monsters. The first Suicide Squad was featured a handful of times in the pages of Brave and Bold, but the concept behind the team would prove to have staying power. Being retooled again and again throughout the following decades, the squad would evolve into a ragtag cohort of villains who were sent on dangerous missions with very little chance of survival. The basic concept is that of the film “The Dirty Dozen,” gather a group of dangerous criminals and send them to their doom, if they manage to survive, reward them with their freedom from captivity. The team would go on to include some of DC’s finest bad guys over the years including Deadshot, The Joker, Poison Ivy, Cheetah, Harley Quinn, and the omnipresent Rick Flag. The Suicide Squad’s big screen debut came in 2016 to financial success and mixed criticism, with a sequel in the offing for 2021, this origin issue is sure to see another rise in value.
Artist Information