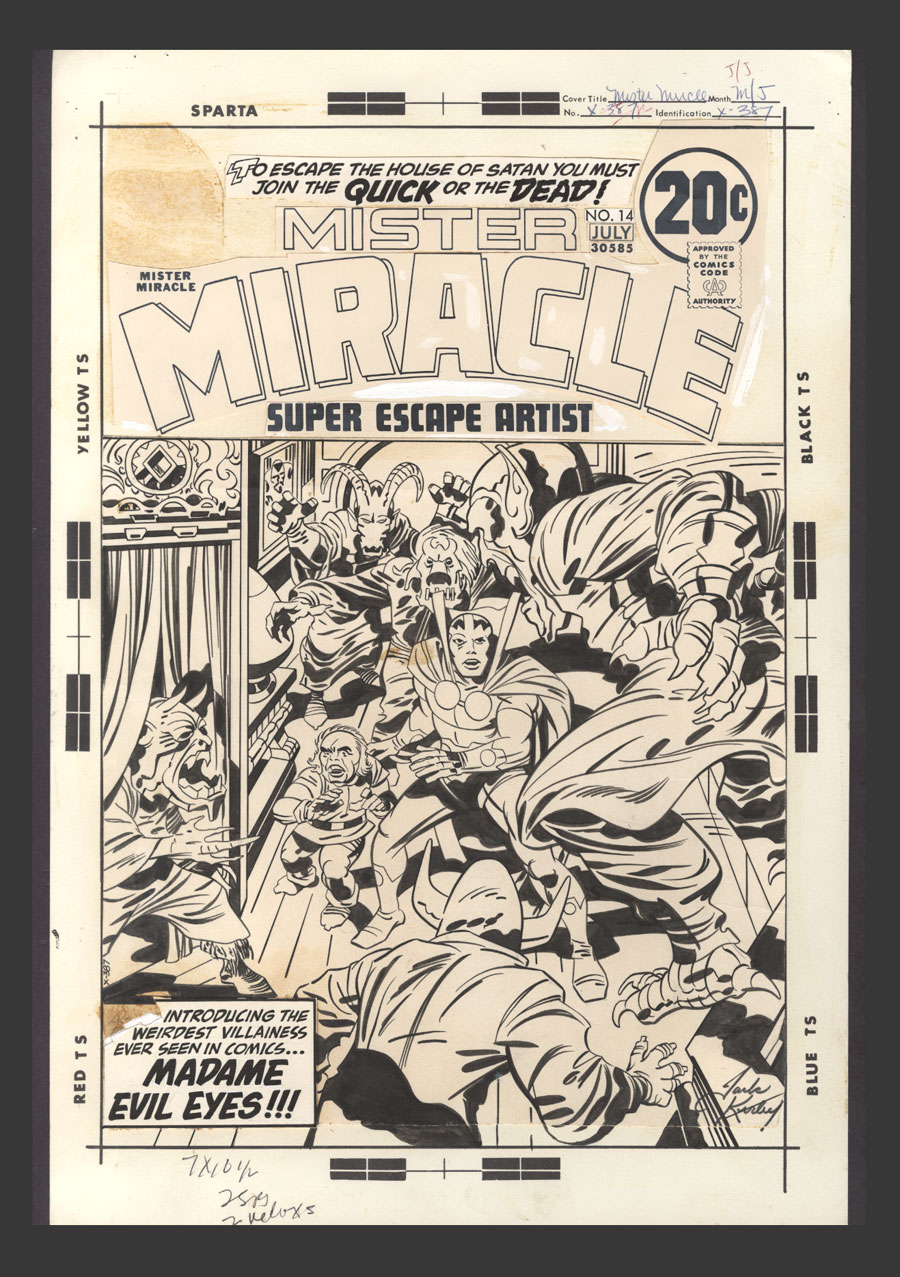 $23,333
Sold For
43
Bids
This auction has ended.
PUBLISHER: DC
COMMENTS: Artist Jack Kirby, signed by Kirby; 10" x 15" image area
Read Description ▼
Sell One Of These Inquire About This

Watch
Artist Jack Kirby, signed by Kirby; 10" x 15" image areaWhen Jack Kirby launched his "Fourth World" metaseries, it was met with resistance by DC's editorial board and mixed reviews by comic readers, but as time has passed Kirby's creation has grown in stature to provide a grandiose cosmic backdrop for the entire DC Universe, eventually appearing in the DCEU in the form of Steppenwolf in the extended cut of "Batman v Superman: Dawn of Justice," who is joined by Darkseid in 2017's "Justice League." With plans for a New Gods film on the horizon, Kirby's once-maligned concept is now a driving force behind DC's superhero mythology.


Scott Free aka Mister Miracle was the main character in one of the trilogy of titles that comprised the Kirby's Fourth World, along with New Gods and Forever People, Mister Miracle was the title that hewed closest to the existing superhero comic book trends that readers were accustomed to. Free was an unwitting pawn in the machinations of the New Gods, exchanged as a baby with Darkseid's son Orion to ensure the end of a war between New Genesis and Apokolips. He grew up in Granny Goodness' Terror Orphanage and eventually escaped to Earth where he encountered his mentor Thaddeus Brown, the original Mister Miracle, who was murdered and replaced by Free. His escape broke the hostage pact and freed Darkseid to once again attack New Genesis, as Miracle wandered the world getting into adventures as a circus performer and escape artist.


This powerful Kirby cover for issue #14 of Mister Miracle is one of countless impressive pieces of art from the period rendered by the undisputed "King" of comics, the demonic creatures surrounding our protagonist and his trusty sidekick Oberon are nightmarish, shadowy and disfigured. Mister Miracle stands at the ready, in the center of the page, in all of his heroic glory, presented in a muscular pose that is pure Kirby. This piece of comic art is from Kirby's phenomenal 1970's DC period, a run which enjoys renewed importance in the modern day. Knowledgeable collectors are aware that any comic art associated with a TV or film franchise skyrockets in value whenever a new season or movie is released, and here is a perfect opportunity to get in on the ground floor with Mister Miracle, a character who looms large in the expanding New Gods storyline. Not many know that Kirby based Mister Miracle on fellow comic art genius Jim Steranko, who worked as an illusionist and escape artist in his youth prior to taking the comic book world by storm in the mid-60s.


Anyone who collects comic art knows that acquiring a cover by Jack Kirby is one of the greatest achievements in the hobby, Kirby's art is revered by his fans and peers alike, his distinctive style and influence on the comic book industry puts his work in the top tier of collectability and value, and the addition of Kirby's signature on this piece is certainly an added bonus. The fact that this cover has remained in a private collection since it was picked up at a Sotheby's auction in September of 1992 means that this piece has been off the market for nearly three decades, we are sure our base of art comic collectors will be chomping at the bit to start bidding on this newly available masterpiece.