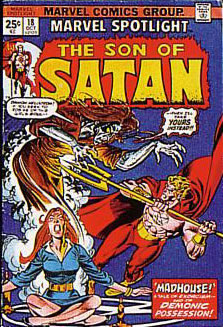 $8
Sold For
1
Offers
PUBLISHER: Marvel
COMMENTS: ow/white pgs
Son of Satan
Read Description ▼
Sell One Of These Inquire About This

Watch
ow/white pgs
Son of SatanCover pencils by Gil Kane. Madhouse!, script by Steve Gerber, pencils by Gene Colan, inks by Frank Chiaramonte; at a party being held by Dr. Wilfred Nobel, party guests recognize Daimon as a famous exorcist and begin peppering him with questions; Son of Satan investigates Wilfreds home, which has burned to the ground.
Artists Information