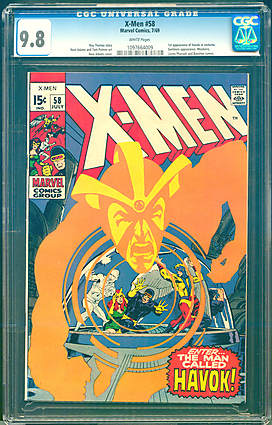 DESCRIPTION
Share This:
white pgs
Adams cvr; 1st app. Havok in costume
Key Comics Collection
Highest GradedThe Sentinels are back, this time controlled by the son of their first creator, Larry Trask, whose helmet allows him to direct the mutant hunters with his mind. His vendetta aginst the X-Men has made him nearly insane and he is hellbound to bring down all of mutantkind. His new and improved Sentinels are more than a match for the individual X-Men, but Havok, Alex Summers, brother of Cyclops, is on hand to help battle this menace. As Trask captures several members of the team it is revealed he is unknowingly a mutant himself, causing his Sentinels to turn against him. Pencilled by the legendary Neal Adams, this issue of X-Men in an important book in the series that deepens the story of the struggle of mutants finding their place in the world and dealing with the bias they were born into, a theme that looms large over the entire X-Men franchise.


This X-Men #58 from the Key Comics Collection is the highest-graded copy, coming in at a staggering 9.8 with an immaculate cover complete with vibrant hues and flawless centering.