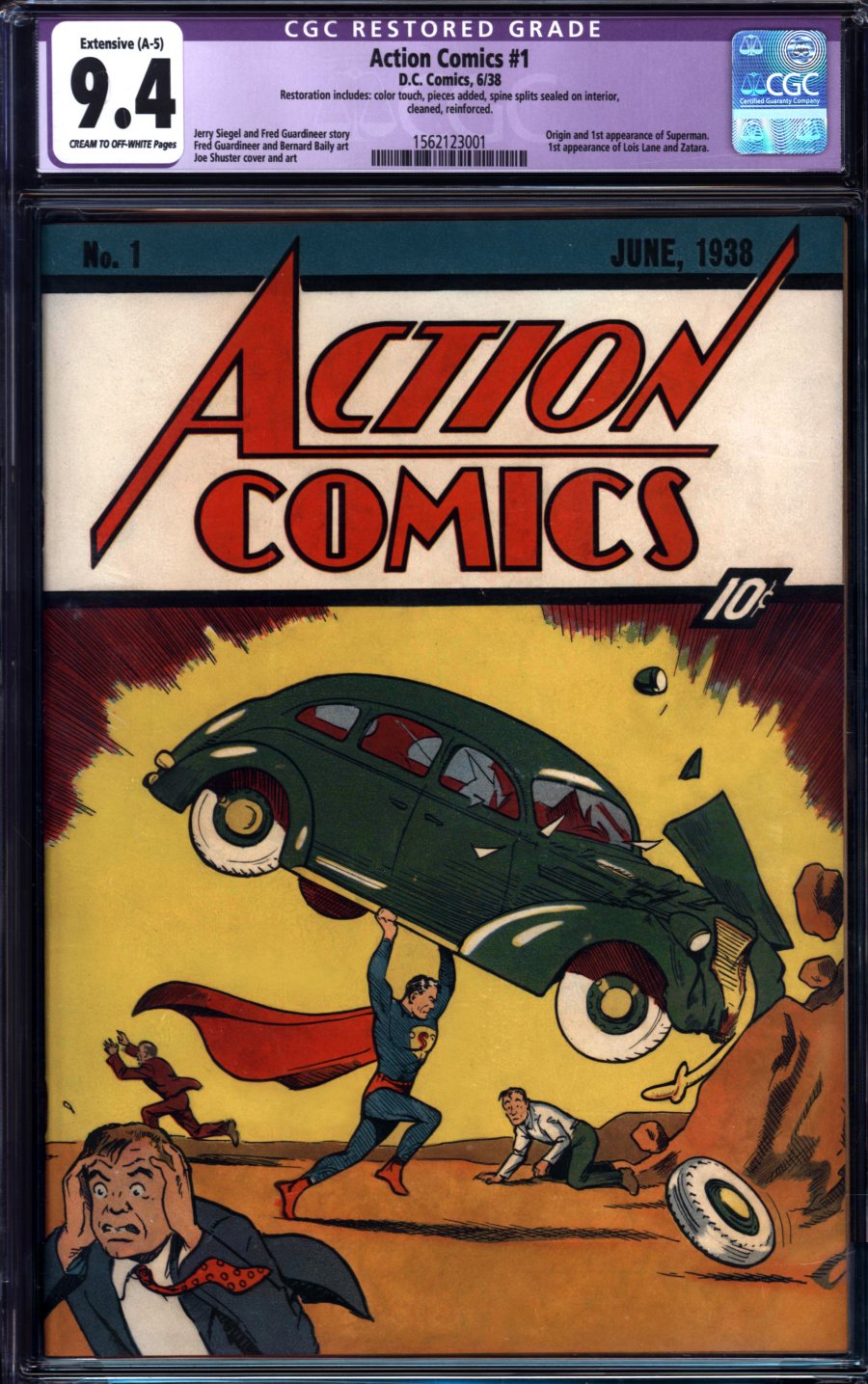 $575,000
Sold For
1
Offers
PUBLISHER: DC
COMMENTS: A 15% BUYER'S PREMIUM WILL BE ADDED TO THIS ITEM AT CONCLUSION OF THE AUCTION
crm/ow pgs; ext (A-5) ct, pcs added, spn splts sled on int, clnd, reinforced
origin & 1st app. of Superman by Siegel and Shuster
Read Description ▼
Sell One Of These Inquire About This

Watch
A 15% BUYER'S PREMIUM WILL BE ADDED TO THIS ITEM AT CONCLUSION OF THE AUCTION
crm/ow pgs; ext (A-5) ct, pcs added, spn splts sled on int, clnd, reinforced
origin & 1st app. of Superman by Siegel and ShusterThe most important comic book in history, Action #1 stands as the introduction of the archetype of all other heroes to come as Superman transcends comics and pop culture as an icon of truth, justice, and the American way!


The extensive restoration work performed on this copy of the, inarguably, most important and valuable comic book in the world, has returned it to a state of near perfection. If you have the means to compete for a copy of the holy grail of comics, you could do worse than landing this highest-graded restored book. While some purists may balk at a restored copy of any comic, this is Action Comics #1 we are talking about here, just take a gander at the iconic Joe Shuster cover, showing the Man of Steel in all of his otherworldly glory. The colors are resplendent, the construction is rock solid, and the professional work done on this book is nothing short of miraculous, giving this copy a newsstand fresh appeal that is likely better than one that could be found by a passerby in 1938. There are currently 75 copies of Action #1 listed on the CGC census, all of which are in a lower grade than this book, except for another 9.4 restored copy. This is an amazing opportunity to bring home the first appearance of Superman, the birthplace of the superhero comic, and one of the most treasured collectibles on the planet, with the bonus of a price break because this book has been made to look ridiculously amazing thanks to some spot-on restoration by some talented folks.