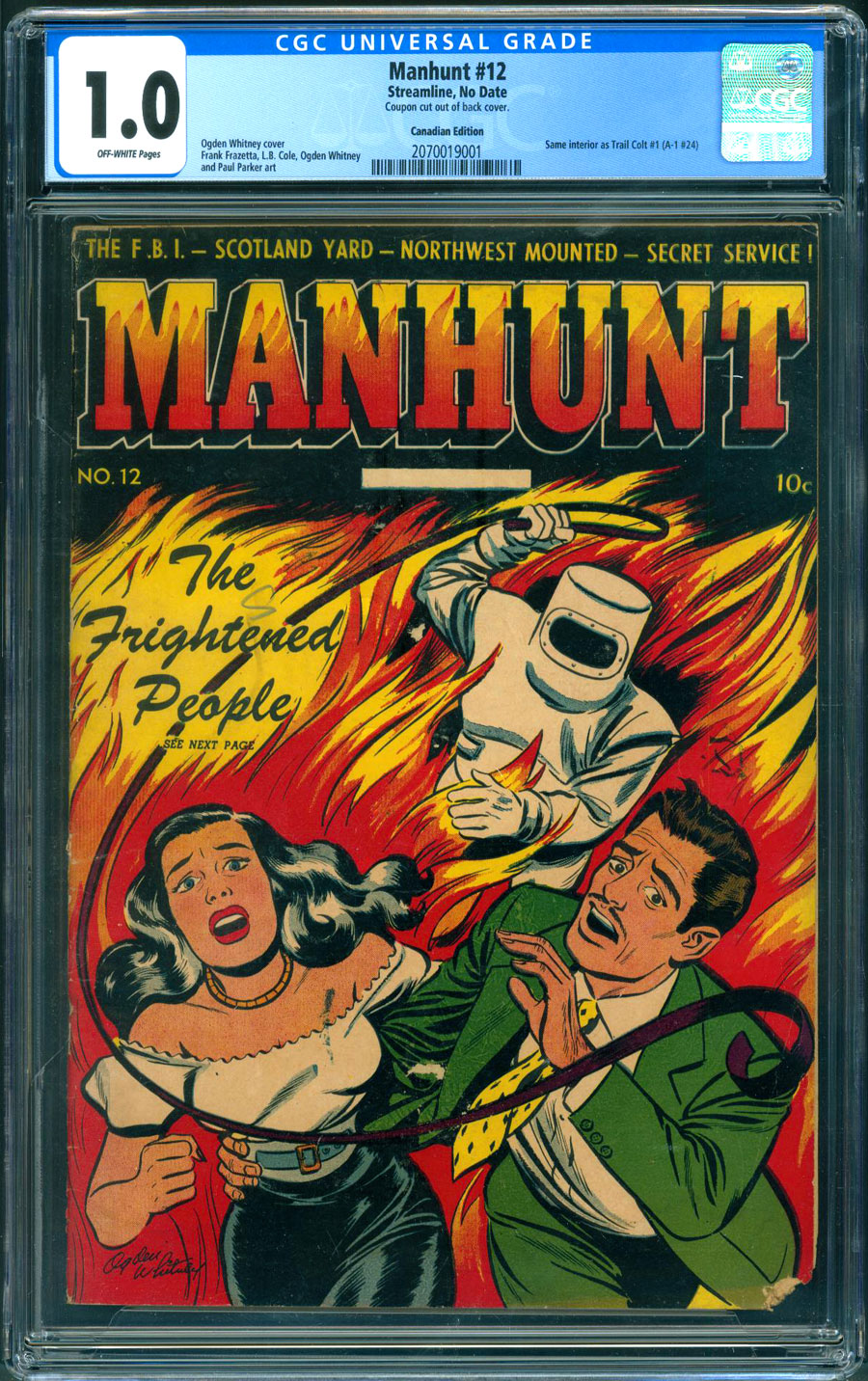 $7,525
Sold For
36
Bids
This auction has ended.
PUBLISHER: M.E.
COMMENTS: Canadian Edit; off white pgs; coupon out bc, ONE OF A KIND
Not supposed to exist! UNIQUE - Ogden Whitney cvr/art, Frank Frazetta, L.B. Cole art
Highest Graded
Read Description ▼
Sell One Of These Inquire About This

Watch
Canadian Edit; off white pgs; coupon out bc, ONE OF A KIND
Not supposed to exist! UNIQUE - Ogden Whitney cvr/art, Frank Frazetta, L.B. Cole art
Highest GradedManhunt #11 was published by Magazine Enterprises in August 1948. #12 should have followed the next month, but for unknown reasons, that issue was never published. Four years later, in 1952, Manhunt #13 appeared, the issue was subtitled as A-1 #63. For more than 70 years collectors thought this book did not exist; Robert Overstreet at first suspected its existence, but eventually dropped the listing completely from his guide. The Gerber photo journals purported that it was never printed, and online comic sources don't even acknowledge the issue.

This year a copy surfaced at a flea market, purchased with several hundred other comics. It features an Ogden Whitney cover and interior art by two legends in the industry, L.B. Cole and "Fritz" aka Frank Frazetta, which only adds to the appeal of this unearthed treasure. The exact history of this issue remains a mystery, but if it is the sole existing copy of Manhunt #12, it could be the holy grail of pre-code comics, and even the rarest published comic book ever.

"After nearly six decades of discovery and documenting throughout our hobby, it seems hard to imagine a published and distributed comic book of which a copy has never surfaced," stated Matt Nelson, president of CCS. "But here it is, a Manhunt #12, opening up the possibility that there are other published comic books we haven't discovered yet. An incredible, exciting find!"

"I've been buying and selling comics for over 30 years. When I was approached with this book, I thought surely, I had bought and sold a copy at some point, but lo and behold, when I checked my database zilch! Then I conferred with my partner, Stephen Fishler, and he agreed he had never seen a copy. We knew we had to have it for our auction," proclaimed COO of ComicConnect, Vincent Zurzolo. "The words rare and scarce can sometimes be used rather carelessly, but in this case, they don't do this book justice, unique, or one-of-a-kind may be better. The book presents so much better than the 1.0 grade, but for the coupon cut out of the back cover."

"Rarely in the history of comics, especially after 50 years exposure of the Overstreet price guide, has a Golden Age book long thought to not exist surface," Bob Overstreet stated. "The title of the book is Manhunt, issue #12. The cover date is blocked out with a horizontal white bar and there is no indicia. There is no publishing information and no date of publication. Its value will be determined in the marketplace."

This extraordinary discovery is sure to be a hotly contested item.