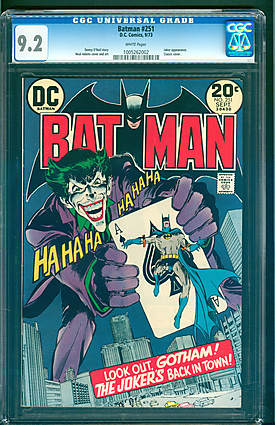 $1,115.00
Last Bid
35
Bids
This auction has ended.
This listing has been remove from the website.
PUBLISHER: DC
COMMENTS: white pgs
classic Adams Joker cvr
Read Description ▼
Sell One Of These Inquire About This

DESCRIPTION
Share This:
white pgs
classic Adams Joker cvrThe O'Neill and Adams overhaul of the Batman title was closely modeled on pulp classics like the Shadow and Ellery Queen, and took inspiration from the gritty, hard-edged cinema of the late 60s and early 70s. Initially hesitant to include the Dark Knight's most famous villain within this framework, the pair eventually relented under the pressure of longtime Bat-editor Julius Schwartz, who hoped for a chance to jump-start the character's sagging sales, reinventing the clown prince of crime in this instant classic. Discarding the gimmicky crimes and cheap stunts that had accrued onto the character's M.O. since the Silver Age and reemphasizing his homicidal nature and ghastly appearance, O'Neill and Adams took their cue from the character's debut appearance. Darker and nastier in tone than his 1950s and 1960s appearances, Adams initially revamped the Joker's look with a more dapper, realistic fashion sense (though later artists quickly worked out how to return to his more iconic look after this initial reboot). Allowing the character to murder with relish and concoct crimes more morbid than comic, the duo achieved the impossible, taking this most camp of villains and bringing him seamlessly within the new, more noirish world they had created for their caped crusader. Nearly every incarnation of the Joker, including the acclaimed Heath Ledger film performance, can be directly traced to this daring and unforgettable relaunch, a classic not only in Adams' body of work, but in the history of Batman in general.