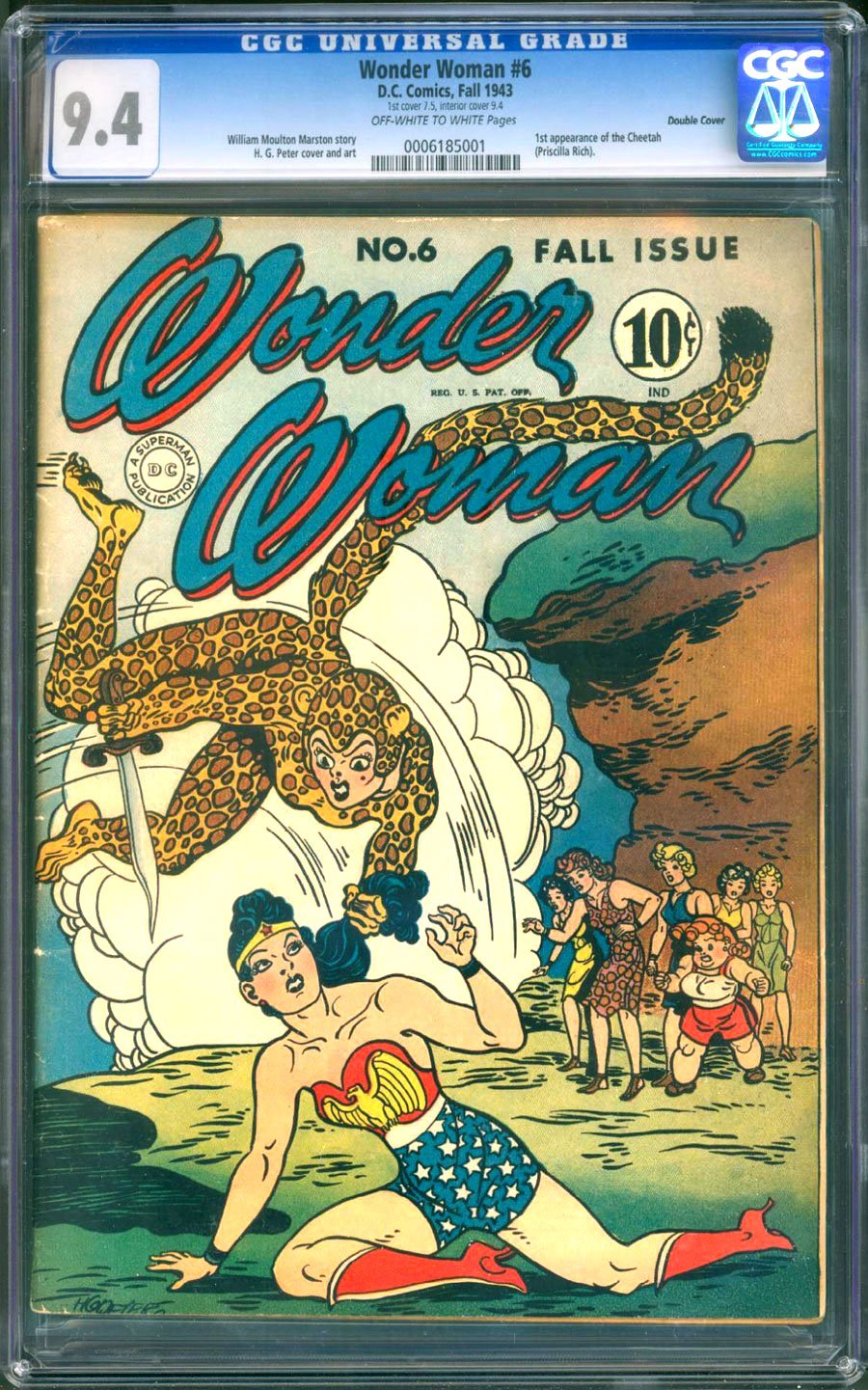 Watch
ow/w pgs DOUBLE COVER!! 1st cvr 7.5, interior cvr 9.4
H.G Peter cvr/art; 1st app. of the Cheetah
DC Premiere Collection
Highest GradedAnd you thought modern supervillain origin stories were crazy? Check out the Cheetah, aka Priscilla Rich, a socialite and general all-around nutcase whose criminal inspiration was a split personality that manifested itself when Wonder Woman upstaged her at a charity event. Her alter ego, the Cheetah, appears as a hallucination in a damaged full-length mirror, causing the already unstable Rich to go full-on bugnuts, dress in a leopard-print leotard, and turn traitor, selling military secrets to the Axis. Told with William Moulton Marston's usual propulsive prose and illustrated by H.G. Peter's florid, hyper-surreal style, this is a neglected classic of the Golden Age, the kind of story that burned into young readers' brains and refused to let go. Later writers and artists would try to rework and re-imagine the Cheetah's origin, leaning into more mystic and fantastic realms, but the sheer unadulterated lunacy of this early gem is mighty hard to top.


Most early Wonder Woman issues fell victim to wartime paper drives, spotty distribution, and neglect from boy comic hoarders who didn't like icky girl books (and man, were they wrong). Thus, this comic is incredibly rare, maybe in the top-five-rarest Golden Age DC keys -- there are just over 75 copies on the census, and if more than 100 to 125 copies are in existence, we'd be shocked. When copies do surface, throw out the price guide.

This remarkable double cover copy of Wonder Woman #6 may not look it at first glance, but rest assured, the interior cover is indeed the highest graded overall, it is unfortunate that the act of slabbing a book prevents the interior cover from being viewed, but it is certainly safe and sound, and will remain so for years to come thanks to the good folks over at CGC. The visible cover is also in quite good condition with strong colors and any wear confined to the spine area. Have we mentioned that this comic is red hot at the moment as we await the release of “Wonder Woman 1984” which will feature the hilarious Kristen Wiig as the crazed villainess, the Cheetah? It is with complete certainty that this comic will rise in value and be anointed a big-time key upon the release of the DCEU flick.