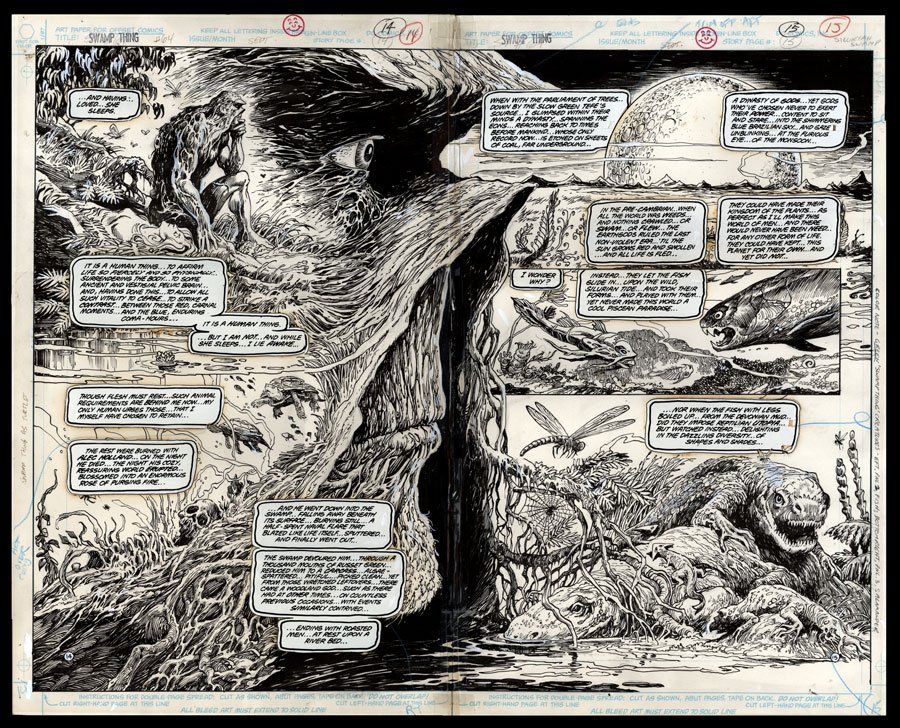 Watch
Stephen Bissette pencils/Alfredo Alcala inks; pages 14-15; 1987; image size 23" x 18"
Alan Moore story!This awe-inspiring-double-page spread by Bissette and Alcala, illustrates the astonishing craft, artistry, daring, and beauty of this incredible period from the twilight pages of Alan Moore's groundbreaking tenure on Swamp Thing. Like the art from the entire run, this image manages to be beautiful, terrifying, moving, inspiring, and immersive all at once, capped off with a simply gorgeous profile image of our mossy hero at dead center, framing one of Moore's characteristically psychedelic diversions, transporting us into a universe of majesty, wonder, and dread. Boasting feathery, deft inks from Alfredo Alcala, one of comics' most revered and admired inkers, whose lush style defines and caresses Bissette's brash, energetic compositions, this is one of the late-period masterpieces from an historic series of comics. Art from this run is extremely hard to obtain, with a cult following of collectors happily devouring and hoarding the few pages that creep out into the market. Not only is this therefore a rare treat, but a simply stunning piece, one of the finest examples of Modern Age comic art we've ever seen or offered, which is guaranteed to excite and inspire bidders and art aficionados as its closing date approaches. Pen and ink. Art is in very good condition, there is some yellowing around the caption paste-ups and tape where the two boards are joined in the middle.
Artists Information