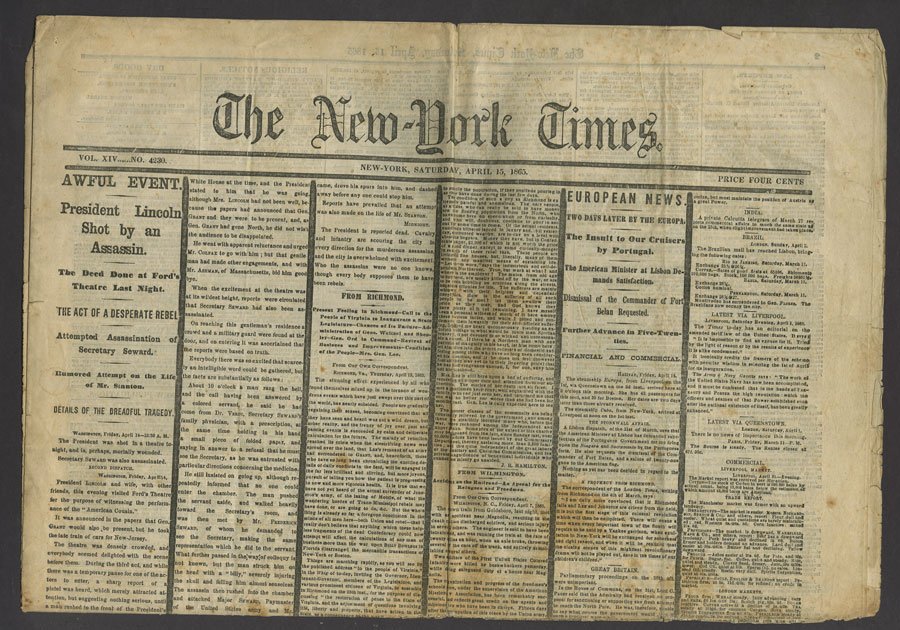 $3,211
Sold For
27
Bids
This auction has ended.
COMMENTS: Some minor staining, 9" tear at fold on first page, 3" tear at same fold through rest of the paper, pages are still supple and no fading. Very rare and scarce!!
NY Times from the day after President Abraham Lincoln was assassinated!! From April 15th 1865!
Treasure Trunk Collection
Read Description ▼
Sell One Of These Inquire About This

Watch
Some minor staining, 9" tear at fold on first page, 3" tear at same fold through rest of the paper, pages are still supple and no fading. Very rare and scarce!!
NY Times from the day after President Abraham Lincoln was assassinated!! From April 15th 1865!
Treasure Trunk CollectionIn what has to be one of the most important moments in the history of America, the assassination of President Abraham Lincoln by John Wilkes Booth was an earth shattering event for a nation that was still healing from the trauma of the Civil War. At the time of publication, the name of the assassin was still a mystery, but the conspiracy to kill the president would soon be uncovered. After the end of the Civil War many southerners were hellbent on continuing the conflict despite the surrender of Robert E. Lee and the dissolution of the Confederacy, and Booth was a determined and ultimately successful angel of vengeance in the eyes of many. This issue of the New York Times was published on April 15th, 1865 and brought news of the “Awful Event” to the citizens of New York, which was sure to have caused a great deal of emotional upheaval for city and the country, much like the assassination of John F. Kennedy 100 years later.


The level of hostility towards President Lincoln was in part an end result of the Emancipation Proclamation, a document that Lincoln issued during the war that in essence freed the slaves being held in Confederate states, which had tremendous ramifications for the life of southern slavers, whose entire economy and way of life was forced to undergo some extreme changes, which caused a great deal of upheaval for years after the war. Despite the antipathy Lincoln knew he would incur his actions would eventually set free over a quarter of a million slaves from bondage and purge the nation of the blight of human servitude. Although the transition would take time, Abraham Lincoln set the country on a course of freedom for all citizens which continues to have a positive influence into the modern day, while the country still has some work to do to achieve true equality, President Lincoln would end up paying the ultimate price for his efforts to move the country forward and create a better nation. This is his great legacy, and why he is considered one of the most important and respected presidents in the history of the U.S.A.


Newspapers were the primary form of transmitting information in the 1800s, and the New York Times, only 14 years old at the occurrence of the assassination, is still going strong today. The nickname “The Gray Lady” has been bestowed on the paper due to its impressive vintage and staying power, keeping New Yorkers and Americans across the country informed of important news every day for almost 170 years now. This particularly significant issue has made it down through the ages, lasting a remarkable 155 years in a respectable state of preservation, as part of the Treasure Trunk Collection, to end up in our current Event Auction, so that you can now take a chance at owning this remarkable piece of the American story. The paper is in VG/F condition, it exhibits some minor staining on its pages, which are still supple and have not faded over time, there is a 9” tear at the fold of the first page and 3” tears at the same location throughout the rest of the paper. This is quite an impressive discovery considering the scarcity of copies that have survived from the period, history buffs take note!