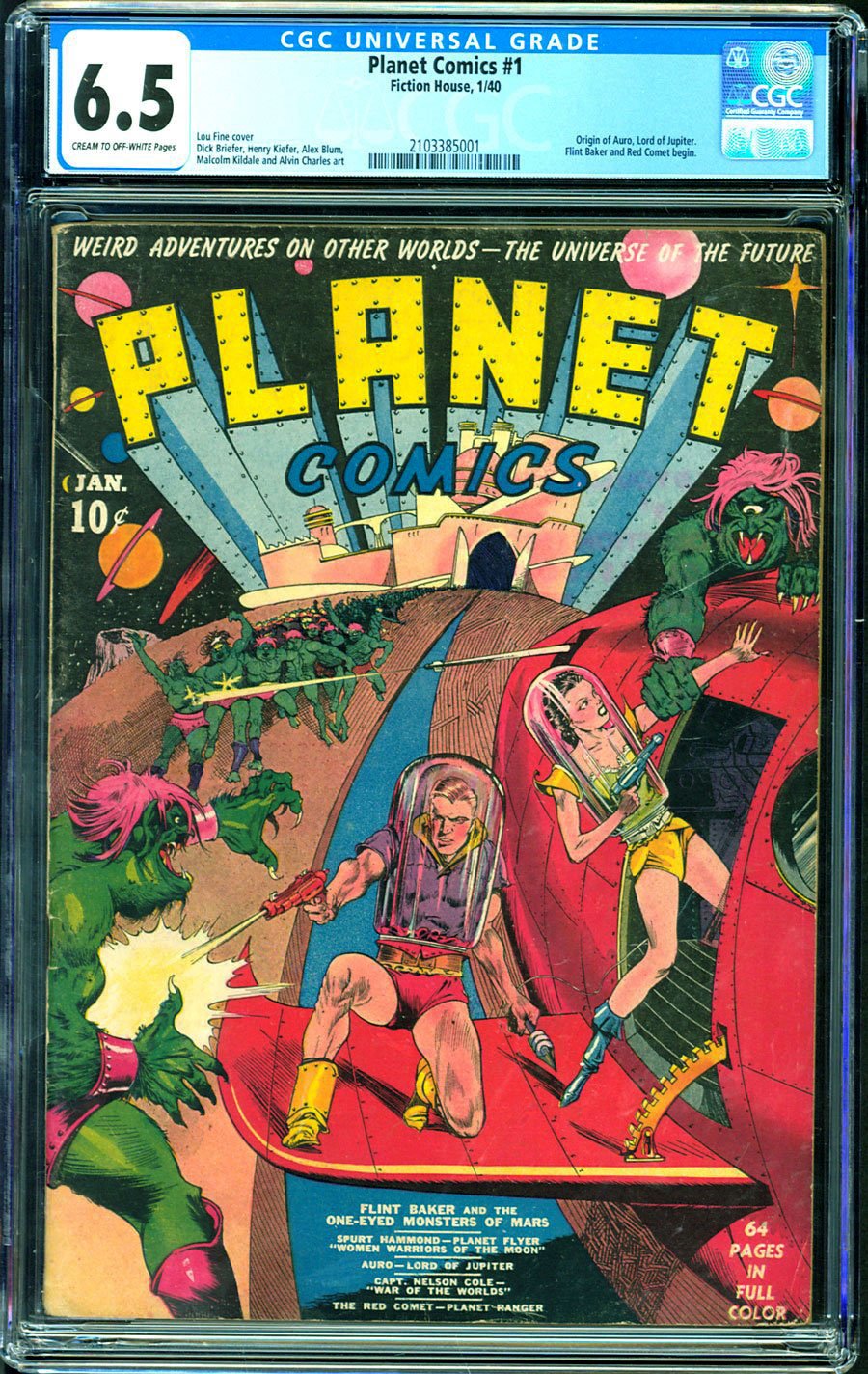 Auction Ends In
$3,100
Current Bid
13
Bids
NEXT MIN. BID: $3,200
Bid Confirmation
You are about to submit a bid of . If you win this auction, you are legally obligated to purchase the book. Are you sure you want to continue?
Don't Show Again (except when higher than min. bid)
(No Reserve)
PUBLISHER: Fiction House
COMMENTS: crm/ow pgs
Eisner/Fine cvr; Kiefer art; origin of Auro, Lord of Jupiter, Flint Baker and Red Comet begin
Highest Graded
Read Description ▼
Sell One Of These Inquire About This

Watch
crm/ow pgs
Eisner/Fine cvr; Kiefer art; origin of Auro, Lord of Jupiter, Flint Baker and Red Comet begin
Highest GradedThe first comic book devoted exclusively to science fiction, the scrappy genre that grew from the sweaty fever dreams of Victorian fantasists and exploded in the pages of the pulps, to eventually become the major American pop genre, and the modern mythology that continues to captivate the attention of the world. Planet was the four-color inheritor of publisher Fiction House's sci-fi pulps, boasting spectacular covers, soaring storytelling, barrel-chested heroes, and the eye-popping art of most of the period's major illustrative talents. Soaked in mystery, drama, high science, and a generous dose of cheesecake, these majestic works brought the grand scale and brash spirit of sci-fi to a new readership of young and impressionable minds, many of whom, inspired, went on to create their own worlds in galaxies far, far away, and in final frontiers around the universe. It's impossible to stress how important this series was to sci-fi history and a glance at these remarkable covers will seem like a Rosetta Stone for modern science-fiction enthusiasts.

Planet Comics #1 was released as a companion book to Fiction House's Planet Stories pulp novels. The comic features art by legends Will Eisner and Lou Fine as well as Murphy Anderson (under the pen name Leonardo Vinci). The book also features the origin of Auro, Lord of Jupiter and appearances by Flint Baker, Spurt Hammond, and The Red Comet. This is an incredibly ambitious cover, which announces Planet Comics as a step above the competition, the sheer amount of action taking place is a testament to the skill and vision of Lou Fine, possibly the very first master artist in comics. Predating a trend in WWII comics of frenzied action that takes time to soak up as there is so much going on, this is a prototype that would influence the works of Alex Schomburg, Jack Kirby, and Al Avison a few short years later. The colors on this copy are strong and remain vibrant, from the powdery pinks to the swampy greens, the 80 year vintage of this book has done little to degrade its powerful cover image. The slight signs of wear around the perimeter are barely noticeable thanks to the amount of detail crammed into Fine’s design. There are only a small amount of these copies out there, so expect some serious competition if you are planning on bidding on this ground zero sci-fi comic.