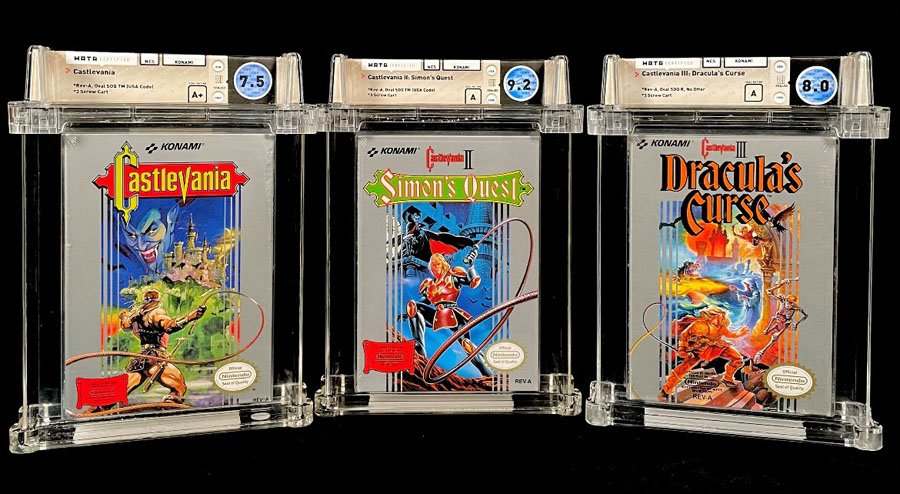 Auction Ends In
$3,100
Current Bid
13
Bids
NEXT MIN. BID: $3,200
FYI there's no need to include decimal points(.).
Bid Confirmation
You are about to submit a bid of . If you win this auction, you are legally obligated to purchase the book. Are you sure you want to continue?
Don't Show Again (except when higher than min. bid)
(No Reserve)
PUBLISHER: Konami
COMMENTS: This is the complete Castlevania Trilogy for the NES; All of the games are sealed and Wata graded; See extended comments.
Read Description ▼
Sell One Of These Inquire About This

Castlevania 2: Simon’s Quest, finds the title character in a quest to recover the five pieces of Dracula’s corpse as he attempts to destroy the Prince of Darkness once and for all. With each piece of the corpse giving Simon a new and unique skill, players can bring all five pieces to the ruins of Castle Dracula and finally defeat the monster who has placed a curse on them. As the nights become days and the days become nights, players must rush to finish the game within eight days to achieve the best possible ending of three.

Rounding out the Castlevania series is Castlevania 3: Dracula’s Curse, a game that serves as a prequel to the previous two installments on the NES console. This game, which is set a few centuries prior to the first entry, lets you take control of Trevor C. Belmont (ancestor to Simon), as he transforms into three new characters: Grant Danasty, Sypha Belnades, and Alucard, Dracula’s son. With gameplay very similar to the original, and presenting multiple endings like the sequel, Castlevania 3 combines some of the best features from both games to offer a fun-filled vampire-slaying good time!